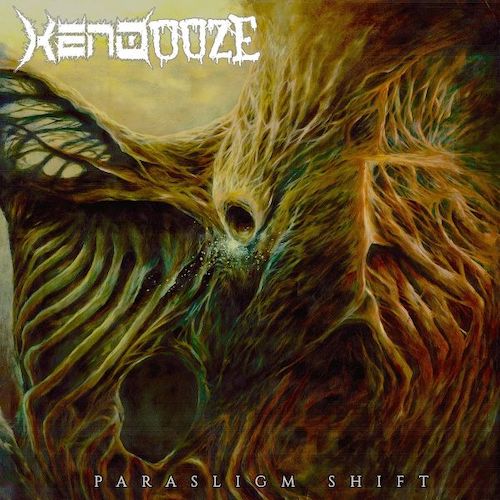 Imagine what would happen if you could buy bags of death metal, crust, grindcore, and powerviolence at your local market, throw big handfuls of all that stuff into a blender, liberally lubricate it with alien blood fresh from the refrigerators at Area 51, spice up the mix with amphetamines and lysergic acid, puree the shit out of it, and then chug it straight down without breathing. Sound good?

Actually, you don’t have to tax your imaginations, you just have to listen to Parasligm Shift, the debut album by the deviant three-piece Phoenician band Xeno Ooze. You’ll have the chance to do that on November 1st, which is the day of its release by Last World Records. But in the meantime you can chug down “Xenological Warfare“, which is the opening track from the album that we’re premiering today. 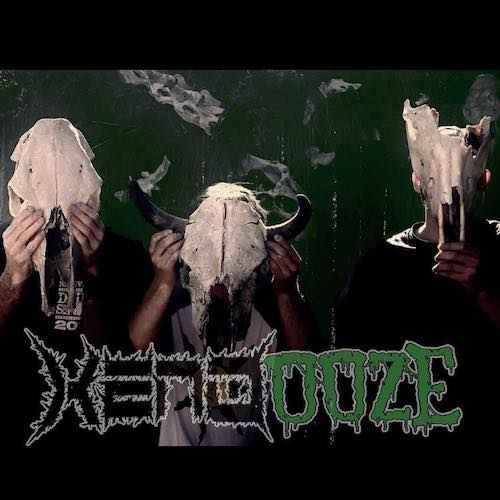 You can probably tell already from the album title that these guys enjoy clever wordplay, which is also evident in song titles like “Slime Against Humanity”, “Wizard of Oooze”, and “The Whole of the Maw”. What will be evident from the music is that they’re also criminally insane.

“Xenological Warfare” packs a ton of fast-twitch changes into its 2 1/2 minutes, all of them violent. Immediately, it launches a cyclonic barrage of light-speed drumming and heavily distorted, near-atonal riffing. Suddenly, the band cut to start-stop bursts of skull-busting viciousness, and hoarse carnivorous howls issuing grotesque proclamations.

The mauling and grinding resumes, but then converts to a gallop, marred by crazed fretwork and unhinged screams. The war-zone drum fusillades resume, along with new effusions of guitar mayhem — and then the song drags abysmally downward, before one final screaming melee and one last sequence of pile-driving punishment.

If you’d like to get brutalized by a couple more previously released tracks, we’ve got one of those (“Dungeon Blaster”) below, along with our premiere, and you can check out another (“The Whole of the Maw”) via this link to CVLT Nation.

P.S. The amazing cover art for the album was created by Arifullah Ali.