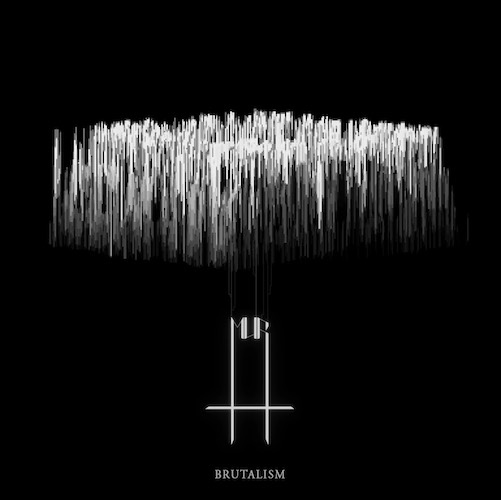 With their self-titled debut EP released in 2014, the French band Mur (whose six-person line-up includes former members of Today is the Day, Glorior Belli, Mass Hysteria, Comity, and Four Question Marks) began feeling their way, searching for an identity for their music and beginning to establish one. When you listen to their new full-length record, Brutalism, which will be released on October 25th by Les Acteurs de l’Ombre Productions, it becomes apparent that they have arrived — at a place where their confidence is strong and their identity (albeit a multi-faceted one) well-defined. It isn’t so much a sea-change in sound compared to the EP as it is a giant, adventurous stride ahead on the path they began five years ago.

The album is a fascinating experience because it is such a dynamic one. It offers constant surprises, but does so without losing the bonds that forge all the experiences together into a whole, and without sacrificing the explosive, searing intensity that’s the main hallmark of the record. Previously we premiered a song from the album (“Third“) and separately reviewed another one (“I See Through Stones”), but today we have for you a stream of the complete album — and a few more impressionistic thoughts about the music (okay, more than a few). 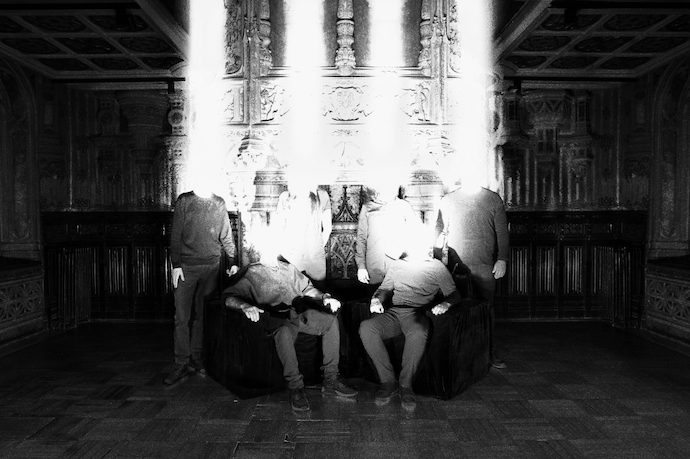 As already forecast above, Mur‘s compositional techniques display an affinity for dramatic change. And so, while hardcore and black metal are the main genre ingredients in Brutalism, they’re not sufficient to satisfy Mur‘s ambitions.

That song we premiered earlier, “Third”, is a good example of what we mean. It begins with mesmerizing melodic reverberations, a tonal tapestry of shimmering, quivering, and chiming sounds that are strange but alluring. But it also serves the purpose of magnifying the shock value of what happens when the sound explodes in a shattering, physically ruinous, upheaval. After that stunning storm-break, the drumming shifts into a sequence of hammering rhythms as the vocalist screams like a man turning himself inside-out through force of will alone.

The riffing roils with incredible turbulence but creates sequences that have a pattern, and the rhythm section breaks into jackhammering grooves as well, yet the music never relents from its cyclonic intensity. Dismal, shrieking leads slowly writhe or extravagantly flare through the titanic gales of sound, and terrifying chords rain down like the trumpets of Armageddon, segmenting the stunning sonic spectacles that Mur deliver.

“Third” isn’t the only point on the album when Mur create such stunning contrasts, though the juxtapositions are never the same. You get an early taste of this in the opening track, “Sound of Dead Skin”, which begins with unexpected electronic pulses before it erupts in a typhoon of sound, speared by shrill, shimmering leads and later blanketed by cascades of grief-stricken melody. That opener is also absolutely pulverizing, proving right away that Mur are capable of splitting concrete with the force of their clobbering assaults, while also unsettling your brain with doses of strange, twisted riffing.

“Sound of Dead Skin” also reveals the band’s capacity for raising the drama of the music to world-ending heights, and “I Am the Forest” is even more compelling proof of that. It creates a terrifying spectacle, before its immense magisterial chords and crushing rhythmic pile-drivers give way to another surprising change, in which unnerving electronics and long chord reverberations raise visions of the void.

“Die Kinder Tanzen Um Das Feuer Desjenigen Der Das Licht Bringt” provides another twist in the path, serving as an interlude of electronica, fusing deep bass-level pulses, waves of acidic synths, and echoing percussive effects (which is what leads into the hypnotizing sounds at the outset of “Third”).

There are so many unexpected occurrences across the reach of the album, from the almost jazz-like but also psychedelic bass-and-guitar instrumental at the outset of “My Ionic Self” (a song that continues to flip your head upside down with almost each passing second, perhaps more unpredictably than any other track) to the body-wracking rhythms that bring “Red Blessings Sea” to a close.

The wobbling, pounding electronic sounds of the introduction to “I See Through Stones” are another surprise. A hammering industrial rhythm carries that song forward, joined by heated writhing guitars and equally scorching vocals. Twisted, blaring melodies combine with gigantic grooves; dissonant spearing tones emerge from eruptions of razoring chaos; bursts of guitar frenzy seethe, simmer, and reach heights of lunacy while the rhythm drives your head like a piston. It ends abruptly, leaving only the sound of your own heavy breathing — just a brief pause before the nightmarish opening sounds of “Lividity” set your teeth on edge.

There are times when it sounds like the brass section of a symphony orchestra have made an extravagant guest appearance (“You Make I Real”), and other times when spacey synths seem to transport us beyond the confines of the solar system, to reveal awe-inspiring visions of vast nebulae, and of other suns dying in catastrophe, as our own will in time. That, in fact, is how this extraordinary album ends, with “BWV721”.

We’ve been rambling on at greater length than was probably advisable, but don’t worry — if you’ve actually managed to get through all the verbiage, not all the surprises have been spoiled, and there’s no way mere words could actually capture the overpowering destructive force or head-spinning adventurousness of the album anyway. As a final piece of advice, we’ll just say that you should start at the beginning of the record and be prepared not to leave it until the very end. It’s best experienced that way, and it won’t let you get away even if you wanted to.

Brutalism was recorded at Onetwopassit Studio by Yacine Mdarhri Alaoui, and it was mastered at studio Sainte Marthe by Francis Caste. The cover art was crafted by Alexandre Michaan.

LADLO will release the album in a digipak CD edition on October 25th, and a double-LP vinyl edition will be available soon, along with shirts and patches.

One Response to “AN NCS ALBUM PREMIERE (AND A REVIEW): MUR — “BRUTALISM””