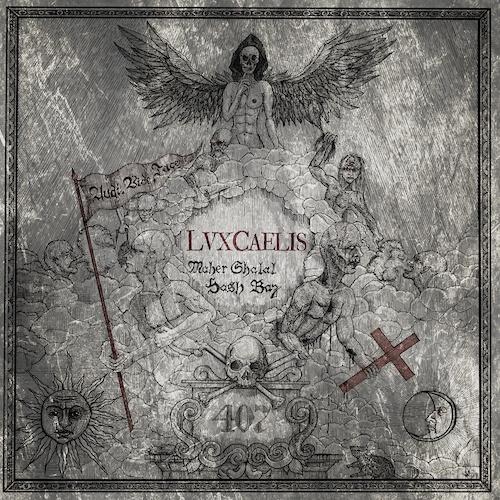 Now fourteen years into their existence, the Chilean black metal band LvxCaelis have produced their strongest work yet, a ravishing third album entitled Maher Shalal Hash Baz that will be released by Lamech Records, fittingly on October 31st.

Pursuing ancient occult and mystical themes across seven tracks, the trio of Irad (guitars/vocals), Nimrod (bass), and Frater B. (drums) create a sonic tableau of varying sensations, from plundering cruelty to chilling reverence, from crushing bleakness to carnal swagger, from terrifying splendor to chaotic ecstasy — and all of it cloaked with a mantle of menace and mystery. Today we give you the chance to hear all of it. 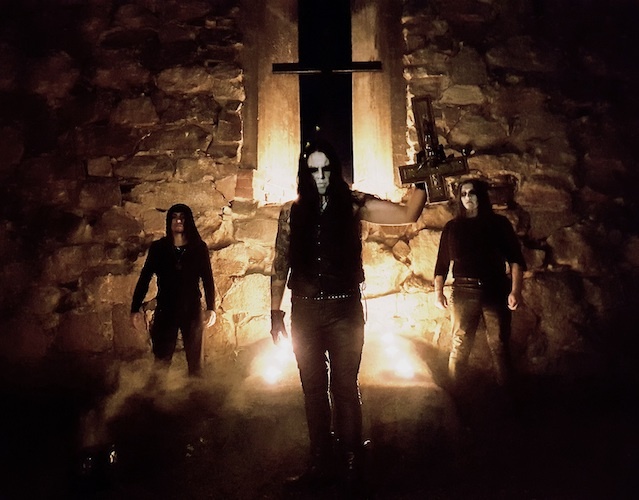 The ancient roots of the music’s inspirations are signified in the album’s title, a name twice-mentioned in the Old Testament book of Isaiah — the name of a prophesied child whose birth would be a confirmation of Isaiah’s dire forecasts of destruction, and which can be understood as meaning “Hurry to the spoils!” or “He has made haste to the plunder!”.

And so, LvxCaelis themselves seem to have created music of prophesy and destruction that ranges beyond the mundane planes of existence. That much is evident immediately, in the dynamic movements of opener “Beyond the Falling Stars”, announced by bleak ringing notes, deep bass reverberations, tumbling drums, and flesh-scarring snarls. The guitars begin to boil in a dismal fever and the drumming becomes faster and more maniacal.  As is true throughout the album, the drum rhythms change constantly, and here  become more measured and then surge into a blasting fusillade as the riffing becomes more fierce and fiery.

Back and forth it goes, this pattern of bleakness and ferocity — and then Frater B. launches a syncopated beat and the riffing turns to strummed, punk-like chords before the blasting resumes (along with tumbling tom work) as the drive-train for crazed, roiling riffage.

That first track exemplifies the multi-faceted nature of all the songs, which include the grim and brazen “Fading into Golgotha”, whose cascading viciousness is entwined with the climbing sounds of terrible splendor and flickering guitar leads that are twisted and unearthly, as well as the heavy dose of sonic oppression and misery that is “Throne of Doom”, whose lurching cadence and groaning, morbid chords yield to a bout of methodical chugging laced with queasy moaning melody, and eventually to a rumbling gallop with a berserk guitar solo that makes liberal use of the whammy bar for extra insanity.

The guitar tones in the music are encrusted with the detritus of decay, and the minor-key melodies are often sinister and gruesome, yet there are trilling leads, as in “The Beginning was the End”, that seem portentous, conveying something like the hallowing of Death, and rising chords that seem to herald a terrible advent; and in that same song, everything eventually slows and the music becomes a ponderous, agonized march to the gallow’s tree beneath grey, sodden skies.

There are further episodes of punk rhythms and strummed rocking chords (“Kiss the Skull”) as well as one more soloing spectacle — a gleaming, swirling, soaring, diving, and spasming performance in “Raising Above the Demiurge”, which becomes the prelude to an ecstatically quivering guitar harmony over tumbling drum progressions… and then an eerie ambient drift into the outer reaches of the cosmos, or into another dark dimension.

A few surprises await in the album closer, “Awakening the Final Chaos”, which is vicious and incendiary, desolate and delirious, as the title might suggest, but also suddenly transforms, the violence replaced by moody acoustic picking and the utterances of a craggy baritone voice. which paves the way for a slow guitar lead that weaves a dolorous but mystical and alluring melody.

The entire experience turns out to be mesmerizing, but certainly not lulling — there’s no comfort to be found here, only death and the divination of terrible infernal mysteries.