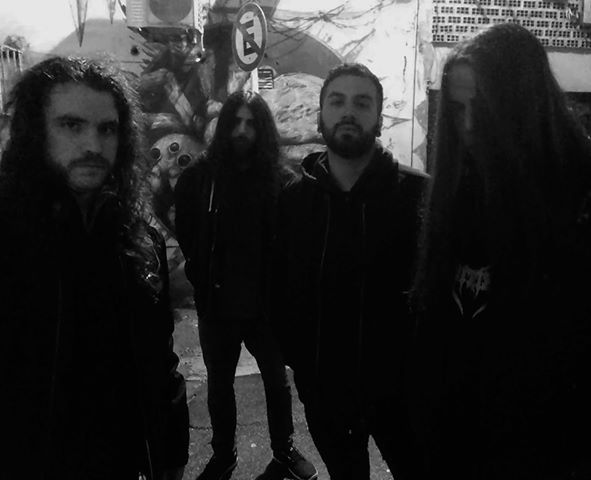 (With pleasure, we present Comrade Aleks‘ interview of Nicolás Ballarini, drummer and co-founder of the Argentinian death metal band Morte, along with excerpts of their music.)

You know – I’m always greedy for almost everything with a “doom” tag upon it. Thus I’ve found Morte from Buenos Aires, Argentina, and it was quite an awkward situation ‘cause, listening to their violent and bloody album Miasma, I started to calculate how much doom they really have in their death.

Yes, it’s the same controversial situation as with Cianide or Autopsy, when death metal influences certainly dominate over everything, but so what? Here we have this interview with Morte’s drummer Nicolás Ballarini, and as you will get, this band absolutely fits the “no clean singing” tag.

Morte was formed in 2013. What were your core influences? What formed the band’s sound?

Morte was strongly influenced by the Scandinavian death metal of the early ’90s: Entombed, Dismember, God Macabre, old Darkthrone… When we incorporated the HM2 into the guitars we convinced ourselves it that was the perfect sound; it made us feel in the veins of Swedish death metal. Obviously, we also have influences from many other subgenres of extreme metal.

The EP Lento descenso a la putrefacción saw the light of day in 2016 — how did you spend the first years before this release?

In the beginning we were only Leandro on the guitar and me, Nicolás, on drums. We had just the first parts of “Reliquia de Huesos”. Being only two members we were not very constant. In 2014 Ramiro joined on bass and Facundo in the voices, and that made the project begin to grow as a band. When we had a set of 7 songs we debuted at an event called “Combustion Fest” in April 2015 with local bands of grindcore, sludge, and death metal.

Then we participated in many other events, and at the end of that same year we started recording the debut EP.

How was it back then? Is this music popular in your area? Did you have problems with organizing gigs?

At first we had a good reception from the public. We were invited to participate in various parts of the city, and we also had the opportunity to travel to another city for Criminal Metal Camp, a great festival that takes place in Cordoba for three days once a year. Although the style is not very popular here, there is a circle of people who support extreme metal bands and organize these events.

Morte tends toward a quite extreme form of death doom (or death with doom elements?) in this EP. This genre doesn’t have much variation — how do you see band’s features considering this?

What characterizes the band mainly is the sound. Our way of composing does not point to the virtuous, we try to generate an atmosphere between the aggressive and the slow. We do not think much more than the structure and some details, honestly. Some people have said that we reminded them of old death metal bands, and that is enough for us.

There are slowed-down parts in your songs, like Asphyx and Autopsy have. Do you see doom elements as a part of your sound?

Yes, sure. Maybe we don’t have elements of the doom as slow as, for example, Worship (Ger) but we consider that we have them. Actually we are currently composing much slower songs.  We don’t want to get to funeral doom, of course … but be slower and darker.

Morte’s lyrics are written in Spanish, and there are samples from horror movies in your songs, but I’d like to clarify — what are your songs about?

At the moment we write about murders, illnesses, post-death void, black plague, Vlad Tepes, the inquisition, classic horror movies… We don’t necessarily give the album a general context; we can vary the theme in each song. Always keeping a line, of course. 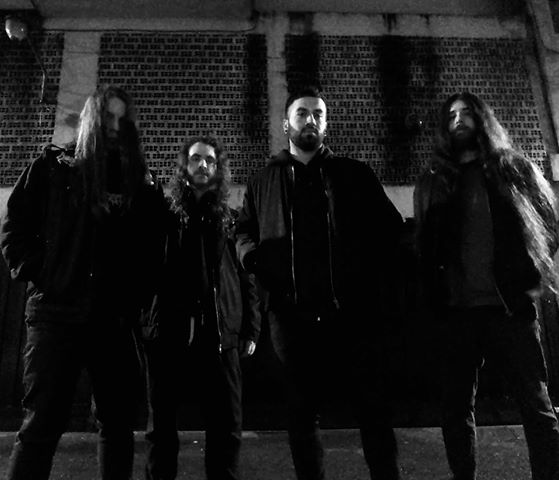 What draws you to such topics? Why do you find them so appealing?

We grew up with these movies, and it is an honor to incorporate them into our music. They are the reflection of the darkest sides of human beings. Death is something that dwells in the mind of any person.

Which movies would you mention as your influence on this album?

We always have classic horror movies as a reference. Miasma contains two lyrics inspired by Friday The 13th and Evil Dead, with their original fragments as intros. There are many ideas regarding horror movies.

The previous EP includes The Texas Chainsaw Massacre and A Nightmare on Elm Street.

Usually bands use their mother tongue in their songs when it’s important for them to keep their identity or when they have problems with expression in English. What about you?

It’s not for identity or for having problems with English. Spanish is our native language and it was simply more natural for us to write that way. In Spanish we are more specific when it comes to detailing our lyrics. In Argentina there are many bands who write in English, not badly. We do not plan to do so at the moment.

You’re from Buenos Aires. How much of this city is in Morte? Can you tell that your music is a product of your environment? Even if it shows itself in some details?

Our songs have nothing of our city. It does not inspire us, it influences us. Currently our country is in crisis. Economically, musicians have no support here. That makes the commitment between musicians and organizers stronger. When we refer to underground music, we mean commitment and effort. Our society consumes more popular music.

Historically the country went through cruel trials of dictatorships not that far ago. Didn’t these events influence your songs?

That does not affect our songs. We have no political positions when we write the lyrics. Our art is based on death and darkness.

What’s the local death / death-doom scene like? Do you have common places of meeting and gigs in Buenos Aires?

There is no exclusive death / doom scene, it is extreme metal in general. We don’t know so many bands in Argentina that do precisely death / doom. The scene is not very big, we are the same old faces, and there are not so many places to give a good show.

Anyway, you can always find an event to attend. The bands and the organizers are always ready. Commitment and sacrifice are seen.

Your full-length Miasma released more than year ago has striking, sick artwork done by Felipe Lovizio Rodriguez. Did you take the complete work from him or did you set a task before him to create an individual work?

Lovizio’s designs regarding Morte are totally exclusive. We gave him our ideas and he was showing us artwork previews. Our idea was about a medieval cover, black plague, sick corpses dying… 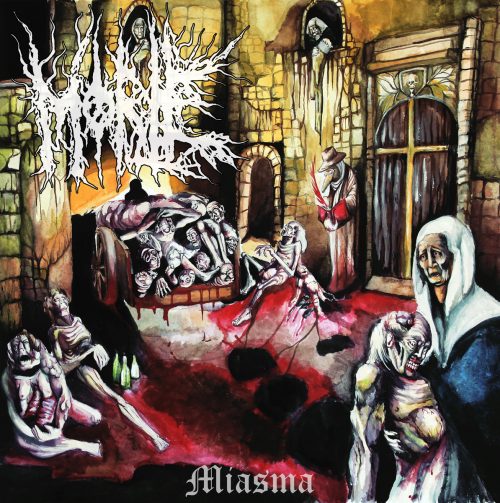 May I ask you what kind of image you wanted to get from him?

His style complemented very well with the themes that our songs encompass. The facial expressions of horror and the texture of landscapes with watercolor painting were fundamental to the music we do.

How much time did you spend creating Miasma in a studio? When did you decide that it’s done?

We had a full session of 8 hours to record drums and bass. Then we had another 4-hour session to record the guitars. The mixing and mastering of the album was independently worked by Facundo, currently guitar and vocals.

How do you see the strong sides of Miasma? Do you feel satisfied with this work?

The strong side is in the interpretation and composition. Particularly we notice an evolution compared to the previous elements. At that time, each album that came out met our expectations. In retrospect, you always see things to improve.

The album was released more than year ago; are you already working on new stuff?

We are working on new songs for the next EP. We still have to finish some lyrics. It’s like a new start for us because we changed to a lower tuning and have incorporated a new bass player, Jimbo.

Lately we frequent bands like Spectral Voice, and Phrenelith, among others … That expands our influence when we compose.

We keep the line, more aggressive in the faster parts and darker in the slowest ones. We are very eager to present our next EP.

We are very grateful to you, Aleks. Diffusion is a very important support for all musicians. It is an honor for us. Don’t stop trusting death metal, every year there are many releases and very good music. Reborn and growing day by day. It will never end…