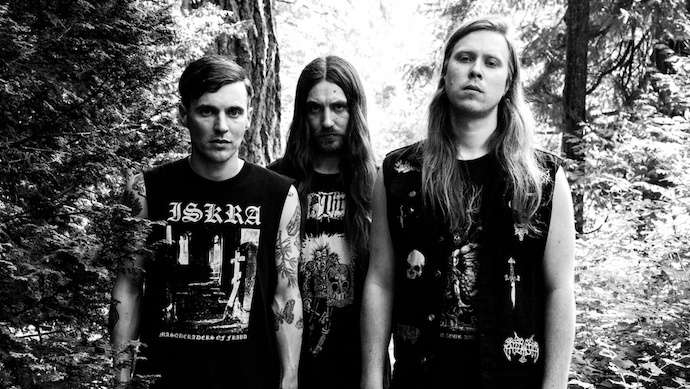 (For the second day in a row we have a show review by Andy Synn, this time devoted to performances by Dawn Ray’d, Underdark, and Arboricidio in Andy’s hometown of Nottingham, UK, on October 25th, 2019.)

Two shows in two days? How rock and/or roll of me!

All joking aside, seeing two of the UK Metal scene’s current standard-bearers – Conjurer yesterday, Dawn Ray’d tonight – playing my home town was an opportunity I wasn’t going to miss, especially since the latter show (the one you’re about to read about) was being held at Stuck On A Name Studios, which is where I/we practice and record too!

Oddly enough I was most excited to see tonight’s openers, as I stumbled across the debut album from Arboricidio (recorded in this very venue, fact fans) by complete chance earlier this year, and have been dying to see it performed live ever since.

Suffice it to say I was not disappointed, as the band’s metallicised Crust/Punk racket – tinged here with potent, d-beat grooves and a touch of blackened belligerence – proved to be the perfect starting point for the evening’s festivities.

The band (and particularly their diminutive but commanding frontwoman) were a collective ball of energy and enthusiasm from start to finish, and I can’t recommend them highly enough.

I’ve seen home-town heroes Underdark live a few times and, to be entirely honest with you, I’ve never been particularly impressed, as they’ve always struck me as the sort of band who say all the right things but whose execution never quite lives up to the hype around them.

Tonight, however, while by no means perfect, went a fair way towards making me reassess the band’s long-term potential, as it was easily the best time I’ve seen them.

Some of this is clearly down to the the addition of a new vocalist, who seems to have given the quintet some extra bite, but they can’t take sole credit for the obvious improvements I observed this evening, as the whole group just seemed a lot more focussed and tightly-knit as a unit.

Granted, there were still a few sloppy transitions and “generic” musical moments here and there, not to mention some slightly mawkish, melodramatic lyrics/vocals, but the overall impression I was left with was of a band finally starting to deliver some real substance instead of just copying someone else’s style. One to keep an eye on.

One thing that’s surprised me recently, when reading a few different reviews of the new Dawn Ray’d album, is seeing certain people criticising the band for lacking anger/intensity.

And while different people will always hear different things, and interpret those things differently, I honestly can’t fathom how anyone can fail to hear the righteous fury in Simon Barr’s vehement vocals, or feel the pure intensity of Matthew Broadly’s punishing percussion.

Perhaps it’s the polemical nature of the band’s politics, which tonight translated from page to stage in visceral, volatile fashion, which prevents some people from connecting with, and appreciating, the emotional weight and commitment behind their music, but, for my part at least, I’ve never felt that it was a requirement that I (or anyone) agree 100% with their message in order to listen to them.

Tonight’s show only reaffirmed this belief, as while the band still declare themselves to be “proud anarchists, anti-fascist, and pro-union”, they spent very little time preaching to their audience (and what little they did say was more about extolling the virtues of community and collective action), preferring instead to let the music speak for itself.

And speak it did, loudly and proudly, with the trio mostly using the event to showcase material from their just-released new album, with an intoxicatingly anthemic rendition of “To All! To All! To All!” proving to be the highlight of the evening.

One thing that really struck me during tonight’s show, which I’ve never really noticed before now, is how early Ulver-esque some of the band’s riffs are, with the guitar work of Fabian Devlin crackling with a primal, organic energy which draws in equal amounts from the traditions of Black Metal, Folk, and protest music down the ages.

It really made me see/hear the band in a new light and, although their set was perhaps a little too short for my liking, there wasn’t a moment where I wasn’t absolutely riveted by their performance.