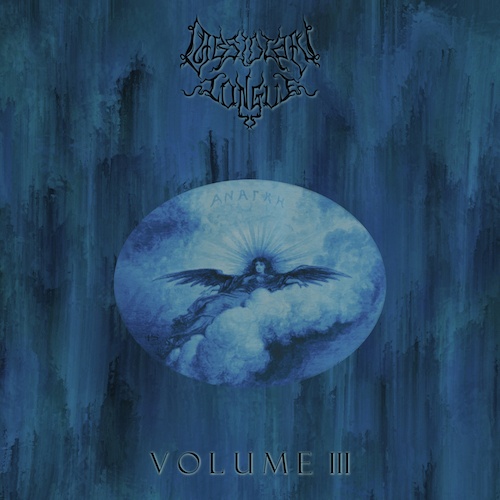 It has been a long wait, six years now since Obsidian Tongue‘s wonderful second album, A Nest of Ravens in the Throat of Time, albeit with some great work in evidence through their track “The Lakeside Redemption” on a four-way split in 2015 (Northeastern Hymns). In that time guitarist/vocalist Brendan Hayter has joined forces with a new drummer, the formidable Ray Capizzo of Falls of Rauros (and a live member of Panopticon), and together — at last — they have completed a third full-length, simply entitled Volume III.

Today it’s our great pleasure not only to assist in announcing this Maine band’s new album — which will be released by Bindrune Recordings on January 31, 2020 — but also to premiere a stunning song from the record named “Return to the Fields of Violet“. 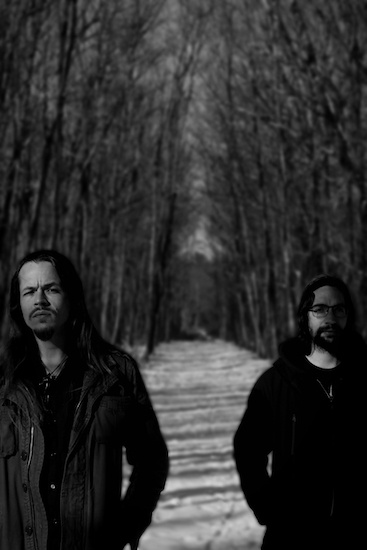 One of the most striking take-aways from listening to Obsidian Tongue‘s past work is the remarkable variation in the music, and the ways in which Brendan Hayter managed to successfully interweave so many strands of darkness and light, of differing genre sources, into such rich, cohesive, and memorable tapestries of sound. And here, he and new drummer Ray Capizzo have done it again.

“Return to the Fields of Violet” is emotionally intense music, but the levels of intensity and the emotional resonance of the music are in almost constant flux, yet united by the core melodies, which linger. Heavy, gloomy chords, riotously flickering leads, pummeling drums, and scorching shrieks push the intensity hard from the start. Hayter seamlessly moves his voice to soaring song as the drums begin blazing and the riffing buzzes with violence, and thereby introduces a different kind of passion into the music.

The song’s dimensions continue to change, with the advent of mystical ringing notes backed by light strumming and serrated-edge gasping expressions — which again morph seamlessly into song. The storm-burst of thunderous double-bass and wind-driven gales of incendiary riffing and scorching shrieks almost comes as a shock, and so does the sudden transformation of the sound into a luxurious panorama, sweeping in its scope and soaring in its emotional lift. Hayter’s voice takes wing toward the clouds as the drumming pounds your own pulse, and it makes for a heart-swelling crescendo.

That wave crests, and the sound falls away again as the drumming becomes more measured and isolated notes ring out, but the true climax comes with the intense pulse of the guitar and the reappearance of those throat-lacerating shrieks. The music swirls and seems to glow with extravagant spiraling light above its turbocharged percussive drive — and that extravagant union makes for a genuinely inspiring, heart-in-your-throat finale.

Bindrune plans to release Volume III on CD and LP. With a release date still several months ahead, pre-orders haven’t yet begun, but keep your eyes on the links below to learn when that happens. This is an album you won’t want to miss.

6 Responses to “AN NCS PREMIERE: OBSIDIAN TONGUE — “RETURN TO THE FIELDS OF VIOLET””