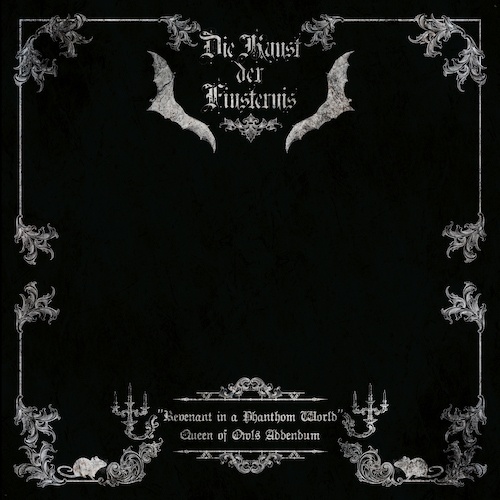 “Die Kunst der Finsternis plays Horror Metal exclusively.” So says this Sweden-based band, the macabre solo project of Deacon D. (also a fixture in Hetroertzen), and truer words were never spoken. There is equal truth in the title of the band’s third album, Revenant in a Phantom World (Queen of Owls Addendum), because the music does indeed sound like the expressions of one who has known death and returned from its domain to haunt the living, or to feed upon their blood. It also captures the transformation that listeners risk by becoming immersed in its deeply chilling sensations.

It’s the kind of album that kindles the imagination, in very discomfiting ways, and perhaps is best described by the visions it spawns rather than by a dissection of its ingredients, which include bits and pieces of black metal, death metal, gothic melody, and a cavalcade of demonic voices, all interwoven through the experimental and expressionistic imaginings of its creator. 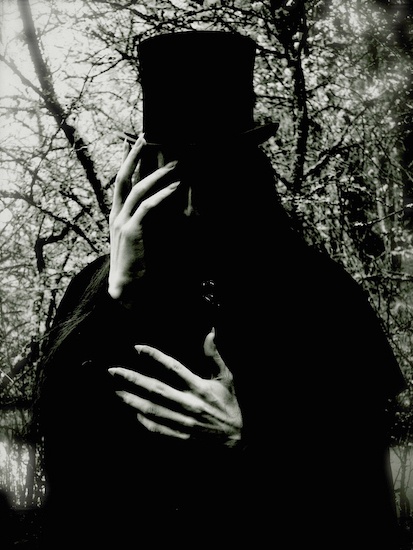 The subtitle in name of this third album refers to the preceding full-length, Queen of Owls. This new one will be released (fittingly) on October 31st by both Lamech Records and Amor Fati Productions. It is a sequence of nightmarish hallucinations, twisted and ever-twisting, like a musical labyrinth of horrors, each turn presenting some ghastly new apparition, the crepuscular gloom revealing hungering fangs and red eyes, or the beckoning of pale slender fingers with translucent skin.

The rhythm guitar crackles with distortion, the leads shine with quivering paranormal light, the drumming rarely holds fast for very long to any particular cadence or pattern, and the voices — what an array of sounds those are, ranging from exultant cries to fanged, strangled howls, deep wordless sounds akin to monastic throat-singing, extravagant shrieks, ghostly wails, horrid growls, and sinister cackling.

You’ll also experience extravagant somersaulting drums enmeshed with slow, bereaved organ chords, sounding like the twisted meditations of the Phantom of the Opera, as well as the alabaster purity of gothic keyboard melodies, the ritualistic tumble of tom drums, the tortured sounds of a strangling throat, and the perversions of carving guitars leaning into their work on defenseless flesh.

The deeper into the album you go, the more unsettling its effects become. It’s as if we’ve been led progressively deeper into dank catacombs, slowly freezing to death without realizing it, while simultaneously experiencing the terrors of being the only living thing in the habitation of the undead, soon to join them, soon to nourish their moaning exhalations and feeding their unhinged frolics.

Although it’s one of the most persistently creepy albums I’ve ever heard, I should mention that Deacon D. does sprinkle head-hooking riffs among these tracks, like the appearance of torches in the catacomb walls to light the way down — though they’re soon blown out by passing phantasms or doused by blood trickling from scaffolds lost in the blackness overhead.

Steel yourself and press play below for a full stream of these ingeniously crafted nightmares, and be sure to set aside additional time to play it again on Samhain, so the spirits that then come into our world will have some music to hear that they will recognize. The album is available for pre-order now.