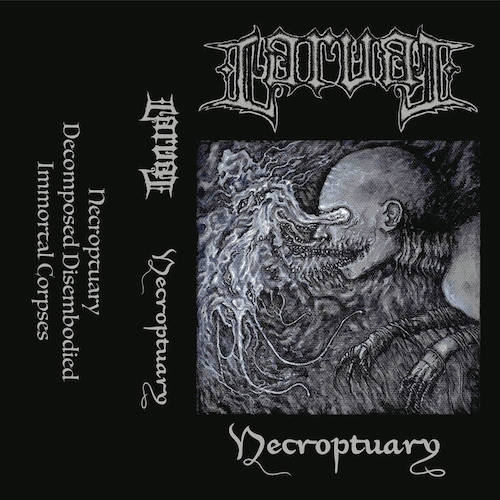 In the spring of this year the Bay Area band Larvae, with a revised line-up, returned after a five-year interlude following the release of their debut album (Grave Descent) with a new EP named Necroptuary. The EP consisted of three tracks that were thematically interlinked, seeming to function as a commentary on the sacrifice and scars, the pain and bodily corruption, that characterize human existence, and of the crossing over from chaos to another plane of existence that comes with death.

Today we’re presenting an evocative lyric video for the new EP’s closing track, “Immortal Corpses“. To introduce it, and to aid in understanding it, we’ll begin with a statement by the band’s founder, vocalist/guitarist Brad Kobylczak (who is joined in Larvae by lead guitarist Dara Santhai, bassist Wyatt Culbertson, and drummer Eric Evert, all of whom shine as integral parts of the music on this EP): 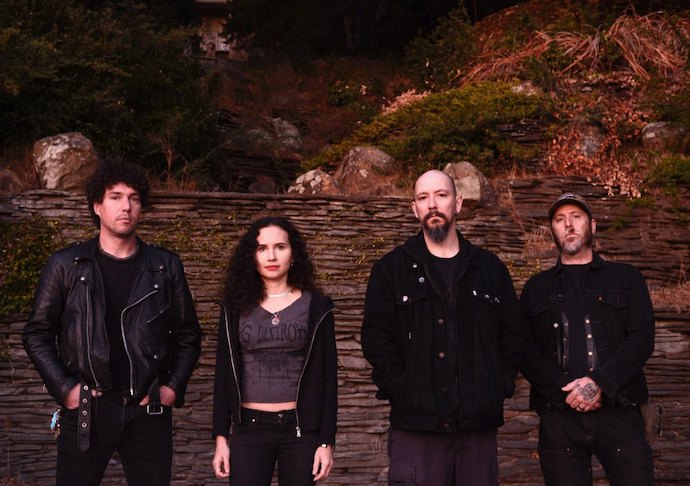 “‘Immortal Corpses’ is a story about our human bodies being temporary hosts for our consciousness. We live in these doomed vessels for now but our consciousness may live infinitely after they expire. It’s suggesting death is not the end of our existence and that we drag around our own corpses on a daily basis to ultimately leave It behind.

“As a band, our musical influences span across doom, death, thrash and black metal. We’ve each been in crust and hardcore bands as well. In a cauldron dripping with horror sci-fi and metal riffs we use our past experiences to paint a textured story drawn from negative emotions.

“Up to this point Larvae’s lyrics have always dealt with real world issues but mainly life and death challenges, loss and depression. It took a lot out of me to focus on personal conflicts because it would send things spiraling out of control for me for weeks or months. But, I’d have lyrics I could stand behind and it was ultimately cathartic. ‘Immortal Corpses’ is the first of our songs that deals with death as part of living as well as transcending into life after death from a species of wandering hopeless zombies.” 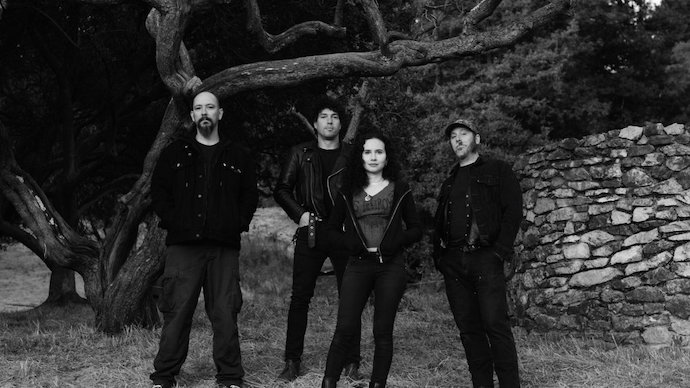 “Immortal Corpses” clearly grapples with serious, timeless subjects, as old as human sentience itself. In channeling those subjects into sound, Larvae interweave a range of genre styles, and a changing array of emotional sensations as well. The music is ravaging and violent, frenzied and ferocious, brutish and crushing. And it’s also doomed and haunting.

In the song’s opening movements the band shift back and forth, between blasting drumwork coupled with unhinged, writhing riffery and massive, lumbering, heavily distorted chugging laced with squealing strings and paired with skull-fracturing drum blows. The prominent bass alternately bubbles like a giant heated cauldron and ominously thunders. The vocals are a methodical frightening roar, rising to flesh-flensing howls.

The music is a vicious, mauling, mind-mangling experience, but eventually the pace slows and the bass line becomes more moody even as the riffing transmits the sounds of seething pain. This becomes the setting for a striking solo that seems both grief-stricken and psychedelic. What follows is a colossal crescendo of crushing rhythms and scything fretwork, super-heated by another solo that’s more extravagant than the first… followed by a spectral, mystical finale that seems to capture the transition to a new plane of existence.

Necroptuary is available now (on cassette tape and digitally) at Bandcamp. Larvae are currently starting to write new material for a second full-length and are planning tours throughout the West Coast and beyond.