In mid-September we took the rare step (for us) of sharing the announcement of a new album by the German black metal band Krater even though we didn’t yet have any song streams to present, because their past releases have been so damned good. The opportunity to put Misanthropic-Art‘s creepy creation for the album’s cover at the top of our page was an added inducement. But now we have not one but two songs from the album available to your ears, one of which we’re premiering today.

The new full-length is named Venenare, and it will be released on November 15th by Eisenwald. A 50-minute work, it’s divided into nine tracks. In the flow of the album, the song that’s being revealed today, “Zwischen den Worten” (Between the Words), arrives third in the running order, and it’s immediately followed by “Stellar Sparks“, the other song from the album that’s now streaming (it premiered three weeks ago at DECIBEL). Listening to both of them back-to-back is highly recommended. 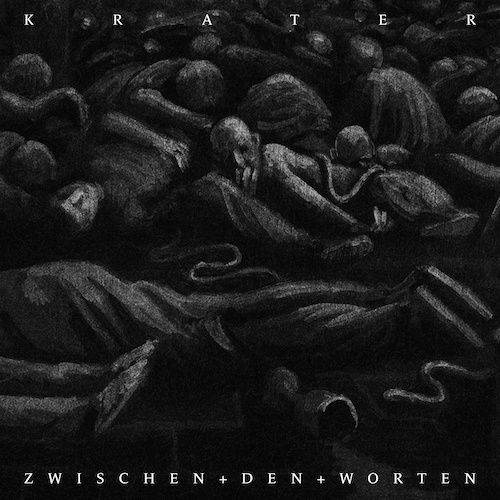 Krater present “Zwischen den Worten” in momentous fashion, both building tension and hinting at the grand scale and sweeping impact of the music. The slow, dense cascades of melody, which wash over prominent, meandering bass tones and mind-puncturing drum patterns, resonate with a conjunction of haunting mystery and painful wretchedness. Though emotionally penetrating, there is a gloomy solemnity in the sound, made even more reverent in its dark moods by the chant-like cadence of the harsh, frightening vocals.

The guitar instrumental in the song’s mid-section rings like a clarion call — slow, soulful, sorcerous, and stylistically apart from the conventions of black and death metal. From there the intensity of the song swells, the vocals leading the way with increasingly extravagant passion, and the mounting waves of melody accented by much more fiery solos than the one which preceded them. The sound is both panoramic and laced with pain and fear. 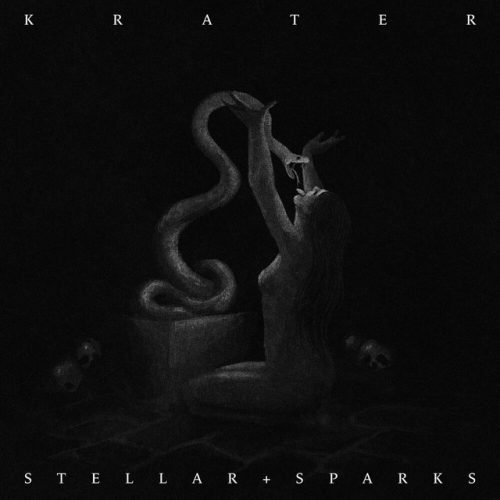 The sense of being picked up and swept away (or of being immersed in an other-dimensional vortex) carries through into “Stellar Sparks“, but that song is immediately more intense, propelled by hurtling rhythms and livid cries. The riffing is more frenzied and jabbing, the low-frequency currents in the music are more crushing, the leads flicker like nerves boiled into delirium, and the drummer discharges blast-beat fusillades.

To be sure, there is still a sense of stateliness and grim majesty in the song (the vocals eventually break into reverent song), a feeling of occult mystery, and an atmosphere that becomes dominant near the end of both frightening power and terrible calamity.

(The band commented about this song at the time of its premiere: ““[The song] follows the steps of a person, carrying the ashes of a dead one to the top of a mountain, to spread it there. Every step up the mountain is a step back to the stars. Bitterness is feeding the will to keep striving forward, with our inner divinity and the knowledge that we all are meaningless and worthless.”)

These two songs are powerful introductions to a stunning album, and convincing signs of Krater‘s continuing evolution as genre-hyribidizing songwriters, and of their capacity, which is reaching a zenith on this album, to gracefully interweave chilling melodies into their fearsome music in ways that haunt the mind.