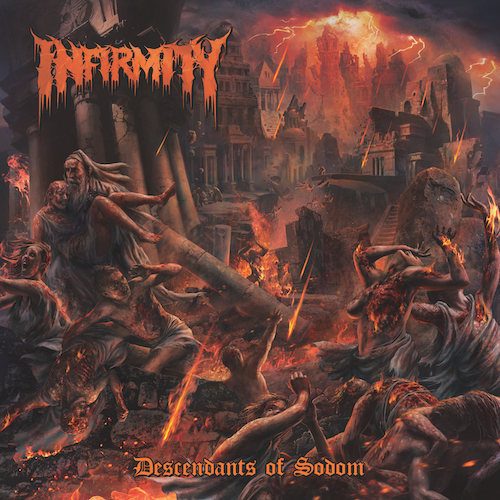 At this site we make strenuous and steadfast efforts to search for appealing new sounds from bands whose names aren’t the ones everyone already knows and who tend to dominate attention at most other locations. The daily flood of new metal is so torrential that the search for unheralded underground gems can sometimes feel exhausting. But all it takes to recharge the batteries is to come across the kind of megawatt thrill delivered by an album like Descendants Of Sodom.

This debut album by the Los Angeles death metal band Infirmity is a very big and very welcome surprise, and we’re delighted to present a full stream of it today, on the verge of its November 9th release by Lost Apparitions Records. 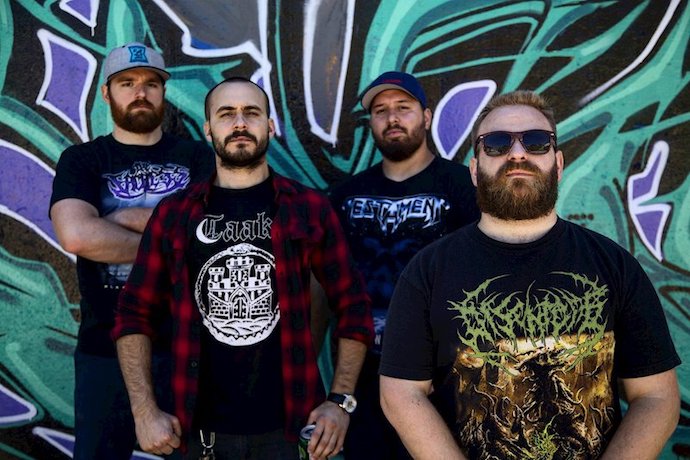 The seven tracks on Descendants Of Sodom are beautifully composed, expertly performed, and have been produced and mixed with welcome clarity and bone-breaking power. The songs dynamically blend together divergent sections, showing off impressive, razor-sharp technicality and intriguing progressive permutations, as well as delivering punishing but addictive grooves, electrifying Slayer-esque rampages, and bursts of blast-fueled evisceration with riffs that cut like whirring circle saws.

Infirmity possess a stellar rhythm section (bassist Brent Gore and drummer extraordinaire Zach Ramirez) who are impressively inventive, technically adept at turning on a dime, and a genuine thrill to hear. Without being a show-off at all, Ramirez still regularly steals the show, and the fine balance in the mix lets us notice that Gore is doing a hell of a lot more than keeping time; the band made the smart choice to give him bass solos that, albeit brief, always change the moods of the songs, adding to their already striking dynamism.

The band continually shift gears, regularly making room for irresistibly headbangable rhythms, with a penchant for episodes of jackhammering and pile-driving that have thunderous force. But the talents of guitarists Kevin Lowery and Daniel Shultz go well beyond a knack for cooking up red meat for hungry headbangers. They discharge hybridized riffs that dart and swarm, scythe and seethe, flicker and fly.

Moreover, these songs are threaded with emotionally evocative dark melodies that channel a range of sensations — ominous and frenzied, brooding and melancholy, serpentine and mysterious — which succeed in giving each song a character of its own.

The guitar soloing, generously provided, is also fluid, nuanced, and often technically jaw-dropping, but never feels randomly inserted, just to have a showy guitar solo in order to check off boxes on a formula. They really mesh with the rest of the music. Sure, they have the capacity to get your heart racing, but they’re carefully attuned to what else is happening in each particular song.

Apart from their fretwork, Lowery and Shultz also combine on the vocal front, creating a tandem of bestial blackened snarls and shrieks, and guttural bellows and roars. They’re good at what they do, but they don’t over-do it. The vocals in the songs don’t take up a high-percentage of the run-times, and that was another smart move, because the song-writing and the instrumental performances are good enough to merit undivided attention. 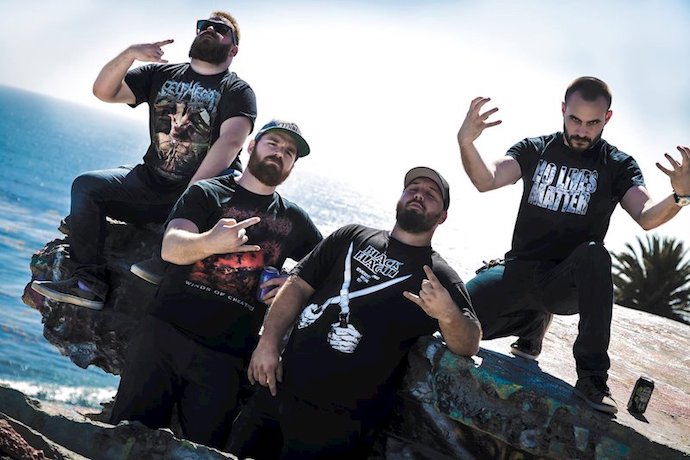 All the songs hold their own quite well, like a collection of strong singles, making the album one that’s shuffle-friendly. But some are more immediately addictive than others. “Darkness Reigns Supreme” is one of those. Its highly infectious pulsating riff, the terrific solos, and its pneumatic, neck-wrecking grooves, accented by sonic flares of anthemic grandeur, make it a standout.

The terrific album closer “Unholy Deception” (which might be the record’s high point) is also in the running for the “most infectious” award. It begins with creepy ritualistic chanting, and riffing that gives the song the feel of cruel, grinding mutilation, but it’s also home to highly compulsive pounding grooves, flurries of fast-twitch fretwork, and a multitude of solos that soar, dive-bomb, moan, shriek like poltergeists, and swirl so gloriously that they will cause most metalheads to lift their invisible oranges to the heavens.

And on top of all these other laudable qualities, the album is just about the perfect length for what these guys are doing — long enough to be satisfying but not so long that it wears out its welcome. 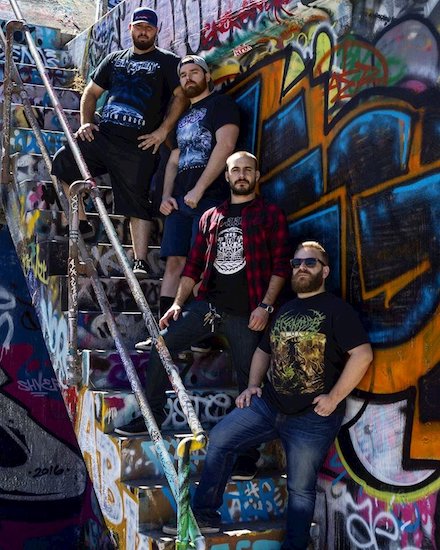 Yes indeed, Descendants of Sodom is a very big and very welcome surprise. Credit for the recording, mixing, and mastering of the album goes to John Haddad at Trench Studios in Corona, California. The eye-catching cover art is the work of Daemorph Art.

Check the link below for pre-orders: