Mount Soratte is a limestone mountain ridge roughly 45 km north of Rome. No less an authority than Virgil identified Apollo as its guardian deity, and in another age the mountain was used by ancient Italic and Etruscan peoples as a sacred place for for the worship of Soranus and then Apollo Soranus. The worshippers were firewalkers and were referred to as Hirpi Sorani (the “wolves of Soranus”). And it is this ancient fire cult that is the subject of the debut album of the formidable Italian black metal cult Comando Praetorio.

The name of the album is Ignee Sacertà Ctonie, which itself refers to fire and to the mysticism of the underworld, whose gods were also linked to the rituals on Mount Soratte. The music is in keeping with the album’s thematic inspirations, creating an array of dramatic sensations that are mystical and profound, ominous and dire, melancholy and doom-stricken, and — of course — incendiary.

We have already commented about the first strike from the album, a song called “Barbarie della Pietà” that was released in October, and now we present another one of the album’s four substantial tracks, this one named “Pire di Ere Incenerite“, as we approach the December 13 release of the album by ATMF. 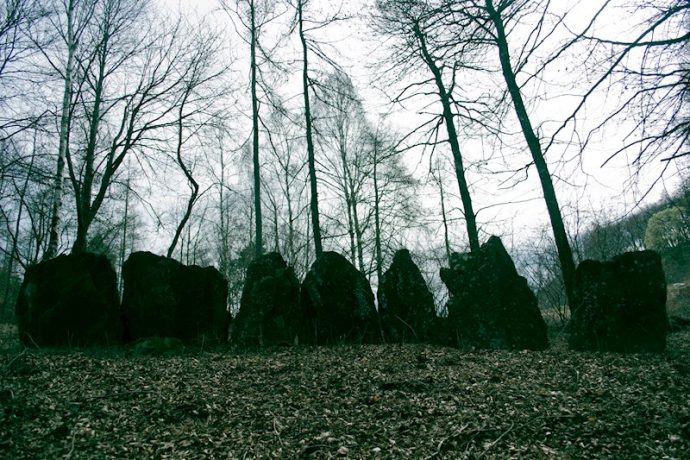 That first-released song powerfully demonstrated Comando Praetorio‘s talent for crafting multi-faceted musical experiences. It harnessed together thrumming low-end power, sweeping cascades of changing melody, swirling arpeggios, ponderous chords, the reverberating savagery of a scalding voice, and reverent yet impassioned singing. The balanced mix gave those big bass tones and gut-punching drum blows ample opportunity to bend your neck to their will, but the music was not only muscular but also otherworldly and thoroughly immersive. “Barbarie della Pietà” was (and still is) heavy and mesmerizing, cloaked in gloom and gleaming with fire-light.

This new song, “Pire di Ere Incenerite“, is yet another dynamic demonstration of the band’s power and prowess. At the outset, the shining leads and scarring riffs make use of eerie, mind-warping dissonance, unfolding over monumental low-end frequencies and titanic booming drums. Stately and strange, that doom-cloaked opening could easily have carried the entire song, but the band chose to accelerate, with the drummer launching variable fusillades and the bassist engaging in vibrant flurries as the guitars generate high, scorching riffs that burn with an anguished fever.

The band continue to vary the pace, slowing to allow the bass to vibrate the spine and the drummer to hook the listeners’ heads, but the riffing remains a searing source of discomfort, as do the rage and frustration vented by the vocalist’s terrifying howls and throat-splitting screams. When the tempo changes again into a more animated cadence, the melodic tone of the riffing begins to seem less despairing and more wistful and longing. And when the momentum slows again, strummed chords beautifully channel a feeling of grief on a grand scale.

That feeling of wondrous though melancholy beauty persists, cascading above a renewed torrent of hammering drums and throbbing bass tones. When the pace slows yet again, the haunting grandeur of the melody continues to unfurl, falling silent only at the end, when a wash of ambient sound creates dreadful visions of a building storm.

Suitably, the band’s remarkable musical achievements have been enriched by the evocative cover art of Timo Ketola. ATMF will release the album on CD and digitally.