(Our old friend Professor D. Grover the XIIIth (ex-The Number of the Blog) returns to NCS with a review of the new album by the Minnesota “castle metal” band Obsequiae, which will be released by 20 Buck Spin this coming Friday, November 22nd.)

Joyous greetings and salutations, friends. Evidently, it’s been four years since Obsequiae graced the metal world with Aria Of Vernal Tombs, an album that came more or less out of nowhere to become my favorite album of that year. Following that, rather than wearing out its welcome, Aria instead settled further into my consciousness, cementing its status as my favorite black metal album ever and seizing a likely spot as one of my ten favorite albums ever.

Friends, given the volume of music I listen to on a weekly/monthly/yearly basis, this is no small thing.

Really, though, even as Aria settled around my brain like a comfortable chair around your butt, I found myself craving more, and so when I discovered that they finally had a follow-up album in the works, my excitement was palpable. (Entertainingly enough, there exists a possibility that I may have offered favors of a sexual nature to Islander in exchange for the procurement of a promo copy of the album, although I will neither confirm not deny such rumors. I can admit, however, that once said promo was acquired, it became the only thing I listened to for at least a week.) 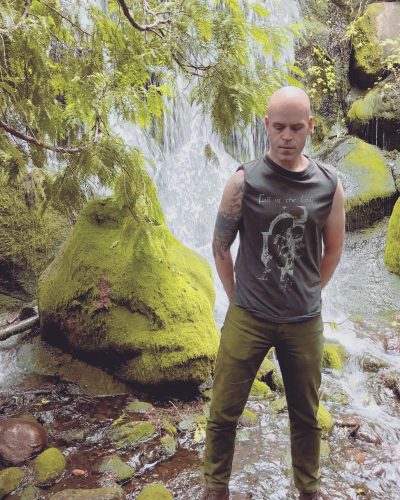 You may be unfamiliar with Obsequiae and their inimitable style; the basic gist is that it’s melodic black metal with a stylistic and structural basis in medieval music. Even though this is a fairly simple description and barely scratches the surface of what Obsequiae do, it’s a good starting point. Pigeonholing them as a black metal band is reasonable, but they don’t really sound like any other black metal band I’ve ever heard. Stylistically, a lot of black metal bands have sort of a cold, thin sound, heavy on the tremolo and light on production value, and Obsequiae instead have this warm, reverb-ish guitar tone with a ton of sustain. There’s not an over-abundance of bass, but it has a distinctive presence and dovetails nicely with the dual guitar melodies. Enterprising multi-instrumentalist and Obsequiae mastermind Tanner Anderson plays all guitars and bass (as well as a few other instruments) and also provides vocals, and while his vocals are sort of hazy and indistinct (consistent with the preceding Obsequiae albums), his voice is an important element of the Obsequiae sound.

In addition, The Palms Of Sorrowed Kings features new drummer Eoghan McCloskey, and his presence is notable. Now, previous drummer Matthew Della Cagna was no slouch, but Palms’ crisper mix gives additional focus to the drums, and McCloskey takes full advantage. Distinctly, his presence is felt on “Asleep In The Bracken”, a track that features so many tempo changes (without repeating them) that it’s hard to keep track of them all.

It’s also important to mention Obsequiae’s third member, medieval harpist Vicente La Camera Mariño. Despite only featuring on five instrumental interlude tracks (an increase from the four interludes on Aria), his addition and contributions to the band cannot be overstated. To be fair, I’m firmly of the belief that “Ay Que Por Muy Gran Fremosura” from Aria is possibly the most beautiful piece of music I have ever heard, and would hope to have it played at my funeral, because four years and innumerable listens later, it still makes my heart catch in my chest. Kindling similar emotions, Mariño’s work on Palms is just as breathtaking.

In comparison to its predecessor, then, how does Palms fare? Listening to my heart, the comparison is a difficult one simply because of how I feel about Aria. Leaving my personal opinion out of a review like this is impossible because my love of Aria colors everything I hear on Palms, and this can be both positive and negative. However, Obsequiae do a fantastic job of recapturing and refining a very unique sound, adding some new wrinkles (clean vocals on the title track and some additional instrumentation on the Mariño-driven outro “In Hoc Anni irculo”, which gives it a very Renaissance Faire feel). In spite of those minor additions, Palms does not deviate from the established Obsequiae sound, for better or for worse; if you were a fan before, you’re probably going to love Palms, and if you weren’t a fan then nothing here is likely to change your mind.

Mind you, I’m not listening to Obsequiae because I want to hear them experiment with their sound a great deal. Seems to me that when your entire sound is unique already, there’s not much of a need to make broad, sweeping changes in a bid to bring in new fans, and it doesn’t seem like Tanner Anderson gives a dry, papery fart about jumping to the mainstream or following trends. Entrenched as The Palms Of Sorrowed Kings may be at the top of my year-end list, however, at this point I can’t necessarily say that it’s going to replace Aria Of Vernal Tombs as my favorite Obsequiae album. Lest you think this to be a slight upon this album, though, I only say this because Aria has a strong edge based solely on years of listening and familiarity; there is no doubt in my mind that The Palms Of Sorrowed Kings is the best album released this year. Four years from now, ask again how it holds up to its predecessor, for the answer may have changed.

A full stream is available now at DECIBEL — here.

4 Responses to “OBSEQUIAE: “THE PALMS OF SORROWED KINGS””