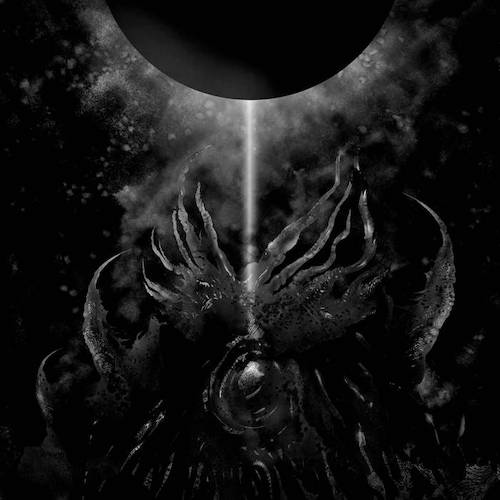 (Today Sentient Ruin Laboratories is releasing the debut album of the multinational black metal entity Decoherence, and to commemorate the occasion we have Andy Synn‘s laudatory review of the record.)

It still never fails to surprise me, although I probably should have learned by now, how conservative and parochial some Black Metal fans can be.

Don’t get me wrong, I’m a firm believer that every genre (not just Black Metal) has certain key features, certain boundaries, which define them, but it’s not hard at all to find bands pushing and exploring and expanding these boundaries in a way which still maintains the fundamental essence of the style.

That’s not enough for some people though, especially in Black Metal, where the issue of what is “true” and what is “false” often gets simplified down to “whatever I happen to like is real Black Metal, and whatever I don’t like isn’t”.

Still, even the most obsessive and obdurate of refuseniks will have a hard time denying that Ekpyrosis is one of the best Black Metal albums of the year.

Equal parts dense, droning dissonance, pneumatic, pulse-pounding percussion, and cold, claustrophobic atmosphere, these five songs blend together elements and aspects of several different styles – howling guitars and intense industrial rhythms butting up against asphyxiating ambient soundscapes and eerie electronic vibrations – in what can only be described as a titanic display of analog aggression and digital desolation.

Of course, this isn’t an entirely unique phenomenon, as the band themselves namecheck the works of Blut Aus Nord and Darkspace as key influences and inspirations, but this in itself only supports my initial statement that, as unorthodox and otherworldly as Ekpyrosis can be at times, there’s no doubt in my mind at all that it remains, at its cold, unbeating heart, a Black Metal album from start to finish.

Indeed, from the moment that opener “Rearrangement Collisions” lurches into life until the final, dreamlike dissolution of oppressive closer “Dimensionless Angular Momentum”, you’ll find yourself assailed by a tangled torrent of scathing ferocity and scything velocity, intermixed and intermingled with doom-like dirges and hypnotic pseudo-melodies, all surrounded by an unnerving, quasi-ritualistic aura reminiscent of Schammasch at their most abstract and alien, and driven by a seething, discordant energy which recalls the very best of the Icelandic Black Metal scene.

It’s an unrelentingly dark album, make no mistake about it. But even though every single track is painted exclusively in shades of only the blackest black (with perhaps just a touch of grey around the very edges) the constant, slow-motion shapeshifting and mesmerising non-Newtonian fluidity within every song, minute to minute and moment to moment, keeps you right on the edge of your seat and staring right into the abyss for the entirety of the album’s forty-one minutes and forty-one seconds.