Two things: First, for those of you who make it a point to come here on Sundays for a SHADES OF BLACK feature, I do plan to have one ready a bit later, though I’ve had a devil of a time trying to cut it down to a manageable size. I still have quite a lot to write too, and I’m planning to get together with some cronies to watch the Seahawks football game this morning, so things could go sideways.

Second, I waded through an extravagant number of recently released songs yesterday, planning on a SEEN AND HEARD round-up. And that’s really what this is, but the different post title I picked hints at the reason why I decided to combine the music of these five bands — because all the music, in different ways, struck me as exotic. And I do have to emphasize that they struck me that way because I’m listening with Western, and in particular, homegrown American, ears.

The first selection is a cover of a song by Kaláka, an old Hungarian folk band who turned 50 this year. The mastermind of Thy Catafalque, Tamás Kátai, explained that this band “have been one of my main inspirations since my childhood and this song is particularly close to me.” The song, “Embersólyom“, is presented through a beautiful video filmed in the Bükk Mountains of northern Hungary. 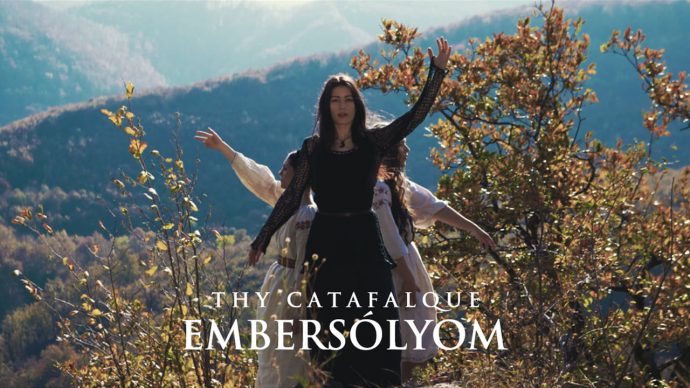 Martina Veronika Horváth (ex-Niburta, SallyAnne, Nulah) is the star of this song. The purity and control of her voice are inspiring, The sounds of a flute and of the oud (performed by Vajk Kobza) are also important elements of the song’s appeal, which is both mesmerizing and body-moving, both mystical and jolting. As vibrant as the song is, there is also tension in the music, and maybe even something ominous, and Tamás Kátai makes it very heavy indeed before it ends.

“Embersólyom” is the second track revealed so far from Thy Catafalque‘s marvelous new album Naiv, which will be released by Season of Mist on January 24th. The cover art was created by Irene Saíz Guerrero. 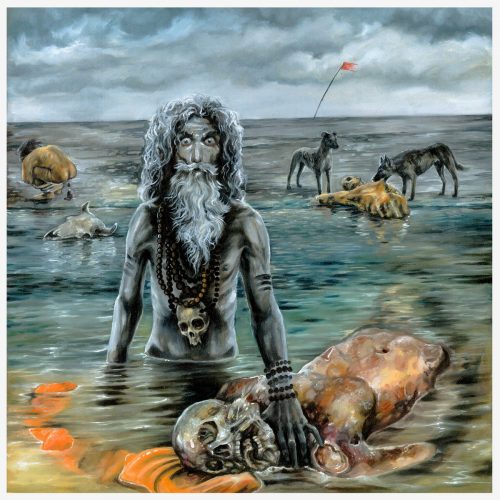 This next song, “(Un​)​Clean“, was released by the great Czech band Cult of Fire as a stand-alone vinyl and digital single, but it will also appear on a double album named Moksha / Nirvana that will be released in March 2020.

From all surface indications, including the “Vedic metal” tag on the Bandcamp page for the song, one might expect it to include melodies connected with traditions of the Indian subcontinent. I don’t hear that in a pronounced way, though I’m far from an expert in such musical traditions. What I do hear, and what makes such a striking impact, is the absolutely glorious fieriness of the flashing, swirling, soaring melodies. That feeling is really right there from the beginning, but it becomes particularly transcendent at the 2:30 mark, following a short bridge.

Cult of Fire do reduce the heat by slowing the drum rhythm a bit, but eventually go full-bore again, and the music again becomes panoramic. The clattering drum rhythm at this point is itself exotic, in keeping with the extravagant, heart-swelling sorcery of the rest of the music.

(Thanks to Miloš for making me aware of this song.) 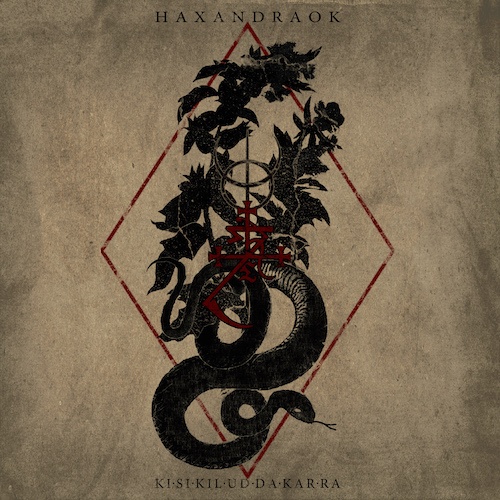 The name of the next song is “The Temptress of UD DA KAR RA“. It is taken from the album KI SI KIL UD DA KAR RA from the part-Greek, part-Polish band Haxandraok, which is set for release on the 17th of December (CD, vinyl, digital) by Ván Records. The label explains: “Musically enchanted by the numinous traditions of the East, the classical connoisseurs of the West and the tribal reverence across the continents, Haxandraok emanate a witching lyricism fermented in atavistic Mysticism.”

That comes as no great surprise, given that the men behind Haxandraok are Saevus H. Aldra-Al-Melekh (Devathorn, Acherontas, Shibalba) (vocals, guitars, and incantations) and Marcello (Inferno, Besatt) (drums, percussion. tribal reverence), with assistance from bassist Arkhus A.

This is an absolutely transfixing song, presented through a lyric video that reveals its occult inspirations. The exotic acoustic guitar intro lays the foundation for an equally exotic Middle Eastern melody and the folk-like dance of the drum rhythms (though you’ll get a dose of blasting, plus other enormously vibrant and frequently changing rhythms). The music swirls and whirls, and glows with inflamed ebullience. The riffing also becomes a jolting headbang-trigger. The vocals are every bit as explosively impassioned as the music, and the combination of the two is contagiously ecstatic.

(I’m indebted to eiterorm for telling me about this song, and for guessing quite accurately that I would fall for it.) 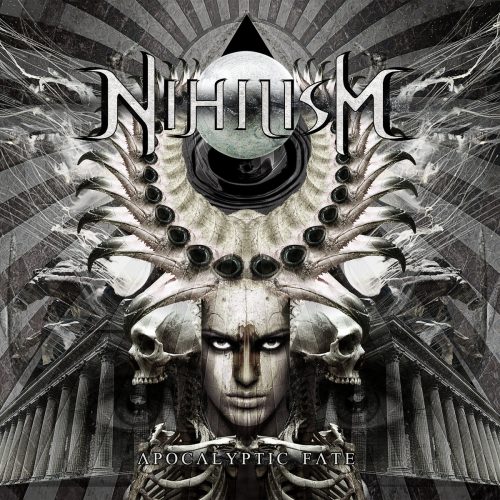 Apocalyptic Fate is the second album by the French death metal band Nihilism, and as far as I can tell, we haven’t written about them before. The album was released by Great Dane Records just two days ago, and I confess that I haven’t spent enough time with it to feel comfortable providing even a truncated review. Instead, I’ve chosen one song from the album to focus on, and its name is “Akatheeb“.

This song features a guest appearance by Rajeh James Khazaal, bassist/vocalist of the Dubai-based death/thrash band Nervecell (who I hope will be releasing something new of their own before too much longer).​ Compared to the preceding songs in this collection, “Akatheeb” is downright explosive, a furious assault of obliterating drumwork, riotous riffing, and harrowing vocal aggression. It’s a huge, bone-breaking adrenaline trigger, but even when it’s in full-on devastation mode you can hear Middle Eastern melodic accents.

And those accents become less subtle and more overt in the song’s mid-section, when the barrage abates to make way for an extended guitar solo that’s just fucking magical. Of course, the band shift into high gear again, racing and ravaging in breathtaking fashion.

I’ll give you a suggestion:  Let the stream below keep going after “Akatheeb” concludes (and at some point go back and listen to the first two tracks), because the album as a whole is damned strong from beginning to end, a masterful mix of pulse-pounding, technically impressive death metal brutality and emotionally intense, deeply penetrating melodies. 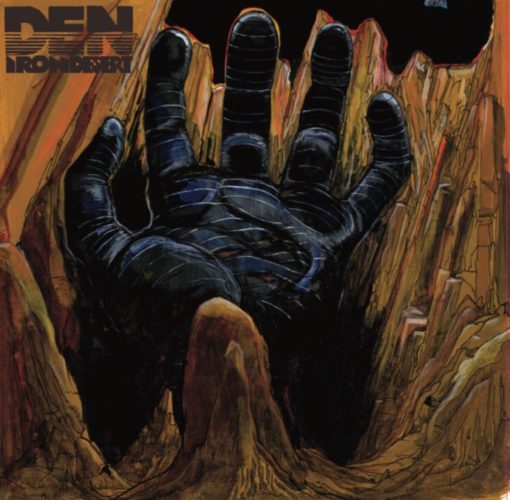 As was true of the Nihilism album that produced the preceding track, the new album by Chicago-baed Den — Iron Desert — was released just two days ago, in this case by Corpse Flower Records. And like that last album, I haven’t spent enough time with this one to muster a comprehensive review, even though I did receive a promo almost two months ago. Not for the first time, I wish I had more time. Once again, I’m mainly concentrating on a single track, which happens to be the one that opens the album.

Iron Desert has gotten a fair amount of well-deserved attention, with amalgamated genre references that include noise rock, sludge, doom, and psyche. And those are all fair references, but am I the only one who detects Arabian melodies in “Pyrite” (and other tracks)? Well, maybe others have noticed that and I just haven’t seen it. But the musical influence pushed me to google the reference to an “iron desert” in the album’s title, and I discovered this from The Font of All Human Knowledge:

“Ad-Dahna Desert is the central division of the Arabian Desert…. Its length is more than 1,000 km (620 mi) siding…. Al-Dahna Desert is therefore the string that connects the great deserts of Saudi Arabia…. Al-Dahna desert is formed of high sand dunes spreading horizontally which are called veins, mostly red in color since it contains Iron Oxides.”

This can’t be a coincidence, can it?

Regardless, “Pyrite” is a wonderful song — fantastically demolishing, with fantastically throat-scarring vocals, brutally body-mauling riffs that heave and moan, and skeletally dismantling drumwork. It’s as heavy as a sucking chest wound, and the hornet-swarm leads are crazier than a shit-house rat, but there is indeed an exotic aura that seeps through the music like a psychoactive drug in the bloodstream.