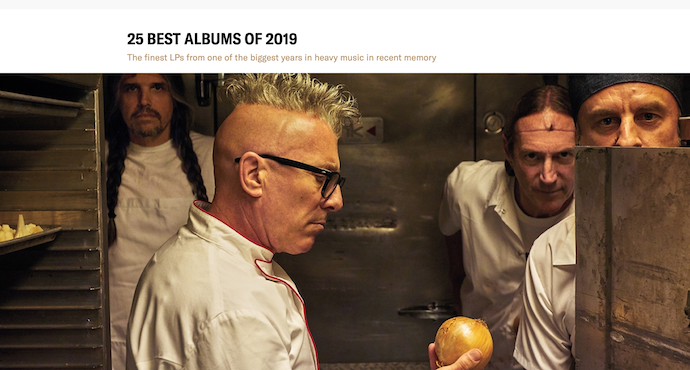 Of course, as soon as you see the words “popular culture” you know there’s not going to be too much attention devoted to the kind of music we cover at NCS. But it’s still amusing, and sometimes even edifying, to get a glimpse of what the above-ground world is seeing acclaimed as metal’s best releases.

Yesterday (or maybe the day before) Revolver magazine published their list of “The 25 Best Albums of 2019” on-line (a reduction from 30 in 2018). Revolver claims that “millions of passionate consumers” visit their website and view their videos across desktop and mobile; that the print edition is the “biggest hard-rock and metal magazine in North America,” with a subscriber base that’s three times larger than the “next biggest U.S. metal print publication”; and that they have a “highly engaged social following with over 1B impressions per month across Facebook, Instagram and Twitter.”

If you happen to be unfamiliar with Revolver, you’ll notice from one of those quotations that they cover hard rock as well as metal, which will be equally evident from a perusal of this new list. And don’t go into it expecting to have your eyes opened to some new underground gem you haven’t heard of. And try not to groan too loudly when you come to Revolver’s picks for the top two albums of the year (hint: there are plenty of other groaners on the list). On the other hand, you will also see Blood Incantation, Venom Prison, Rammstein, and Gatecreeper on the list, and probably some others that will bring some good memories.

22. SeeYouSpaceCowboy – The Correlation Between Entrance and Exit Wounds

20. Ithaca – The Language of Injury

2. Slipknot — We Are Not Your Kind