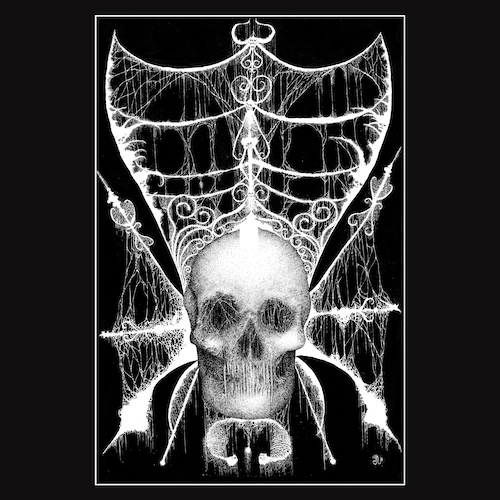 Blooming Carrions is a beautifully chosen name for this Finnish band whose new EP we’re premiering today, as is the EP’s title — Sisters In Blooming Flesh. On the one hand, the music is a stunning display of blackened death metal obliteration and mind-abrading sonic toxicity, capable of completely suffusing the senses with horrifying sensations of sadistic violence, pestilence, rot, and the extinction of hope. On the other hand, within such terrifying encounters the music also seems to revel and to bloom, to reveal the chilling and hallucinatory gleam of rapture in the embrace of death and decay.

Iron Bonehead Productions has set November 28th as the international release date for this new EP, which adds to (and builds upon) a Blooming Carrions discography that includes two preceding demos, 2017’s Sparkling Rotten Dreams and 2018’s Necrosis Twilight (both of them also released by Iron Bonehead). 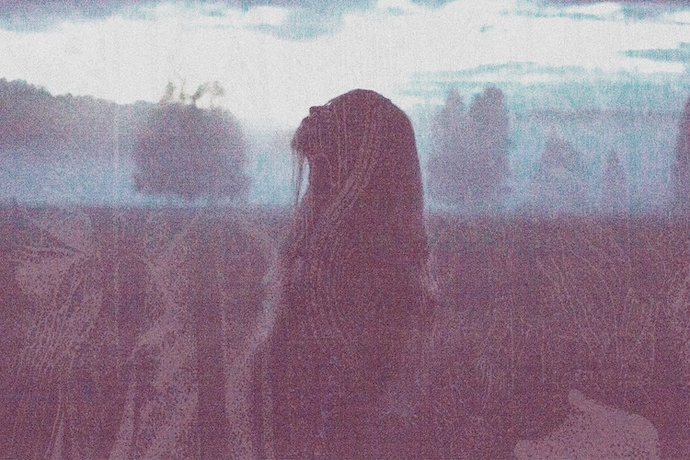 Blooming Carrions has been the solo work of EvM, who has also played a role in the Finish black metal band Ruho, who themselves released a new album just yesterday. But on this new EP he is joined by a second member, bassist PkE.

The new EP does indeed build upon the band’s two previous releases, and exceeds them in the breadth of the experiences provided by the music — which manages the difficult feat of creating a sense of wonder in the midst of horrors.

In the title track, Blooming Carrions shock the senses with an immediate eruption of thundering, somersaulting, and stomping drums, booming bass notes, and a storm of roiling, grotesquely distorted riffing with a queasy, diseased feeling that surrounds and suffuses the listener, like being drowned in a flood of sewage. EvM’s cavernous echoing roars and prolonged, unhinged howls add to the music’s terrifying impact — and yet the eerie, swirling and spiraling leads sound almost gloriously joyful, even though enveloped by such suffocating and suppurating sounds.

The guitar bitterly seethes as the accompaniment to horrid pronouncements in the song’s mid-section, creating a cold and cruel yet feverish atmosphere. When the drums return in full force, that feverish feeling becomes both increasingly delirious and increasingly desolating, and the boiling leads and flaring chords near the end create an atmosphere of fierce grandeur, providing another dimension of experience to this pan-dimensional pandemonium.

True to its name, “Enchantment of Slaughtering” begins immediately with a slaughtering riot of sound — fast, frenetic, and ferocious. High-speed drum blasting and crazed bass-work anchor torrential, mind-scarring riffing and ghastly roars. The rhythm section periodically drops into a more subdued cadence, allowing EvM to use his toxicity-toned guitar as the generator of degradation and despair. Yet, to return again to the song title, there is a feeling of wild extravagance and glorious enchantment that comes through, capped by a thrilling, trilling lead near the end that succeeds in burrowing into the head more and more deeply as it cycles through sensations of yearning and grief.

Whereas the first two tracks began at a torrid and tumultuous pace, the last of the them, “Lehto“, is introduced by stately yet bizarre tones, something like the reveries of a mangled cathedral organ. It’s a mercurial and mystifying experience, but functions as the overture to what becomes a crushing, brutally pulverizing stomp, thoroughly oppressive and doomed in its mood, even though segmented by eruptions of violence. Eventually, the drums launch into a full-bore gallop and the riffing becomes a writhing whirlwind of nuclear fire, engulfing the listener in a scathing display of unchained savagery.

As on the preceding tracks, things change in the middle of this one. The rhythm section again fall silent and the riffing becomes more bleak and beleaguered in its feeling, a feeling that carries through even when the rhythm section return. The whirring chords rise and fall like creeping and surging plague vectors scouring broken landscapes of weeping life, giving the music a nightmarish atmosphere. At the end, the music becomes more savage and sadistic, and more pulse-pounding, yet EvM’s leads again provide reminders of the wondrous unearthly spectacles that tend to surface in the mind’s eye within Blooming Carrions‘ obliterating demonstrations.

Iron Bonehead will release Sisters In Blooming Flesh on 12″MLP and MCD formats. As usual, there are no pre-order options, so check these locations on November 28th for info on how to pick up a copy: