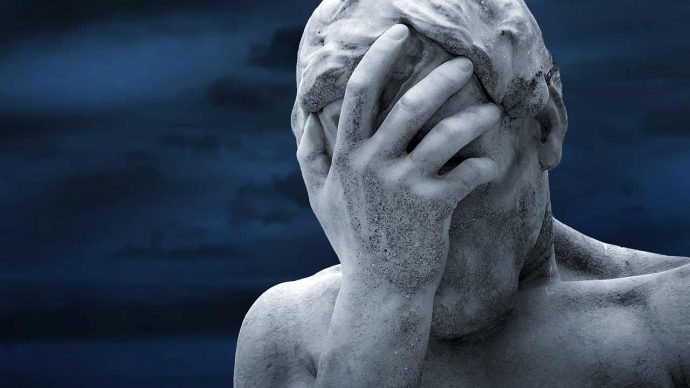 (We do not publish a single “official” NCS year-end list of best releases.  Instead, each of our staff members compiles his own individual list. A week earlier than we did this last year, today we’re beginning the roll-out of Andy Synn‘s five-part series of year-end lists. As usual, we’re starting with an installment that veers off our usual theme of focusing on music we enthusiastically recommend. Feel free to disagree — some of us here may disagree as well — but also feel free to share in the Comments your own thoughts about 2019 albums that disappointed you.)

Normally I’d wait until a little deeper into December before writing/publishing my End of the Year lists, but various circumstances (including a short run of dates supporting Hour of Penance next week) mean that I’m going to be pretty busy for the rest of this month (though hopefully not too busy to do at least a little bit of writing for NCS), so you lucky people are getting the benefit of my yearly round-up a little early this time around.

As usual I’m going to kick things off with a short (shorter than usual, in fact) piece on the most “Disappointing” albums from the last twelve months, which this year contains a mix of big names, over-hyped newcomers, and, sadly, some of my personal favourite bands.

And because some of you might be a little unfamiliar with the format of this particular piece, I’m going to quote from our friends over at Last Rites, who I think summed it up nicely in a recent piece:

“The idea of this feature isn’t just to bash bands or records — it’s ultimately more about us, as fans, lamenting the releases that disappointed us the most. And, of course, disappointment implies some heightened level of hope that a release might be, y’know… good.”

It’s not a bad album, by any means, but it is extremely “safe”, and finds the band opting for a much more straightforward (and much more familiar) form of Post-Rock which, while likely to increase their profile and popularity, unfortunately sacrifices a lot of what made them so unique and exciting in the first place.

As someone who found the hype about the original incarnation of Batushka a little overblown (the album was good, no doubt, but not that good) I’ve got no real dog in the fight over which of the post-schism version is the “true” one.

That being said, Hospodi didn’t even come close to matching its predecessor’s quality or success, which does kind of indicate where the real talent lay, doesn’t it?

It’s as painful for me to have to put this album here as it is for you all to read about it, but then life isn’t always fair, is it?

Crypt Sermon’s debut was a breath of fresh, epic air in the modern Doom scene (and I’m far from the only person who thought that). But while their highly anticipated follow-up contains several tracks (“Key of Solomon”, “Christ Is Dead”, and “The Snake Handler”) which are at least as good, if not better, than the best moments from Out of the Garden, it also contains quite a bit of material that’s notably weaker and more disjointed, meaning that while the album’s highs are certainly higher, its lows are conspicuously lower too.

As a long-term fan of Devin Townsend (in practically all his incarnations) I’m very aware of how dedicated, and defensive, his fanbase can be, so I’m anticipating some significant blowback from the inclusion of Empath on this list.

Suffice it to say that while this album may represent, by his own admission, Devin at his most unrestricted and unrestrained, that very lack of restrictions has resulted in a record that feels messy and unfocussed and, oddly enough, a little bit overly-familiar.

Perhaps the best way I can explain my disappointment (something which I know I’m not alone in feeling) is that by allowing himself free rein to do whatever, whenever, it seems like Devin has given himself kind of an easy “out” when it comes to songwriting. Necessity, as they say, is the mother of invention, but when you can just throw whatever you feel like into the mix, regardless of whether it really “fits”, then you remove that impetus to actually be inventive.

This is particularly noticeable at certain moments which seem to draw directly from previous records, throwing them all together in a kaleidoscopic cavalcade of bright lights and loud noises which is somehow paradoxically both the most Devin Townsend record yet, but also one of his weakest.

As one of the UK Metal scene’s “ones to watch”, there’s a sizeable weight of expectations looming over Krysthla and their latest album, Worldwide Negative.

Unfortunately, whether consciously or coincidentally, this seems to have resulted in the band pursuing a more commercially viable and “mainstream friendly” version of their sound which, on a few too many occasions, sounds far too much like the sort of generic, sub-As I Lay Dying Metalcore which was popular about a decade ago.

There are still some very good songs on this record, and the band are still very good at what they do, it’s just a shame that a lot of what they choose to do here isn’t particularly interesting or inspired.

I’ve been a big fan of Novembers Doom ever since I stumbled across The Pale Haunt Departure in the mid-2000s, and have pretty much, without exception, loved everything they’ve done ever since.

I’ve particularly enjoyed the band’s recent run of stellar releases in the form of Aphotic, Bled White, and Hamartia, which perhaps is why I found Nephilim Grove, such a big let-down.

Again, as with most of the records on this list, it’s not a bad album, per se, and it contains a couple of big hitters, but it also holds a handful of real duds, and lacks the consistency and clarity of vision that its predecessors possessed.

Another record whose inclusion on this list is likely to provoke a swift and savage outcry, the bitter truth is that Rotting Christ have been happily digging themselves into a comfortable rut for several years now, and The Heretics is just the latest example of the band sticking to the same tried and true formula to ever-diminishing returns.

It’s a functional formula, no doubt, and one which the band have pretty much perfected at this point, but there’s the rub… perfection is sometimes just another word for stagnation, and The Heretics offers absolutely nothing new, no shocks, no surprises, no real excitement, and in fact seems to actively reuse and regurgitate ideas and melodies from the band’s last couple of albums.

Of all the artists featured here Sleep Token are the biggest victims of their own unrelenting hype machine, one which has, for the past several years, been playing up the band as some sort of semi-mythical force out to reshape the musical landscape , when the truth is that, at the moment anyway, they’re just a very poppy Post Rock band with an interesting gimmick and a very good vocalist.

Of course you can’t (or shouldn’t) blame the band for all the hype that’s been spun up around them. But it definitely doesn’t help that Sundowning sounds like it was written by committee and focus-tested to death – using lots of ear-friendly melodies, twinkly electronics, and just the barest hint of simple, djenty guitars – so as to appeal to the widest possible demographic.

There’s still a lot of promise here – every so often the band will actually break out an interesting riff or an unexpected twist, and the vocalist really does do his best to imbue every track with at least some semblance of spontaneity and emotion – but far too often the band stick to a very safe and predictable formula which ticks all the right boxes but prevents them living up to their full potential.

The last entry on this list is, much like the previous one, a victim of its own hype.

Don’t get me wrong, there’s quite a bit to love on I: Voice (“We’ve Been Here Before” and “Beneath the Forest Floor” make for an absolutely killer opening pair) but the album as a whole is overstuffed and ultimately less than the sum of its parts, and would likely have been stronger and more consistent/coherent as an EP.

That’s it for today’s article ladies and gentlemen.

Tune in again tomorrow when I’ll be listing all the “Good” albums from 2019, by which time you’ll all have hopefully cooled off a little from all the anger and disappointment generated by this piece!