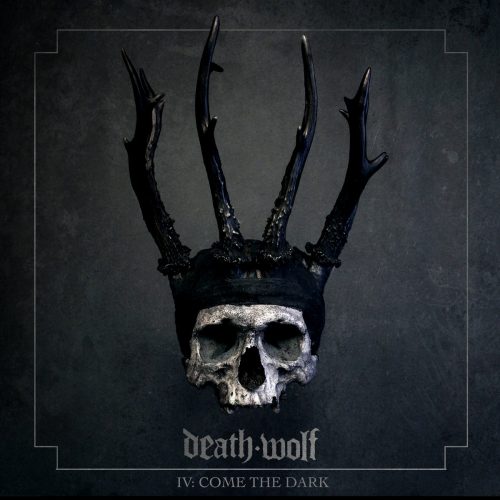 Now a fourth one is at last ready for release on December 10th by Blooddawn Productions (distributed and marketed by Regain Records). Its name is IV: Come the Dark, and we’re proudly presenting a full stream of the album today. 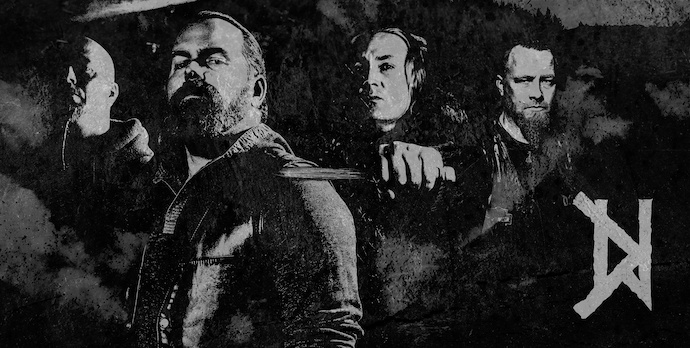 Unbound by fan expectations or the stylistic boundaries of the members’ other bands, Death Wolf has been a morphing and mutating beast. Originally begun under its old name as a means of tribute to the deathpunk sound of Samhain and the Misfits, it has become something else, and something far greater. The new album could be considered a night-dark amalgam of metal, punk, rock, and goth, but regardless of efforts to choose the right labels, it’s perhaps best thought of as a beautifully executed collection of emotionally gripping songs that all get stuck in the head like sharpened spikes.

Morgan‘s name may be the best-known of the band’s members, but their talents are a clear match for his own, as you will hear. The rhythm section (which includes Morgan‘s bass work) is a force to be reckoned with, with an affinity for rocking beats but possessing the power to shake the spine. The riffing is often sinister and vicious, but with baked-in hooks that are compulsively head-moving and irresistibly addictive, while the changing leads are sorcerous and seductive, sorrowful and soaring (among other sensations).

And the vocals are tremendously good. Sometimes they take the form of scorching howls, capable of rocketing into the skies, or the wailing of beleaguered ghosts, but they are more often clean-sung; with intense emotional power, they often carry the chorus melodies (and continually trigger the desire to sing along).

The songs on the new album are compact, and there is not a weak link among them, nor is there any risk of monotony setting in from listening to all of them. Where “With Hate” is a big body-mover paired with slow, haunting arpeggios that ring with an ethereal gleam, “Edge Of The Forest” serves up thrashy riffing and a lurching cadence matched with melodies of gloomy gothic foreboding, as well as bursts of somersaulting tom drums and seething tremolo’d chords.

The band’s interests in classic heavy metal come to the fore in the fast-jabbing riffs of “Empower The Flame” and a soaring vocal chorus melody that might cause you to lift your clawed hands to the heavens, but also includes an intense guitar-and-bass duet that manages to be both bleak and distraught.

The mid-paced, sky-bound majesty and head-hammering, battle-ready valor of “The Sword” gets the blood rushing (and is one of many songs that makes room for the bass to take center-stage), but on the other hand the dire, hopeless moods of “Funeral Pyre” take the listener in a different direction, driven by a heavy pounding cadence and shattering vocals paired with morphing riffs that channel feelings of haunting sorrow and bring us to the precipice of incurable pain.

While the songs are each distinctive in their own right, darkness walks with us always in this album, from the grim, primitive, skull-crushing stomp of “The Executioner’s Song”, whose otherworldly melodic accents  seem to embody feelings of fear and abandonment, to the doom-stricken but hard-rocking “Speak Through Fire”, which again draws upon the band’s affinities for gothic ambience and again makes room for a dolorous guitar melody that slithers and soars (and of course yet another head-hooking vocal chorus).

The chiming tones of the slow opening guitar harmony of “Serpents Hall” cast a spell, but the song transforms into a somber yet sweeping experience that’s as epic in its atmosphere as it is perilous. And right on the heels of that one “Into the Woods” is an eerie piece of sonic witchery that includes piano as well as acoustic strumming, and a swaying cobra of a guitar lead that enhances the track’s feeling of exotic sorcery (it also includes a gigantic bass line that adds plenty of heft).

The closing pair of “Iron & Flame” and “Conqueror’s Dance” create an interesting way to bring this involving album to an end, with the former taking shape as a murderous rumbling juggernaut with riffing that’s full of tension and threat, and vocals that put a knife to your throat, and the latter a stripped-down track anchored by an ominous ritual beat, with gothic vocals that are part-whispered and part-growled but eventually climb the scale in wailing intensity, backed by a shimmering melody that chills the skin but also ascends in ghostly splendor. It’s a head-moving, spellbinding, emotionally shattering way to bring a wonderful record to a close.

We hope you enjoy this album as much as we have. It will be released on December 10th but you can pre-order it now if you enjoy what you hear.

2 Responses to “AN NCS ALBUM PREMIERE (AND A REVIEW): DEATH WOLF — “IV: COME THE DARK””