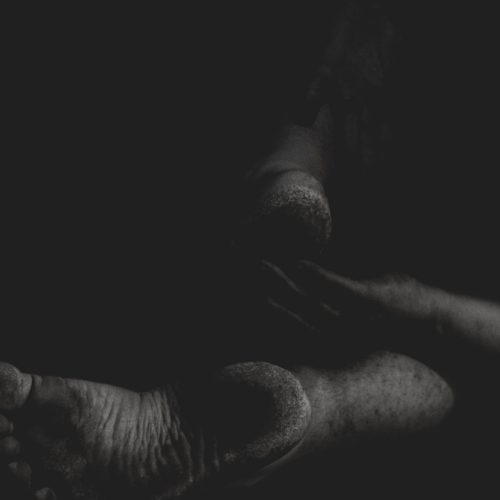 This past June we premiered a song named “Pines” from the debut album, Harm Remissions, by a trans-oceanic noise/grind trio named Fawn Limbs (presented through a video that excerpted footage from the 1933 film White Zombie). Even just that one song made a stunning impact, one that we likened to “the thrill of witnessing destruction… like the excitement of being present at the implosion of giant buildings to create space for something new”, but combined with “other thrills within the mayhem of the music which derive not from chaos but from the almost machine-like precision of their otherwise freakish demolition jobs”.

Those impressions might have seemed paradoxical, but while the track did indeed have its berserker destructive components, there was an impressive degree of precision on display as the musicians rapidly morphed from one kind of demolition to another (and delivered some unexpected groove along the way). The album as a whole — experienced as a whole — was (and is) an even more breathtaking bombardment, one that plays nasty games with your mind as this trio maniacally shift gears without warning and engage in even more extravagant displays of seething and boiling fretwork lunacy and rhythm-section interplay (along with unexpected digressions).

As the year draws to a close, Fawn Limbs have decided to give us one last blast with which to properly bury 2019 beneath rubble — a new EP that will be released on December 6th under the nightmarish title Their Holes Aroused by the Splinters Carved From Their Teeth — and today we’re bringing you a full stream of it.

The EP consists of six songs — which will barrage through your skull in a total of 8 minutes, 5 seconds. The band tell us: “The EP is both lyrically and musically an expedition to the ugliest end of our spectrum with absolutely nothing held back. Addressing subject matters of personal struggles as well as mental ailments and aberrations through a societally inconvenient and improper lens, this is undeniably us on our most extreme, abrasive, and discordant form, and we can’t wait to share it with you all.”

Flickering, wittering, and vaporous ambient tones, combined with slow, glistening guitar reverberations, create an eerie, haunting prelude to the EP, and a few other moments of digressive sound surface during those 8 minutes — abyssal electronic vibrations, moody and mesmerizing instrumental melody, hallucinatory pinging transmissions from deep space, the warbling tonalities of crazed apparitions — but otherwise, the EP hits like a combination of hurricane-strength storming, jackhammering obliteration, and something like a ride on viciously spinning carousels from a hellish carnival. You might also detect fleeting glimpses of jazziness.

As on the album, the instrumental interplay is intricate, particularly that of the rhythm section, and the changes happen almost too fast to assimilate, while the vocals scorch the senses like an acetylene torch. The guitar excretions are themselves severe menaces to sanity — a cavalcade of scorching, shrieking, slashing, and skittering forms of discordance and dementia.

As perhaps you can tell already, Fawn Limbs pack a hell of a lot of sensations into these relatively few minutes, most of them unnerving, and some mystifying, so much so that the EP seems longer than it really is.

For those who are new to Fawn Limbs, it was formed during the summer of 2018 by Eeli Helin (Mireplaner) and Lee Fisher (ex-Psyopus, Commit Suicide), releasing three EPs during the autumn/winter of that year. Starting in 2019 with a single, ”Love Will Strangle You Forever”, the band included Samuel Smith (Artificial Brain, Aeviterne, Luminous Vault) on bass, and together they released that first full-length Harm Remissions in August this year. Based in Finland, Pennsylvania, and New York, the trio are currently working on a studio-band basis.

Their Holes Aroused by the Splinters Carved From Their Teeth was mixed and mastered by Samuel Vaney at Lead & Sulfur Studio. It will be released on CD by Dark Trail Records, on cassette by Sludgelord Records, and on vinyl in the early months of 2020. You will be able to get a digital download as well. The CD, tape, and digital downloads will also include two remixes — “Harsh Noise Atrocities” by Crowhurst/Jay Gambit, and “Simplicial Complex” by Muhd/Samuel Vaney. Pre-orders are open now.

We also want to include the lyrics for the new songs, which are themselves as riveting as the music. You can find those after the stream below.

All moments pass and so will you
•
Innerved as the pulse of radiation seeps through coiling flesh and bone
A coffin of secrets
Thoughts polished of a memory of home
Plastered with hope, plastered with gold
As if you were not tied by your ankles and throat
I’m only a threat to myself
They howl and twitch
Auras echo pale from the grazed walls
Their holes aroused by the splinters
Carved from their teeth
I am a clot of sediment
A clog in your endless green vein
Deepest desperations shift
A confidential golden weapon
Those dire fucking pariahs only need a nudge
•
And they fall
Listening with deafened ears
Measuring with a hollow gaze
Thoughts disrupted by a stab
Violent surge of emptiness
Heal me by salting these addled wounds
Veer the burning vessel into the shoal
And watch it sink, savour the helpless bawl
Hew my body clean of light
Weave a tighter collar
Speak to me in a language that bears no meaning
Alleviate the ache with reassuring lies
Hew my body clean of all light, aura’s echo
Luminescent colours blend seamlessly
Come to aid, discharge me, I am not a threat
All turns into grey blur, the pulses strengthen
Motionless, improper, paralyzed, helpless
Thrust me to the shoal and watch me sink
•
Floundering while gasping for air
Ascension through drowning
Striving to climb back up from the old black hole
Hauling myself through the murk
Clinging to the feet of those passing me by
Clinging to the vain faith of those who never left
Lungs alight in an aqueous drought
And the splinters they carved from their own teeth are finally sinking in, excessively deep
Lightless, my lungs scorching
Inflate with a torrid air
•
They broke the mold when they failed you
•
Floating to the shore
Scalded by their giving tongues
Their gilded weapons molten to dross
Loosing grip of my terrain
The vivid tones and familiar echoes
All bow unconscious
Listening with deafened ears
The wails and woes resembling noise
Obtain a black shoal
Where forgiveness is forever nought
Existence, a blunt extortion
Desistance, a key to freedom
Breathing in the noxious fumes
A pleura torch, exploited as an ignition coil
Leave me, a carrion holder
Scalded by their tongues
Existence, a blunt extortion
Desistance, a key to freedom
Reveling the daunting structure
Built upon a soaking drape of skin
Where forgiveness is forever dealt under duress
Leave me, a carrion holder
Innerved as the pulse of radiation seeps through coiling flesh and bone
•

10 Responses to “AN NCS EP PREMIERE (AND A REVIEW): FAWN LIMBS — “THEIR HOLES AROUSED BY THE SPLINTERS CARVED FROM THEIR TEETH””