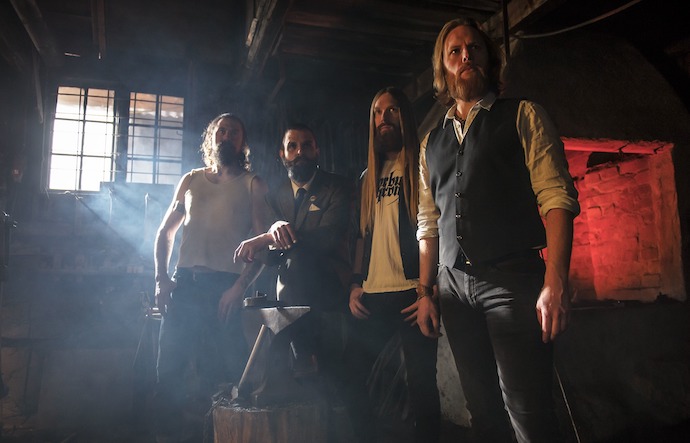 You begin your life in a diaper. If you live long enough, you’ll end it in one too. You begin your life playing with toys, and if you live long enough you’ll be playing with toys again, maybe imagining yourself (again) an armored knight vanquishing sword-wielding foes. If you’re lucky, your treasured toys will include a tiny music box in the shape of a sod-roofed house, one in which Septekh are waiting to be wound up and brought to life, to delight your age-melted mind.

If you’re wondering what prompted these thoughts, you’ll find out soon enough. But perhaps you don’t even know who Septekh are? Perhaps you’ve never seen a Septekh video, or even glimpsed the magnificence of Nils GRZNLS Meseke‘s gravity-defying mustache? How tragic for you if such is the case. But soon enough we can fill those gaping holes in your life, too. 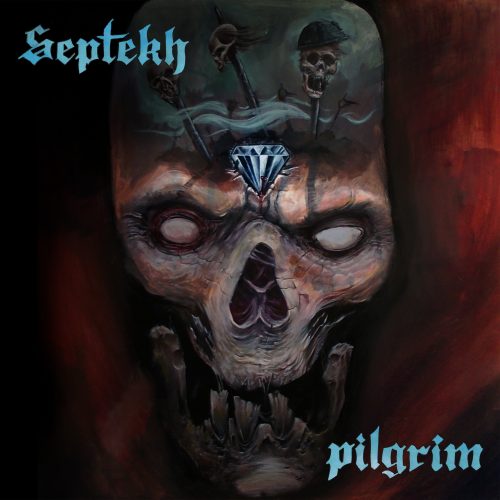 This writer happens to be a devoted Septekh follower of long standing, for many reasons. This Swedish band have a distinctive style, both visually and in their music, coupled with a twisted sense of humor and an equally twisted and distinctive approach to creating videos for their music — and they obviously have access to talented filmmakers, who have done excellent work bringing their disturbed and disturbing visions to life. Septekh are protagonists in service of the beast, and relish their role in the Plan, giving voice to transmissions from sulphurous depths.

What we’re delighted to present today is a new video for a song called “Treasures” off the band’s most recent album Pilgrim, which was released by Mighty Music in August 2018. “Treasures” is a great choice for a video, because the song is such a fine example of Septekh‘s nasty, pulse-pounding brand of blackened death/thrash.

As is true of just about everything Septekh cook up in their smoking black cauldrons out on the island of Morkö, “Treasures” is fiendishly infectious, an amalgam of hard-rocking rhythms and razor-sharp riffs well-calculated to wreck your necks. And in this case, the song has a sinister and seditious air, creating a well-tailored cloak of darkness that’s threaded with eerie, mentally unbalanced melodies and demented (but seductive) soloing. Which, come to think of it, is true of the song as a whole — it’s demented but seductive.

And the vocals… of course the vocals are vicious and wild, as always, leaving no doubt through their scorching extravagance that this is devil rock for the beast that dwells in us all.

Oh, we should mention there’s a twist that lies in wait at the end of all the rocking out (of course there is)… a big twist… but we won’t spoil that for you.

As for the video, it’s also great (credit to Studio 508 for the production). You’ve already read our own interpretation in the first paragraph above.

And with that, our fine fiends, we’ll leave you to relish the video for “Treasures”.