Hallelujah! I managed to finish Part 2 of today’s column. Whether you finish listening to all the music is a different question, because between Part 1 and this installment there’s quite a lot to be absorbed. Hopefully you’ll discover something (or several somethings) worth the effort.

I mentioned at the outset that today’s collection would include bands whose names you won’t find at Metal-Archives, and Aardling‘s debut album Transmit To A Distance is one of them — not that this bothers me, nor should it bother you. 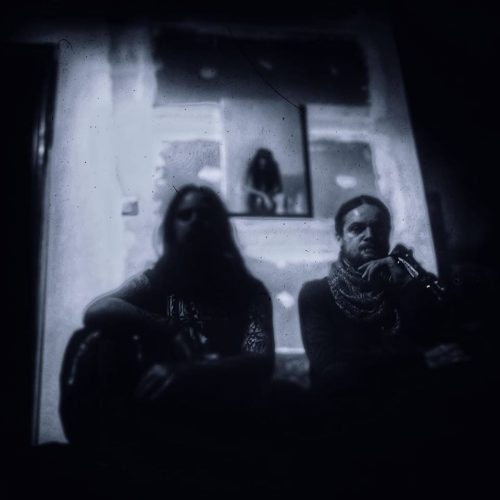 I was compelled to listen to the album when I saw that Aardling‘s line-up included Déhà on bass, keyboard, vocals, percussion, and arrangements, as well as Kim Carlsson (Kall, ex-Lifelover) as an additional vocalist. The third member of the band — Santino van der Aa, who wrote the songs and performed guitars, drums, and vocals — wasn’t immediately known to me, but I later discovered that he is a member of Hypothermia (along with Carlsson).

Transmit To A Distance, was released by Pest Productions on November 28th. The first song set to play on the Bandcamp page for the album, “Darkling Abstractions“, is one I haven’t been able to stay away from. Not that I’ve tried to stay away from it. Why should I stay away from something so good? The Metal-Archives snub undoubtedly derives from the gothic post-punk stylings of the music, on this track and elsewhere. The track begins in depressive fashion and remains a bit despairing in its mood, but the strong bass pulse, hook-y drum beats, and slashing riffs give it undeniable vibrancy, and the vocals — which combine somber but soaring song and scorching shrieks — are wonderful.

Elsewhere on this fine album you’ll find additional elements of blackgaze and post-metal, combined with those post-punk influences, and a persistent downcast yet romantic air. Luminous opalescent arpeggios and shimmering synths create a spellbinding effect right from the beginning, and there’s a ringing, iridescent quality to the guitars even when given a bit of sandpapered abrasion; they seem to shine at the same time as they squall. The rhythm section is also in fine form throughout, repeatedly triggering the primal stirrings in the brain that make us want to move.

Winding sheets of tremolo’d guitar and cascades of shining synths are judiciously deployed to good effect, creating a lush mystical overlay or an immersive shroud, but jangling chords, crystalline notes, and desperate screeching strings are equally in evidence. The vocals are gripping at all times, whether intensely intoning spoken words, magnifying the sheer wretchedness of songs like “Labyrinth of Consequences – Our Search” and “Voor Altijd”, adding to the haunting ethereality of a song like “Sirius”, or further elevating and intensifying some of the livelier pulse-pounders on the album (including “Droommiasma”) — though there are no vocals at all in one of the best of that latter group, “Luminous”.

Hardened metal addicts, whether black metal acolytes or otherwise, will probably turn away from this album quickly. I love it. 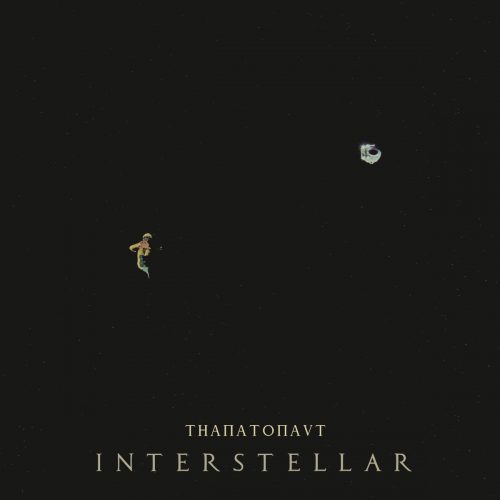 The next item in today’s collection is yet another full-length album. This one, Interstellar, is by Thanatonaut from Warsaw, Poland, which is the solo work of Eija Risen. It was released on December 7th.

The conceptual inspirations for the album were explained in a recent interview, and those inspirations fed into the band’s name (borrowed from the title of a Neige et Noirceur single), which is Greek for “death sailor”, but also shares the root “-naut” with “astronaut”. That latter commonality connects with a theme concerning outer space that is made evident in the album’s spoken-word intro, a theme that is based in scientific reality, and thus recognizes the hostile conditions and the limitations of physics that make travel beyond our solar system unrealistic. (The album’s cover art, by the way, is a frame from Stanley Kubrick’s 2001: A Space Odyssey  drawn from a sequence that portrays the death of Frank Poole after he was tricked by HAL 9000 into exiting the spaceship.)

And so, while Interstellar isn’t the first black metal album to be inspired by themes concerning deep space, it’s one that doesn’t seem to view the cosmos as a mystery waiting for us to reach out and touch, or as a safe harbor from our own depredations of Earth, or as a future home, but as a sphere that will likely be forever beyond our grasp.

On the other hand, the music itself produces the same stunning, awe-inspiring reactions that one experiences in contemplating the vastness of the universe and the wonders we can now see only through the most powerful telescopes. The enormous waves of soaring synths that cascade through the mind, along with the titanic, heaving undercurrents of low-frequency sound, the backing shrouds of abrasion, and the furiously racing or methodically detonating drums, are breathtaking in their impact. Yet as wondrous as these sounds are, they are just as foreboding and frightening, just as hostile as they are heavenly.

The album is a very long one — more than 50 minutes even after that spoken-word intro, divided among only four tracks. In an effort to maintain a hold on the attention of listeners whose attention spans are on a hair trigger, Thanatonaut interweaves divergent rhythms, soaring symphonic melodies, ethereal keyboard notes, spooky shimmering transmissions, and a variety of vocals — harsh, somber, and near-operatic.

But the dominant impression is one of immensity, the music often resembling the output of a battalion of cathedral organs and an angelic host armed with swords of flame singing in unison. It’s relentlessly dramatic, almost relentlessly overpowering, and well-calculated to make us feel dwarfed by hostile forces almost beyond our ability to imagine. It might take its toll on you to be in the grip of such sensations for such a long time, or it might blow your mind (in a good way). Only one way to find out.

(I owe a big “thank-you” to Miloš for making me aware of this album.) I began with a Pest Productions release, and am now turning to another one, and it happens to be another album that’s a bit off the usual beaten paths for this column.

On December 12th that label will release an album named Dying Away In the Deep Fall by the Chinese band Dopamine. Metal-Archives states that one of Dopamine’s members (Deng) is also the owner of Pest Productions. It also states that Dopamine split up in 2010 following the release of a self-titled EP. However, in perusing the Pest Productions Facebook page I saw an October 2019 announcement that Dopamine would be playing their first show in China this winter. In addition, I found another announcement on Facebook from 2012 that the band had been re-recording the music on this album.

So, the best I can determine is that Dopamine is not dead and that although the songs on Dying Away In the Deep Fall were originally composed and recorded long ago (perhaps in instrumental form), they have been re-recorded, leading to this release. If anyone has more definitive info about it, please leave a Comment below.

The music reminded me of Deafheaven, a band who still connect with me despite the derision that name often elicits in certain black metal circles I travel in. Like much of that band’s music, Dopamine‘s songs have a heart-on-the-sleeve emotional quality. They combine gleaming, reverberent guitar melodies that convey yearning, wistfulness, introspection, desperation, anguish, and maybe even a bit of joy, in spellbinding fashion — as well as electrifying surges of torrid, mind-spearing riffage, hurtling drums, and shattering vocal shrieking. Dopamine craft beguiling (albeit often depressive) melodies, both soft and loud, and loop these contrasting sensations until you become their captive.

You’ll figure out pretty quickly whether this is your kind of thing. In the right kind of mind-frame, it definitely is mine.