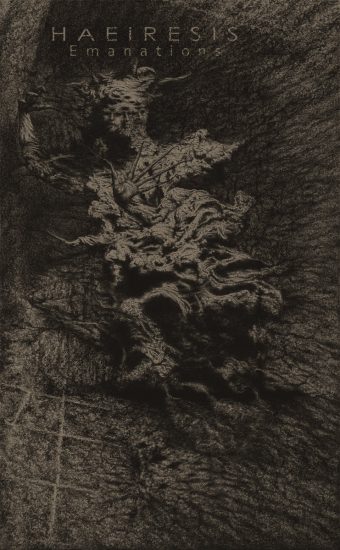 There’s so much music here that I have divided this into two parts to make it more easily digestible. There’s a risk I’ll never finish part two. The all-or-nothing strategy might have been better (to be determined).

I will add that there are three bands in this collection that you won’t find on Metal-Archives, which I mention as a hint about the diversity of sounds you have ahead of you.

Saulius Bielskis is a prolific creator, with a half-dozen active bands and solo projects to his name. Haeiresis is one of his principal endeavors, with four EPs, a split, and a 2011 album on the Haeiresis discography. The most recent of the EPs, Emanations, is a three-track effort released on tape on November 11th by an underground Lithuanian label named Ghia. It was developed and finalized at the same time as the 2018 Haeiresis EP, The Bleaking. If you listen to both EPs, it will probably become clear why the two were released separately rather than as a single album-length work. 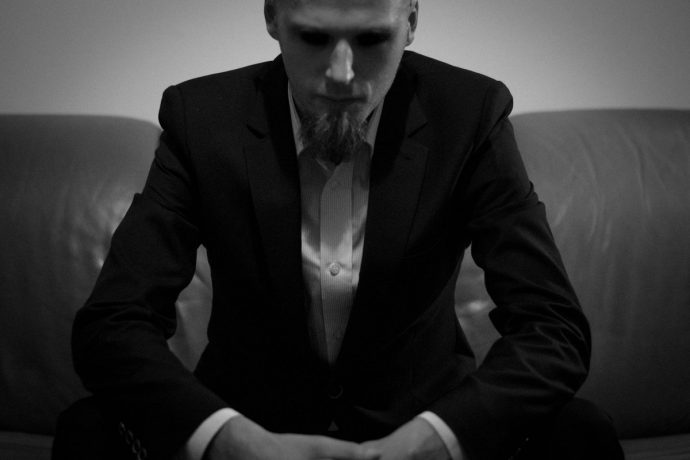 Emanations is a good title for this three-song collection. The dissonant ringing tones of the guitar and the rippling reverberations of the keys do sound like eerie emanations from some spectral dimension. On the other hand, the cavernous depth of the bass and the gut-busting impact of the drums create a punishingly heavy impact, and at speed they drive the music to heights of ravaging mayhem. The vocals are wide-ranging, with vicious, unhinged shrieks and abyssal roars at one end of the scale and wretched singing or wailing chants at the other.

The music in each track is ever-changing and ever-unsettling. One moment, it might sound like oppressive, world-ending doom, or the soundtrack to a pile-driving demolition of skyscrapers, and the next it might explode in a seizure of jolting, jarring, spasming discordance and delirium. Foreboding titanic marches give way to writhing paroxxyms of string-bending mutilation. The intricately conceived music conjures feelings of tyranny, fear, agony, and despair. And it manifests all these emotions (and more) in a way that’s both hallucinatory and somehow larger than life, as if we’re both participating in a mental breakdown and also witnessing a Pandora’s Box of terrors playing out on a grand scale.

In a word, stunning.

(Thanks to Rennie of starkweather for recommending this one to me. Neither one of us can figure out why FB considered his link to the Bandcamp stream a violation of community standards.) 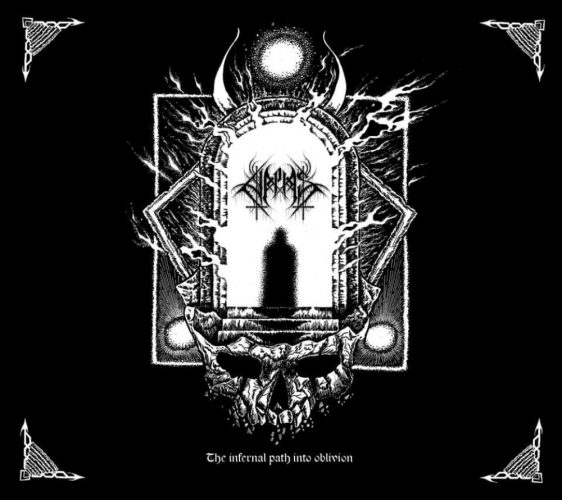 Halphas are the only band in this two-part collection that we’ve written about before at NCS. Their 2017 debut album Dawn of A Crimson Empire (available here) was released by Folter Records, and the same label is releasing a second album on December 13th.

The new one is named The Infernal Path Into Oblivion, and so far two tracks from it have surfaced, both of which you’ll find below. The first one, “Into Eternity We Ride“, is as “epic” as its title suggests, and also as warlike as a battle anthem at Ragnarok. The haunting, sinister introductory music that occupies the opening minutes is mesmerizing, but only sets the stage for battering blast-beats and an amalgam of seething and rapidly jabbing riffs, as well as slow-moving waves of cold yet glorious sound, with a melodic character that ranges from sounds of brooding and bleakness to racing cruelty, imperious defiance, and sweeping grandeur. Augmented by scorching shrieks and soaring wails, and a prominent bass performance, the music is electrifying.

The second song below, “Bones and Dust“, is shorter and gets to the point quickly, immediately jumping the pulse-rate necessary for a war charge. But like the first song, this one also has a sweeping, panoramic character, notwithstanding the heart-palpitating vibrancy of the rhythms, the bursts of blaring chords, and the unchained extremity of the vocals. It also often has an emotional resonance that tugs at the heartstrings, as if portraying a grand conflict that we already know will end in tragedy.

(Thanks to speelie for letting me know about these new Halphas tracks.) 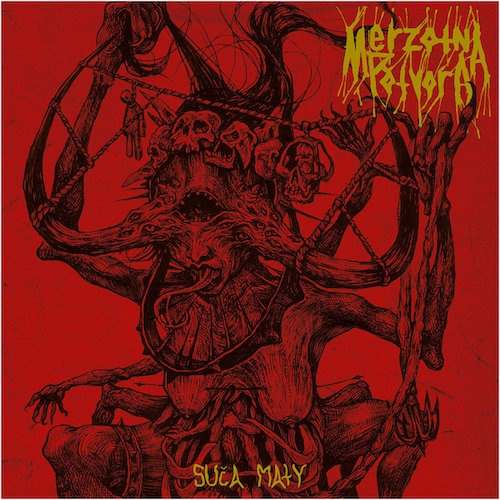 This is a two-person band from Ukraine, and their five-track debut EP Suča Maty was released on CD by Oslo’s Duplicate Records on September 6th.

The first track is an introductory piece that’s longer than intro tracks often are, but you shouldn’t skip over it. The combination of ominous ambient sounds, lively organ melody, martial drum rhythms, and harrowing wails form a scary prelude to what quickly becomes a big jolt of adrenaline, and by that I’m referring to “Pesyholovci“, whose galloping rhythms and slashing chords will put your pulse-rate into overdrive. There’s a crazed feeling to the roiling and darting guitars, which seems in keeping with the sinister and slightly lunatic feeling of that opening organ melody. And speaking of lunatic, the growled vocals are a fine display of vicious demonic insanity.

That song is also damned infectious, and becomes even more interesting thanks to the changes that start happening at the song’s mid-point, when the music (including the drum rhythms) begin to sound more exotic to these North American ears. There’s also a wild, flickering guitar solo that adds to the sense of orgiastic and sulphurous abandon that the track generates.

Rather than subject you to the potential tedium of a continuing track-by-track commentary, I’ll just say that all the other songs are just as much of a blast to hear as “Pesyholovci”. The production lends them clarity as well as body-moving power, and while there is a definite infernal atmosphere to these wild, dervish-like romps, they have tremendous carnal appeal — a kind of thrusting and lusting allure that seems bacchanalian.

There’s a temptation to get hammered and naked while you listen, but don’t worry — even if you’re not a heavy drinker with a propensity to tear your clothes off, the music will make you feel that way, safely within the confines of your own skull. Or maybe you’ll just want to imagine yourself on the back of a big piston-pumping, smoke-belching, flame-spewing chopper eating up the pavement, charging down a highway to hell.

In other good news, Merzotna Potvora are at work on a debut album expected in 2020.

This small two-track EP by a band from Vladimir, Russia, proved to be a big eye-opening surprise. Dødsblikket was released on November 22nd, and despite how much scurrying around I do amidst the froth of new music on a daily basis, I’ve been making time to listen to it almost every day since I discovered it. Although the band is from Russia, the band’s name doesn’t look Russian. Tomhet seems to be Norwegian for “emptiness”, but who knows what Tømhet means? If Google Translate is to be trusted, the album’s name seems to be Norwegian — for “deathgaze”.

The first of the two songs, “Necklace Of Rotten Teeth“, is itself a two-part track, or at least that’s how I think of it. At the beginning, the wistful acoustic guitar melody and high, vaporous vocals create a sad, haunting feeling — but after that, the clobbering drums, teeth-bared vocals, thrumming bass lines, and mad, raking riffs create a very different feeling. The vocals truly are berserk, and the music burns like a wildfire, though Tømhet throws in some scampering drum beats and rapidly morphing fretwork to add to the song’s full-throttle, brain-boiling energy.

The second song, “Seven Trembling Feet“, is more measured in its cadence (a kind of heavyweight lurch and stomp) and more ominous in its riffing, but that also turns out to be a prelude to another glorious, super-heated revel — though that monster stomp later returns. Like the first song, this one also gets stuck in the head really fast, and very firmly. Like the songs of Merzotna Potvora above, there’s also a palpable and primal carnal quality to the music. And to round things off for this little two-track gem, Tømhet delivers another acoustic guitar performance at the very end — sober and somber in its sound.