Sylosis are returning with their first new album in five years. Entitled Cycle of Suffering, it will be released by Nuclear Blast on February 7th, and includes the work of new bassist Conor Marshall. The first advance track, revealed through the first video in today’s collection, is “I Sever“. 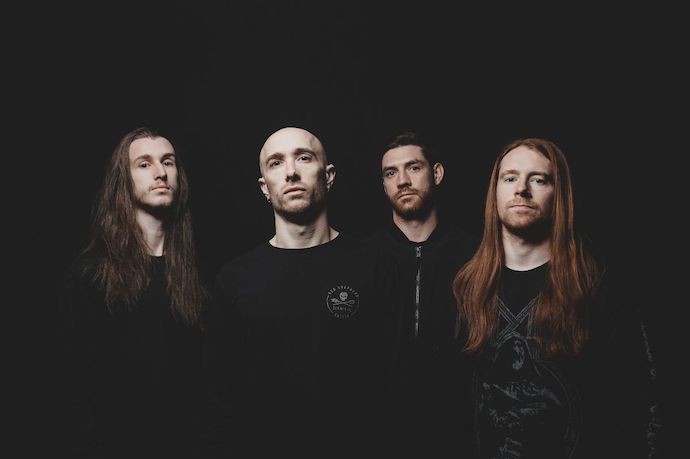 I must admit that what I enjoyed most in this new song were the first 19 seconds and the last minute and a half. That somber acoustic melody at the outset has a medieval air, which I’m a sucker for, and the band pick it up again at the end, in a way that causes the song to soar in grand, heart-breaking fashion. The vocals in that closing section are still harsh, but a wonderful example of how, done right, harsh vocals can seem like singing.

I don’t mean to put down the thrashing gallop that comes in between those two segments. It does get the motor running, and includes an invigorating steel pulse that surfaces and re-surfaces in fine groovesome fashion, as well as an attention-grabbing guitar solo that precedes that wonderful closing segment. But that’s not what’s going to stand out in my memory of the song. 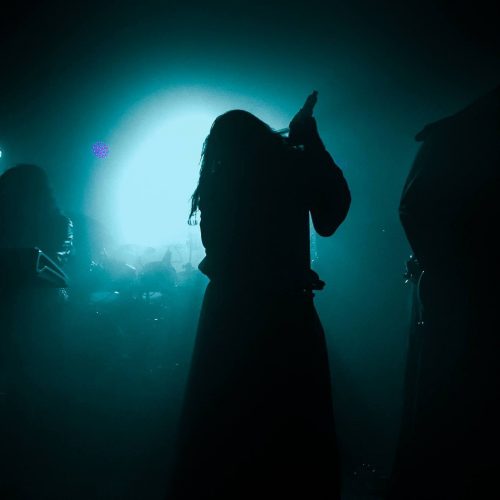 The only reason I happened upon this next video is because it popped up in a sidebar on YouTube alongside something else I was listening to (we still haven’t received any press releases about it). I usually don’t pay much attention to what’s in those sidebars, but the thumbnail for the video showed a robed figure behind a mic and a reference to the AOP Records label, so I decided, what the hell, let’s see what this is about.

Turns out the video is for a demo version of a song called “In the Corner of A Dead End Street” by an Israeli band named Tomorrow’s Rain. The video depicts performance of the song in front of a live audience in Tel Aviv, though the music doesn’t appear to be the audio from the live show.

I have little doubt that the song will appeal to fans of such bands as My Dying Bride and Paradise Lost, and to fans of Fields Of The Nephilim and The Sisters Of Mercy. The vocals, which range from deep, gothic intonations to harrowing goblin snarls and howls, and wretched roars, have a lot to do with the song’s appeal, but the combination of ethereal shimmering tones, craggy and jolting riffs soaked in misery, and gut punching rhythms, are equally transfixing. The song is steeped in doom, but becomes feverishly anguished and electrifying, and the extended soloing near the end is a thing of grief-stricken glory.

“In the Corner of A Dead End Street” will appear on a debut album by the band, which is still untitled. Notes on the YouTube clip state that AOP Records will release it in mid-2020. The notes also identify this jaw-dropping line-up of guests who will appear on the album: 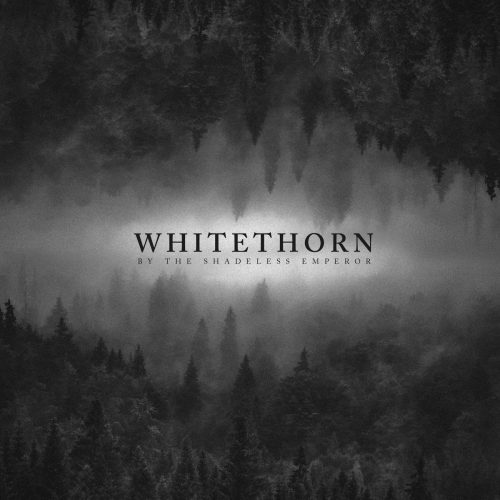 I first learned of The Shadeless Emperor through a round-up that my comrade DGR compiled for us back in 2016. At that time this Greek band had released a single called “Sullen Guard” from a forthcoming album named Ashbled Shores, and in 2017 I wrote about another song from the album called “Too Far Gone”. The album was subsequently released in August of that year by Wormholedeath (you can find it here).

What we have now is a new single that the band released on December 6th (mixed and mastered by Jari Lindholm) called “Whitethorn“. It was accompanied by the video you’ll find below, which combines vistas of nature and shadowed film of the band performing.

The song is another beautiful example of the band’s execution of melodic death metal with a doomy, Insomnium-esque influence. Which is not to say that the song is gloomy — in fact, when the band turn up the heat, it’s a pulse-pounding rush, and the song sweeps in panoramic fashion, accented by head-hooking piano keys, mesmerizing guitar leads, and a full panoply of spine-splintering grooves. The vocals, which begin as moody singing, transform into livid, flesh-ripping howls. And it’s no surprise, given the band’s previous output, that the song easily gets stuck in the head. 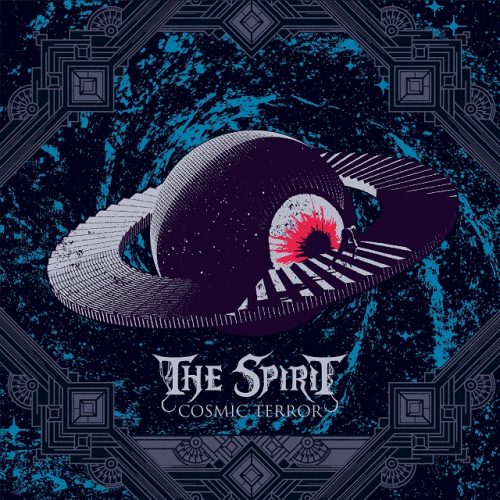 Two and a half years after the self-release of their 2017 debut album Sounds From the Vortex (re-released on Nuclear Blast in August 2018), the German trio The Spirit have a second album headed our way, recorded with producer V. Santura (Triptykon, Dark Fortress). Bearing the name Cosmic Terror, it will be released by AOP Records (which makes the second band on the AOP roster in this round-up) on February 7th.

On December 5th the band released a video for the second single off the new album, “Pillars of Doom“, which was also separately released as a 7” EP, along with a track called “Extending Obscurity”. A lot of people put a lot of obvious effort into the video, which is a riveting thing to watch. The song is riveting too, a hybrid of melodic black and death metal that combines feverish, turbocharged energy and weeping anguish. The rapidly swirling riffs are delirious but also hook-filled, deeply melancholy but also grand, while the drum-and-bass work and the scorching vocals are experly designed to keep the listener’s pulse-rate in the red zone.

And man, the song is ridiculously infectious.

Below I’ve also included a stream of the album’s first single, “Serpent As Time Reveals“. 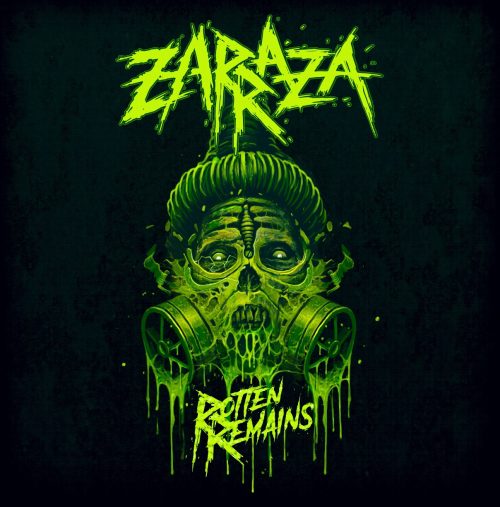 The last time I wrote about Zarraza, a band based in far-flung Kazakhstan, was two months ago in another one of these round-ups. At that time they had just released video for a track named “The Grudge“. The video was filmed in the mountains around Big Almaty Lake in Almaty, Kazakhstan and features guest musician Anar Kassymova playing a traditional instrument called the kyl-kobyz. If you haven’t seen and heard it, you absolutely should (here).

The music in that video was a re-recorded version of one of the band’s older songs, and it was included on an EP named Rotten Remains, released on November 29th, along with other older songs that had been re-recorded by the band’s current line-up. The song featured in the next video in today’s collection, “Chaos“, is also on that EP.

The video is terrific. It pairs the music with live footage filmed by three brave cameramen at the Zhest Club in Almaty on November 30 of this year, and the edited film really captures the hell-raising impact of the music. And the music really is hell-raising — a full-throttle rocket-ride of heavy-grooved hostility, accented by gloriously crazed melodic arpeggios, eye-popping drum mania, and savage-as-hell vocals. 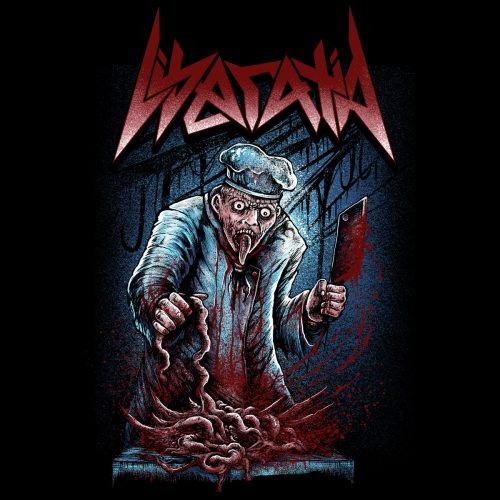 To close today’s collection I have something you almost might expect to see on The Food Network — almost.

I mean, the food preparation depicted in the video might work on a Food Network show, though the black-gloved hands of the chef might seem a bit peculiar, and you definitely wouldn’t see the kitchen work accompanied by footage of a long-haired metal band blasting out their music in a cavernous warehouse space. There’s something else that turns out not to be par-for-the-course, something that might quickly shut off your salivary glands once you figure it out.

The song in the video is a single called “The Flayed Man“, which was digitally released yesterday by the Canadian melodic death/thrash band Liberatia (from British Columbia), who have been inspired by the likes of The Black Dahlia Murder, At The Gates, Dethklok, Havok, Archspire, and Beyond Creation. It follows their debut album The Keeper, which was released in 2017.