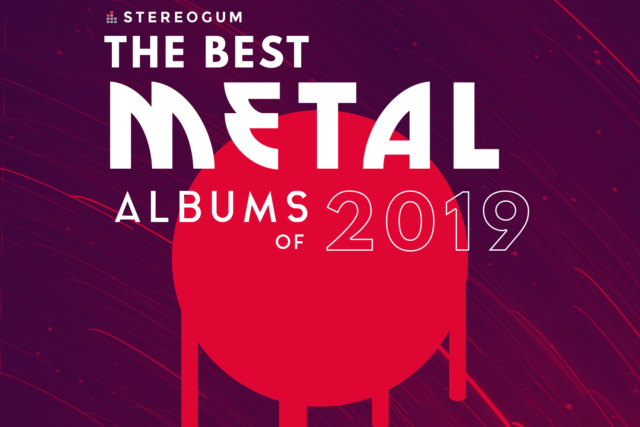 Stereogum easily qualifies as one of the “big platform” web sites whose year-end lists of metal we perennially include in our LISTMANIA series. Of course, the site appeals to an audience of music fans much larger than devoted metalheads (they have, for example, a list of the “50 Best Albums of 2019“ across many musical genres — which includes only two albums that I think would qualify as metal), but its staff includes a talented and tasteful group of metal writers who among other things are responsible for the site’s monthly “The Black Market” column, which has been a great source of discovery for extreme music for seven years running now.

It follows that Stereogum‘s annual metal list is one I especially look forward to seeing every year, and the 2019 edition appeared last Friday. It consists of only 10 entries, collectively assembled by Ian Chainey, Aaron Lariviere, and Wyatt Marshall (and perhaps the ghost of Michael Nelson).

The list of 10 is preceded by “the inaugural edition of the Black Market Glossary, a reference guide designed to help new readers interpret what the hell we’re writing about” — which is hilarious. An example: BUTTCHUG — “a juggawugga or big chungus riff that is so spartan and elemental in its chuggery that it can only be derived from the butt.” I think we know exactly what kind of riff that refers to, don’t we? And now we have another word for it.

The list is further preceded by Aaron Lariviere‘s “caveat of caveats”, which I think is worth repeating here:

“As the sacrificial goat chosen to kick this thing off, it is my job to deliver the bad news up front: This list will disappoint you. (Also, ranked year-end lists are dumb, dumber than our usual lists, which is saying something.) Apologies if this sounds familiar. I can’t say this in clearer terms than I did last year, and I won’t try, so let’s go ahead and make your disappointment an annual tradition, like drinking spoiled eggnog and laying waste to a public restroom.

“No apologies, however, for the contents of this list, which is objectively perfect to the extent it accurately reflects our collective favorites. (I am told Ian used predictive translation software to decode our appreciative OOGHs, then fed the quantified results through proprietary AI and/or Excel formulas to ensure an accurate distribution of Metal Points; I won’t pretend to understand such wizardry.) Presumably it looks nothing like your personal list, which makes sense because, last we checked and despite our best efforts, we are not you. Unless the things you love happen to perfectly align with the schizoid nonsense we slapped together and labeled “BEST OF 2019,” your thirst for listicular validation shall go unquenched. There will be no Blut Aus Nord. No Inter Arma, Tomb Mold, Tanith, Alcest, Gatecreeper, none of it. For better or worse, just like last year, we made a collective choice to eschew grand narratives and editorial coherence, and instead give you our unvarnished favorites — the things we loved most (or hated least). Life is short, cruel, and full of idiots (like us), so this is what you get. Happy December.”

And now for the list itself — though our re-pasting of the choices isn’t a substitute for reading what’s written about each selection at Stereogum, or for that glossary (go HERE for that added enjoyment and elucidation, and to drop comments explaining how disappointed you are).