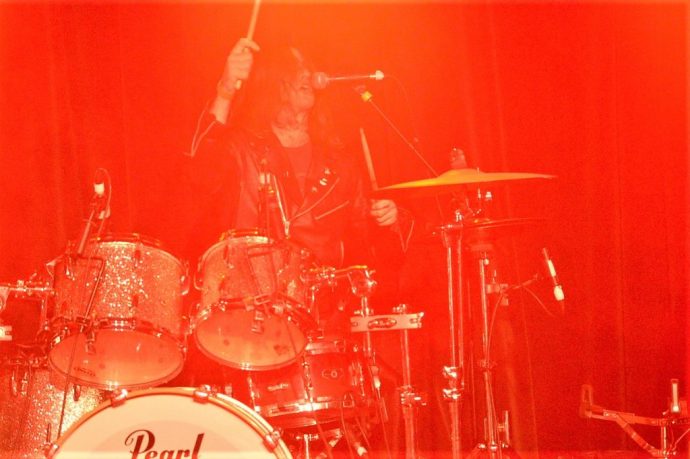 (Comrade Aleks has brought us this interview with drummer/vocalist R of the Australian underground band Tyrannic, whose latest record was released by Séance Records in February 2019.)

This project from Sydney has spread the bestial morbid vibe of savage Celtic Frost / Hellhammer-oriented thrash / doom metal for almost nine years. Did Tyrannic succeed on their path? Some way, yes — Séance Records helped them to break through releasing their first full-length Ethereal Sepuclhre (2018) and the fresher EP Exterminating Angel. How do things go in the deep Australian underground? R (drums, vocals) is here to shed some light on Tyrannic’s gloomy existence.

Hi R! How are you?  What’s new in Tyrannic’s life?

We’ve performed some live shows this year that are a great memory for us, although in the last few months we have begun constructing material for our second full-length album. For the last year we have been working with a new guitarist and are taking time to craft the direction that the six new songs for this LP are heading in.

Metal-Archives shows that Tyrannic’s first self-titled demo (2013) and following tape Macabre Festival Of Nosophutos(2014) were recorded with only you in the band. Is it correct information?

Unfortunately, not. The self-titled demo was the beginning of a line-up which lasted for a short time. Guitar and bass on the recording was done by the first guitarist of the band (also went by the name of ‘J’, as opposed to the later ‘J’ who joined after the first demo). We had a live bassist and second guitarist who later joined Innsmouth while they were still playing shows. This line-up more or less dissolved within six months of the demo being recorded, and the band was finished. I wrote the songs for the demo so I decided to continue the band on my own by writing more for newer recordings. (The other) ‘J’ (who also appears on the Sluggard split and Ethereal Sepulchre) joined the band at the end of 2013 to record guitars and bass on the Macabre Festival demo, which was the beginning of us as a duo writing and recording. Things became more clear from this point as to what our intended sound and expression would be. 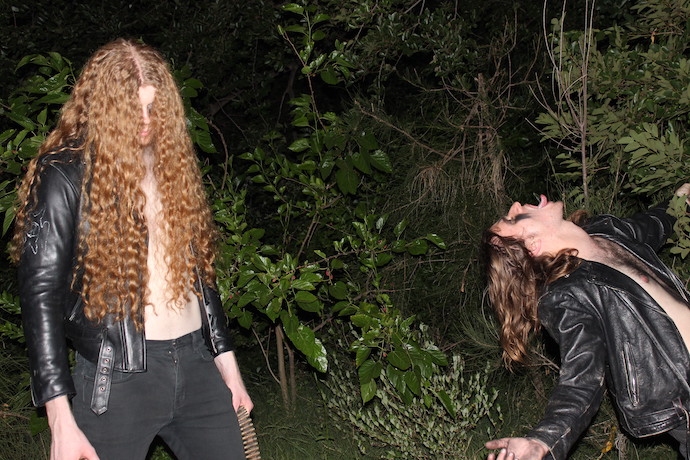 I see that until 2016 when you took part in the split with Sluggard the project wasn’t much active. Were you unsure about Tyrannic’s direction or was it because of the same problems with the lineup?

This was actually the definitive time for us knowing what we wanted to do, and we spent a lot of time writing. It was an in-depth process and we went mad getting songs done. The two of us were quite active already constructing songs for Ethereal Sepulchre. Although on the live front we would only play few shows due to the fact that people barely knew of us at the time and in Australia you are lucky to see a good line-up for a metal show once a year, in Sydney probably even less. We never had interest to play with just any band. That’s why by 2015 we decided to just play a special DIY show every year in a special outdoors location when it came to a Sydney show. We could do it without any limitations, and it would be in total darkness, not for anyone but ourselves. When ‘J’ and I performed live as a duo there were no issues in the band as we didn’t need a second guitarist or bass player at the time to make a raw and heavy sound.

I didn’t find anything about you and J’s background. Did you play in any bands before?

‘J’ has left Tyrannic to live overseas and currently plays in Throaat, who have some excellent new material in the works. They are one of the few newer bands out there with something interesting to show in their music. However, he still contributes on newer Tyrannic material in some parts that he can record from overseas.

I myself only play in Tyrannic. I don’t do any other bands

Currently, the new line-up consists of; ‘A’ on bass, since Exterminating Angel, ‘K’ who is our new live guitarist since the EA recording, although will also be contributing on the next album, and myself doing drums and vocals. 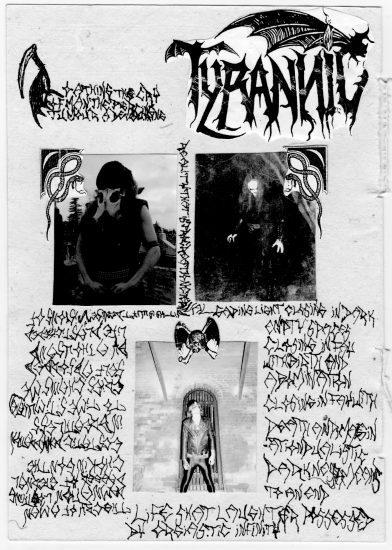 What’s the reason to hide your real names? You know it looks as if you work in government, or well… I don’t know… as it could harm your reputation…

Hahaha, well, that would be embarrassing wouldn’t it…

To tell you the truth, we never used names, real or pseudonyms. The mere reason for using initials in this interview is to avoid confusion of past members being thought to still be in the band, or to more or less sign off for interviews or anyone who contacts us about the band.

In our releases we do not credit names at all, not even initials. The reason for this is that I prefer the expression of Tyrannic to be about something bigger than us as people, despite the lyrics being personal to me. There is no part of myself desiring to gain recognition for anything. As people we are nothing special, we are irrelevant. This is a major part of what the band is about.

Finally your first full-length Ethereal Sepulchre appeared in 2018. It blends the raw doom sound of the early ’90s with the reckless straightforward delivery of Celtic Frost / Hellhammer. Did you aim to replicate features of both in this album?

To a degree, of course. Since the beginning of learning how to play instruments and as I was writing I wanted it to be raw and limitless but also naturally guided by the bands which I was most passionate about. Celtic Frost was the greatest influence at the time and they still are. Although they remain a great influence not just because they are a staple of what is referred to as an “old school” sound, but to me they were a band without boundaries. I just wanted to play dark metal that was not bound by anything. I don’t want to be confined to any subcategory or genre despite what our influences may or may not be. 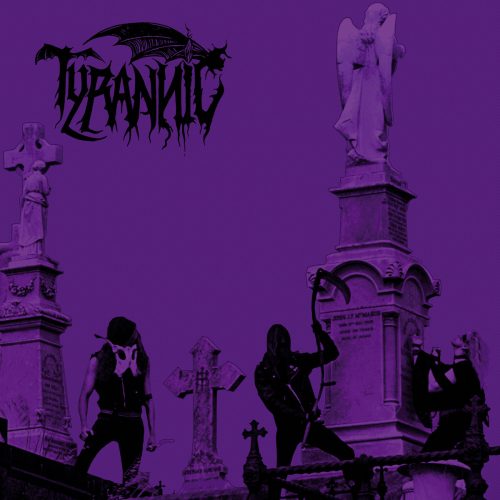 Where and for how long did you record this material? Was this old school sound your goal as well?

Ethereal Sepulchre was a long and painful process. The band once again had begun to dissolve due to line-up issues, and my general exhaustion and frustration with the time and energy consumed to complete the album was bringing me down. Tracks were recorded separately within the space of at least six months and files were lost for a long time. Everything was over with the band probably a year-year and a half or so later (I honestly can’t remember when), but in the end it was finally done and released. Once again I guess the old school sound was not necessarily a goal, but our influences fall under that umbrella term which inspired our main drive in the beginning to make something real and specific. That being said, we always wanted to expand our sound as much as we can.

Would you like to record the next album live at studio? I guess it suits Tyrannic’s spirit well.

Whilst material recorded up to now hasn’t been recorded live, there is still somewhat improvisation and finding the right sounds in the recording process. After rehearsing there are interesting changes that naturally occur when you approach things in the ‘conventional’ recording method, however we are also considering recording live in the future. 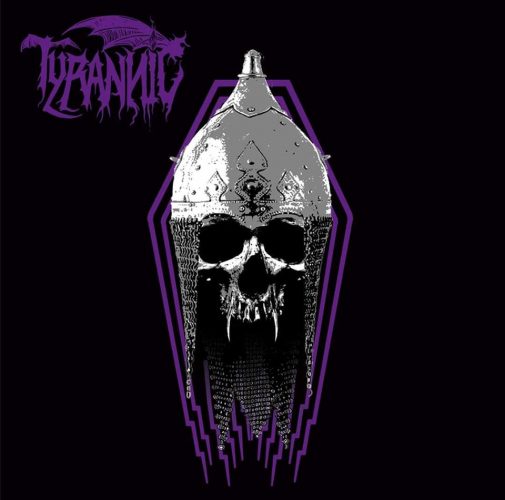 Séance Records released EP Exterminating Angel in March 2019. Do you see it as development? There’s a well-known German band Warhammer, which has paid tribute to Celtic Frost for more than twenty years, and they have kept their certain sound for years as it’s their goal to keep this old school spirit alive.

It is definitely a development since the demise of the band after Ethereal Sepulchre. Those songs were worked on for years under a completely different line-up and circumstances. After the disbanding I once again decided to write and record alone, starting everything anew. It was a continuation of the band of course but under completely different circumstances. With ‘A’ joining on bass I did the rest of the instruments with the exception of a guitar solo by ‘J’. There was a lot more urgency and determination to continue Tyrannic as opposed to with the album. Everything was written and recorded within the space of a couple of months minus half of one song, being an old song written for Ethereal Sepulchre but rewritten as Exterminating Angel. It is how we will aim to make our material sound from now on. There was more spirit in the air. The bleak sun was burning over the Summer and excess was high. Total embrace of destruction!

There’s an ancient Russian war helm on the EP artwork. Did it just fit right, or did you put any special meaning into this image?

The connection is to my ancient Slavonic heritage which will always be an influence on the lyrics, although they are not directly related to any historical or material ideals/concepts, as the main concept always will surround Death and the obsession with the beyond. The art can somewhat represent one’s experience merging from strength and perseverance as a human to giving into complete madness and intoxication with the morbidly obsessed side of life.

How would you sum up Tyrannic’s lyrical message?

My connection to the other side. It is a personal approach of writing from experience and observation of the great incomprehensible force that defies all logic and meaning. Coming from this perspective is to remove any outside influence of how the average person can see as Death, rather than making it a message to an audience for people to collectively relate to.

Did Tyrannic gain some recognition with these recordings? For an underground band on an underground label, it’s hard to speak about world-wide popularity.

As typical as it may be for some to say, the idea of popularity is not a concern. We have seen more response and have received more contact from people around the world about Tyrannic, although as long as those who are interested are genuinely interested, that is fulfilling enough.

We are pleased to be on Séance Records not just because they are an underground label, but more because they are a label that doesn’t rely on any trends and they choose to release what they personally believe in. It is a more selective and honest approach. For that I am grateful.

Got your point! Thanks for the interview R! How would you like to finish it?

Thank you very much for the interview, Aleksey! It is an honour. Your interest in the band is much appreciated. Exterminating Angel will be released on LP in the coming months via Into Endless Chaos records.

One Response to “AN NCS INTERVIEW: TYRANNIC”