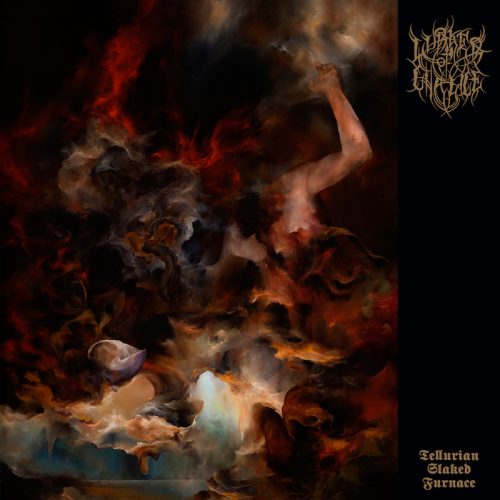 Now, there will be another Lurker of Chalice album, though it may not be exactly what people were hoping for. 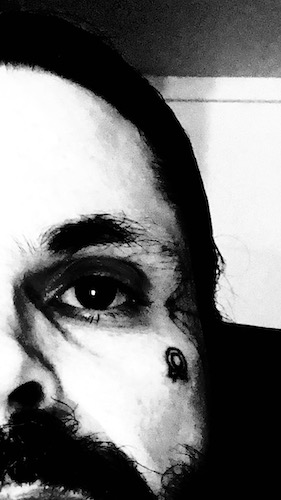 At a few points after the interment of Lurker of Chalice around the time that lone album was released, Wrest has mentioned that he had other Lurker of Chalice material. As late as 2016 (in this interview) he said he still might record another LoC album “if solitude permits”. But Tellurian Slaked Furnace isn’t exactly new material, though perhaps it signals a renewal of interest by Wrest in this project.

Tellurian Slaked Furnace is about 70 minutes long. It is described in press materials as tracks that Wrest selected from two CD-R demos that preceded the self-titled album. According to that description, he then “edited, collaged, and compiled it, weaving together something more coherent and album-like”. The music is reportedly more experimental and musically difficult to categorize than the debut album:

“Delicate ambient passages and labyrinthine excursions give way to electronic dirges of lumbering percussion with guitar shimmering transcendent above a melancholic lake of atmospheric sound and cascading sheets of electronics dissolving into lush acoustic melodies. Only very rarely do heavy riffs emerge; compared with Wrest’s work in Leviathan, or even the Lurker of Chalice album, the metal elements are far less direct and overt. Instead, this album conjures a bleak, unsettling mood without resorting to the compositional trappings of black metal.”

Having made my way through the album once (which is not enough), I can attest to the accuracy of those words. Attempting to dissect or describe it further requires more time than I have today. I’ll just focus on the one track that’s publicly available now, which is the fourth track of 12.

About 2 1/2 minutes into the track a gravelly bass rumble emerges… Until then, the music consists of changing waves of low buzzing and high shrieking tones, with abrasive lashings of other violent sound. The effect is perversely hypnotic, and it persists… until at about 3 1/2 minutes Wrest segues into a kind of skipping drum-and-cymbal rhythm over rapid bass picking. Frightening voices can be heard, amplifying the track’s disturbing impact. Eventually, that drum beat and those voices go away into the ether, and it’s just the bass vibrations and a scattering of cymbal ticks.

The fantastic cover art for Tellurian Slaked Furnace was created by Rodrigo Pereira Salvatierra. The album will be released on March 1st by Nuclear War Now! Productions in double-LP, CD, and cassette tape editions. Pre-orders aren’t up yet. 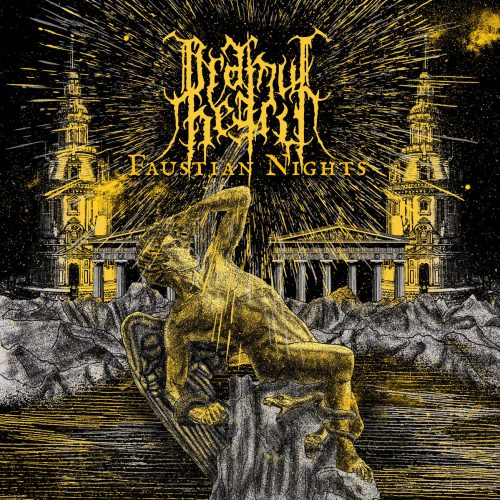 In the summer of 2018 my friend Mr. Synn sang the praises of Faustian Nights, a record that he called one of the best black metal albums he heard in 2018. That was the eighth full-length by the Romanian band Ordinul Negru (“Black Order”), though it was their first appearance at our site and the first exposure that Andy and I had to their music.

Faustian Nights did leave a lasting impression, and so I was excited to see that on January 1st Ordinul Negru released a lyric video (directed by Xander Coza) for what might be my favorite track on the album — “Elder Magik“.

The track is indeed magical, thanks to the mystical effect of ringing and rippling guitars. But the heavy bass pulse and neck-cracking drum beats make the song a serious head-mover, too. The riffing swirls to glorious heights and simmers like the mists of a dream, while the vocals add an element of vicious menace. In the last minute, the rhythm section break open like an extravagant storm as the guitars rise into the sky again. The entire experience is mesmerizing. 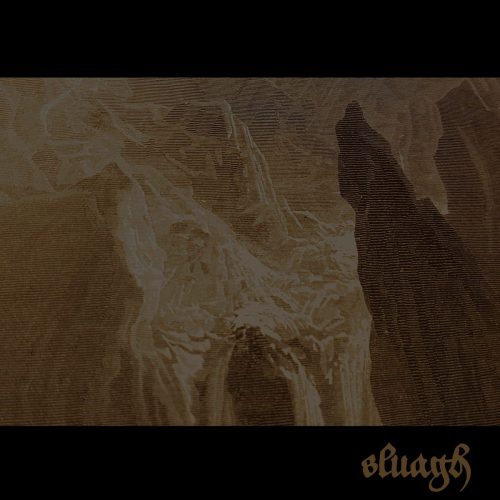 Sluagh are a Scottish band. The line-up includes members of other groups we’ve gratefully paid attention to: Haar, Barshasketh, Úir, and Of Spire & Throne. With antecedents such as those, is it any wonder that I was so eager to listen to Sluagh’s first album, Sluagh I? Expectations were high, and they were exceeded.

As opening tracks go, the first one here is shattering right from the opening seconds — an immediate tempest of frantic drumming, wild, tormented riffing, and absolutely unhinged howls, cries, and wails. I can’t emphasize enough how ravaging the pain in the vocals is, and how despairing the riffs are. The song boils with the fever of wretchedness brought into madness.

The intense moods of that electrifying opening song carry through into subsequent tracks, though Sluagh astutely introduce other elements, including reverent and majestic choral voices and melodies of equally magisterial sweep, arpeggios that ring with the ethereal tones of mystical incantations, ecstatically trilling and moodily meandering lead guitar, brazen chords that blare like grand fanfares, and enough shifting of gears in the usually rampant drumming to keep listeners on their toes.

Through these and other changes, the band create alterations of mood and atmosphere, and even of style (the leads in track IV have a bit of a post-punk feeling, and the same track includes abyssal growls). The music regularly reaches epic heights of almost overwhelming intensity, so all-encompassing of the senses that you can’t think of anything else. It spins and whirls with crazed abandon. And it descends into depths of hopeless grief.

The through-line of the album, as I hear it, is one of torment and tragedy, and from beginning to end, I found Sluagh I to be absolutely riveting. The new year is not even a week old yet, and with this record it has already delivered something spectacular.

Sluagh I was released on January 1, and it’s available on Bandcamp. Both Miloš and Rennie (starkweather) recommended this one to me. Thanks again guys! 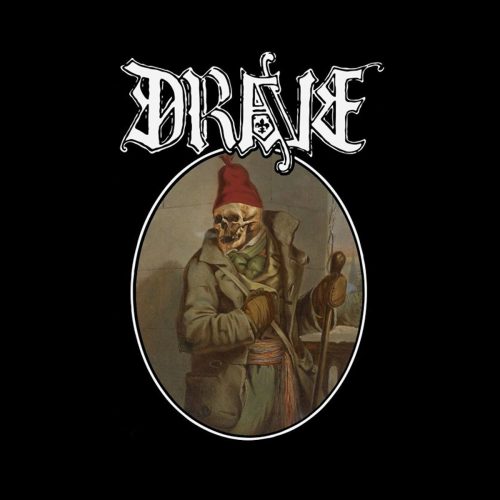 Drave is a new project by the Québec black metal musician Monarque, who has released nearly two-dozen records under both that name and Sanctuaire (among others). On Drave’s first release, Terroir, Monarque performs vocals, guitars, bass, keyboards, and violin. His guest Athros of Forteresse performed war drums and wooden spoons. Drave describes the music’s inspiration as “Québec history, the beauty and magic of its landscapes, and its folklore”. With respect to Terroir, the band provides this description:

“This first offering includes 2 original compositions singing about Québec’s resilience, interpreting its own version of the Chasse-Galerie folk tale (our Wild hunt) and ends with a Forteresse cover”.

Those two original songs do indeed seem to be soundtracks to a Wild Hunt, sweeping the listener up into the air and propelling us to glorious and unearthly heights. They’re explosive and mystical at the same time, surging full-throttle and with lunatic vocals at the helm, but with a fantastical feeling to the folk-influenced guitar and keyboard melodies. They release adrenaline in a flood, put your heart in your throat, and become entrancing too.

But the songs have other dimensions as well. When the pacing abates in “Le Démon Bleu et Blanc“, acoustic chords and flute-like tones carry the mind back to a much earlier age. And the blazing fiddle music that opens “La Débâcle” is absolutely diabolical — a wild hunt unto itself.

The Forteresse cover, “Une Nuit pour la Patrie“, begins with the sounds of night creatures, but soon rockets into the heavens. Very much in keeping with the original tracks, Drave‘s reimagining of the song creates a mythic experience that soars and sweeps with panoramic extravagance, sets the nerves on fire, and even gets the head rocking. But it’s a long (and very memorable) song, and so it undergoes changes, becoming stately and funereal, ominous as well as momentous, and haunting in its midnight, moon-lit reveries.

Terroir is… terrific. It was released on December 31st and is available digitally. The cassette tape edition is already sold out.

P.S.  The afore-mentioned Monarque (the musician’s eponymous project) also released a new album (Le Chant du Cercueil) on tape in late November. I’ve included a stream of one of the songs from that release just after the stream of Drave’s new record. And finally, if you’d like to learn more about La Chasse-galerie, go here.

(Thanks to Speelie for recommending Terroir.)