Well, my fine feathered fiends, here we go again: For the 11th straight year we present our list of the preceding year’s Most Infectious Extreme Metal Songs. Sunday might seem an odd time to begin the list, but I did say I was going to start the list this week, and the week is ending today, so here we are. There’s something else that’s odd about this Part 1, but I’ll get to that eventually.

I’m going to dispense with repeating the operative definition of what I think makes a song “infectious”; if you’re encountering this series for the first time, go here to see that. But I will remind you what I do to compile the list, and why I currently have no idea how long it will be or precisely when the rollout will end.

The universe of songs I’ve considered includes a list of candidates that I began at the start of 2019 and continued expanding as the year progressed. It also includes every suggestion made by our readers in response to my invitation, in the comments to this post. It may also includes recommendations from my colleague DGR; he’s the only staff writer who makes suggestions each year, but he hasn’t done that yet (though I believe he eventually will). When you add up my own ideas and those of readers, the universe of candidates includes 452 songs.

Interestingly, but not atypically, only 29 songs received more than one nomination, and only a small group of those got more than two mentions. So there’s obviously a tremendous amount of scatter in what people found most infectious in their playlists, but that’s a sign of just how vibrant and creative underground metal is these days, though it does make my job harder.

Now, to be clear, what I’ll be choosing in this list (as always) isn’t the result of a vote or any other kind of popularity contest. It’s my own personal list, and so only I can be blamed for any shortcomings. On the other hand, I do pay attention to all the suggestions, including the many songs in the universe of candidates that I didn’t manage to hear until I started working on this. And one other thing I try to do is provide genre diversity, so that the list becomes a way of summing up and remembering the year that’s just ended.

Finally, although you’ll see some “big names” represented on the list, and excerpts from some records that made a lot of year-end best-album lists, I’ve also made a conscious effort to recognize music from much more obscure artists and labels around the world, because our site has always been devoted to spreading the word about music that needs more recognition, more so than singing the praises of music that every other metal site in creation is already spotlighting.

And that brings me to the other oddity about this Part 1 of the list: It consists of two songs that were released on the last day of 2019, by two bands that most of you probably have never heard of. You might ask how two songs could be classed as Most Infectious when they’ve only been out in the world for a literal handful of days. A reasonable question, and my answer is that I’ve been going back to them more than once on every one of those days. But I’ll also admit that I enjoyed the idea of starting the list this year with some obscure names and some music that just barely escaped into the world before 2019 expired.

As for what songs will come after these two tracks, I have only a partially formed idea. Because the candidate list is so massive, and because I’m still only part-way through thinking things over, the list isn’t nearly complete at the moment — which is true every year when I begin the roll-out. That’s why I don’t know how long the list will be or precisely when it will end. I will post an installment every day or two, and eventually start including more than two songs in each installment in an effort to finish by no later than the end of February, though I will make myself stop by then even if I’m not really finished. If you lose interest before then, don’t bitch at me about how gigantic the list is becoming — just go read and listen to something else. 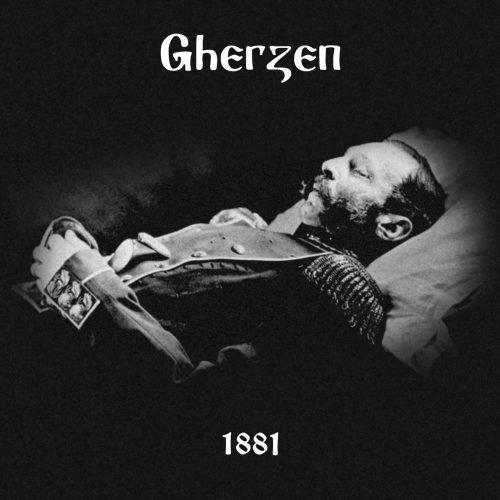 On March 13, 1881, Tsar Alexander II of Russia was assassinated in Saint Petersburg by Ignacy Hryniewiecki, a young member of the Narodnaya Volya (“People’s Will”) revolutionary movement, which was committed to acts of violence and terror in furtherance of its opposition to Tsarism. The successful killing of Alexander on March 13th wasn’t Narodnaya Volya‘s first attempt on his life. In fact, there were many of them. For example, according to The Font of All Human Knowledge:

“On the morning of 20 April 1879, Alexander was briskly walking towards the Square of the Guards Staff and faced Alexander Soloviev, a 33-year-old former student. Having seen a menacing revolver in his hands, the Emperor fled in a zigzag pattern. Soloviev fired five times but missed; he was hanged on 28 May, after being sentenced to death.”

I’ve recounted these pieces of history because the first song I’ve chosen for this list is the opening track from an album named 1881 by the Russian black metal band Gherzen, which they dedicate to Narodnaya Volya. As noted above, it was released on December 31st (by Der Schwarze Tod). On its cover is an image of Alexander II‘s body lying in state after the assassination

That opening track is named “Пять Выстрелов“, which translates as “Five Shots”, and I assume it refers to the unsuccessful attempt on the Tsar’s life by Alexander Soloviev in 1879. The rapidly rumbling double-bass and neck-cracking snare beat, combined with a fiery riff that picks up and intensifies the acoustic opening, set the hook damned fast. The song’s rhythmic drive changes repeatedly, but remains physically compulsive, while wildly flickering leads and a vocal tandem of scorching shrieks and guttural roars keep the heat quotient at a high boil.

The riffing creates a more dismal and despairing resonance as it changes, especially when the powerful rhythm section take a break, but the song’s energy and emotional power never flag. Even when the song slows, it’s highly contagious. The ringing guitar motif that surfaces at the 6:28 mark, and then continues to cycle to the end as the music’s propulsive momentum picks up again, is just as infectious as the opening riff — and maybe more so.

Man, I do love this song. The rest of the album is excellent too.

(My thanks to Miloš for making me aware of this album.)

The second song I’m naming to this list today is from an EP entitled Flétrissement (“Wilting”), which was released on December 31st by the Argentinian duo Uroboros (Ignacio Elías Rosner and Sebastian Ezequiel Ferreyra). Their page at Metal-Archives lists a dozen other releases dating back to 2012, including two albums, the most recent of which is 2018’s Le rose est le nouveau noir.

This new EP is based on Les Fleurs du mal (“The Flowers of Evil”), a controversial volume of French poetry by Charles Baudelaire that was first published in 1857. The initial publication of the book was arranged in six thematically segregated sections (and you’ll see that four of those appear as song titles in the EP):

A statement on the band’s Facebook page (translated here from the Spanish) explains that it was composed and recorded in one day, resulting in “a spontaneous experiment that ranges from sludge and black metal to drone and electronic music”.

The song I’ve chosen for this list, “Absente“, is the only track not named for one of the poetry volume’s sections. The guitar and bass distortion is immediately mutilating. The drum beats are hammer blows to the neck. But after 16 seconds of that you hear a slowly pulsing and slightly slithering riff that, when combined with those hammer blows, worms its way into the brain and takes up residence there.

Other things happen — crazed leads enter the frame; the band switch gears into a brutish pile-driving rhythm; the drummer erupts in clattering flurries; harsh, heartless bellowing joins in — but it’s that opening riff and crushing percussive accompaniment, which surface again, that keep pulling me back to this track.

It’s a small crime for me to pull this one song out of the EP, because the EP is really meant to be heard as a whole, in sequence (each track flows seamlessly into the next one). The music in the surrounding tracks can be quite different from this one (“Révolte” is more in line with “Absente”), but the EP as a whole is a fascinating experience that I recommend you dive into from the start.

(Thanks to Rennie [starkweather] for recommending this EP.)

One Response to “OUR LIST OF 2019’S MOST INFECTIOUS EXTREME METAL SONGS (PART 1): GHERZEN AND UROBOROS”