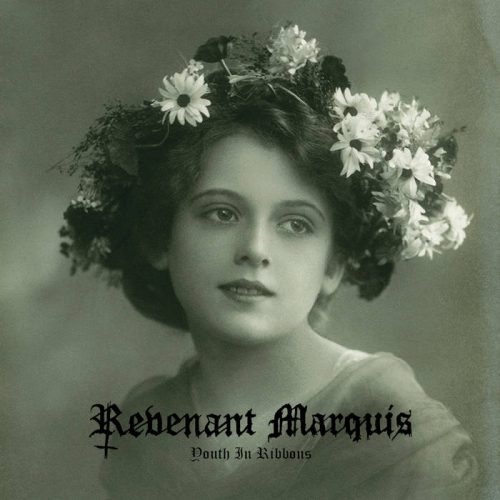 Youth In Ribbons, the new album by Revenant Marquis, is shrouded in mystery, not merely in the chilling sensations of its sounds but also in its inspirations. No less mysterious is the source of the music, a prolific yet anonymous Welsh musician, whose idiosyncratic creations confoundingly combine the mind-mutilating assaults of raw black metal with a certain style of wraithlike, hallucinatory melodicism that one might even call elegant. Images of a fine-fingered and well-dressed vampire come to mind, seductive in its allure but lethal in its promise.

When I first discovered the album I was struck by the photograph on its cover and by curiosity about what the album’s title might signify in the context of that image. As I wrote here, after listening to the first advance track, I had my own interpretation: The beauty, the innocence, the aspiration in that face, the brightening of the flowers — it’s as if the band were saying, “Here’s what you might have looked like when your dreams for the future were still bright, and now let us show you what life is really like”.

And hence, I thought of the album title as a reference to youth torn to ribbons, rather than adorned by them. 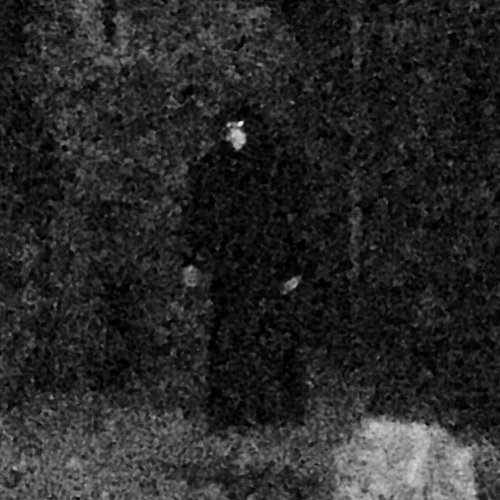 Having now spent time with the album as a whole, I’m not at all certain about that interpretation, though it might still be true. There are repeated references to the young in the song titles, and the music often seems to channel torment and tragedy, neglect and abuse. Yet as noted above, there is also something profoundly un-real about the music, which seems the stuff of disturbing dreams, or the habitations of specters — spirits that are lost and lamenting, or evil and vicious.

I try to avoid track-by-track reviews for fear of inducing tedium, but here I decided to make an exception, if for no other reason than to share some of my own research and speculation about the song titles (I’ve been given no direct insights about them, through the promotional material).

No research was necessary to understand the name of the opening track, “Menstruation”, though I have no idea about the significance of the title in the context of the album. There are no words — it functions as a ghostly overture, which combines slow drum beats, haunting keyboard ambience, ringing chords, and crashing cymbals. The effect is ominous and chilling, and thus sets an appropriate tone for what is to come.

And what comes next is “Ephebiphobia”, a term that refers to “the fear of youth” — not the fears experienced by children and adolescents, but the fear of them by adults. The music is apocalyptic — a dense, devouring cyclone of sound. The rolling drum cannonades sound like massed artillery. The guitars generate a wall of harsh sound. The guitar leads slowly slither and squirm, in contrast to the roaring thunder around them, and they sound diseased, demented, despairing — and somehow, seductive. The vocals are shrieking infernos and wailing poltergeists. And, for such abrasive music, the song proves to be mesmerizing.

To facilitate some insight into “Ephebophilic Wraith”, I’ll tell you that “ephebophilic” refers to a sexual interest in mid-to-late adolescents, generally ages 15 to 19 — in other words, a pronounced preference for sexual partners of such ages. In its music, the song is similar to “Ephebiphobia “, but the cyclonic assaults are interspersed with boisterous rocking drum rhythms and guitar leads that veer from searing ecstasy to feelings of desperation and anguish. As forecast earlier, there is also a dreaminess to the music despite its thunderous and tormented qualities.

In “Grave Lit Transmogrification”, generally slower drum rhythms are intermixed with violent outbursts and booming progressions, and weird and wraithlike leads create an exotic yet frightening aura. Altogether it is the soundtrack to a fiendish seduction, and ends in eerie ambient tones that are more sepulchral and frightening still.

As far as I can tell, “Ysgol” seems to be the Welsh word for a school. It too is a storm of sound but also hybridized with bounding cadences and riffing that seems to whirl and dance — and with wretchedly morose vocals, to go along with the more typical wild shrieks and cries.

“The Blood of Lady Tasker” is another instrumental, one whose title makes reference to a person my researches haven’t succeeded in identifying. It delivers rapid yet ritualistic drum rhythms paired with a moody and mystical melody, the guitar notes expressed in slow, shining reverberations that are hypnotic in their effect.

Influenced by its title, I thought that “The Blood of Lady Tasker” was perhaps intended to create a picture of slow exsanguination, because that’s what it sounds like, but “The Bones of Lady Tasker” is a picture of tumult conjoined with grief, of battering drums and beleaguered melody that still somehow sounds otherworldly. As the drumming vanishes, the music becomes truly apparitional.

My googling tells me that Tasker-Milward was a secondary school in Wales, which succeeded two much older schools and for a time in 2013 seems to have become the source of controversy for its policy toward the discussion of homosexuality. As for the song “Taskermilward”, big head-moving drum beats and slashing cymbals anchor yet another mystical and mercurial melody, which rises into wails when the percussion becomes an obliterating war zone.

The titles of the final two songs don’t seem to refer to actual events or personages, but of course that doesn’t mean there isn’t some real-world inspiration. In “The Incorporeal Hallways”, a slow, queasy and discomfiting guitar melody is soon joined by a storming assault of dense sound. Feverish leads can be detected within the paroxysm, and the arpeggios become even more freakishly demented, but of course they are no more demented than the utterly crazed vocals.

As for the closer, “Propagator of an Unspeakable Incestuous Coven”, slow drum beats and slithering guitar abrasion provide an introduction that quickly creates a feeling of degradation and misery, and slowly wailing leads enhance the music’s atmosphere of sorcery and sorrow. One might say the album as a whole is often a chilling hallucinatory experience, but the closing song certainly is that. Yet as the weird and weeping leads cycle through the track, it becomes eerily mesmerizing — which is also true of the album as a whole.

Youth In Ribbons proves to be deeply unsettling but also fascinating in its combinations of sensations, and ultimately it’s as enthralling as it is uncomfortable. 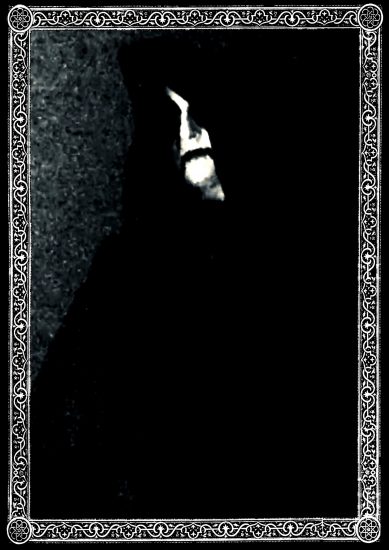 The Lithuanian label Inferna Profundus Records and the UK label Death Kvlt Productions will release Youth In Ribbons on January 20. It is Revenant Marquis‘ fourth album since 2018.

5 Responses to “AN NCS ALBUM PREMIERE (AND A REVIEW): REVENANT MARQUIS — “YOUTH IN RIBBONS””