(Comrade Aleks has brought us this interview with Make Mäkinen, one of the guitarists and songwriters of the Finnish band Rottendawn. whose debut album is out now on the Saturnal Records label.)

Even though Rottendawn was lit in 2010, their first album Occult saw the light of day in September 2019 on Helsinki-based Saturnal Records. This death-doom band’s lineup is highly remarkable, but I have an impression that they don’t care about promotion too much. So you should know what Rottendawn is a brainchild of Pasi Äijö from Unholy (bass, vocals), Mikael “Arkki” Arnkil of Impaled Nazarene (drums), Sinisthra’s Make Mäkinen (guitars), and Joni Halmetoja (guitars) from… from… I don’t know where he came from. Why not find it out? I

welcome all fans of things heavy, distorted, and slow to join us in this compact and informative interview with Make Mäkinen.

Hail Make! Several months have passed since the release of the Occult album. Have you watched for feedback? How have people reacted to it?

Sure we do. It’s been a bit varied.. Mostly it’s been positive, which is nice. There are also some negative reviews, and that’s okay too. We are here to torment, not to please 🙂 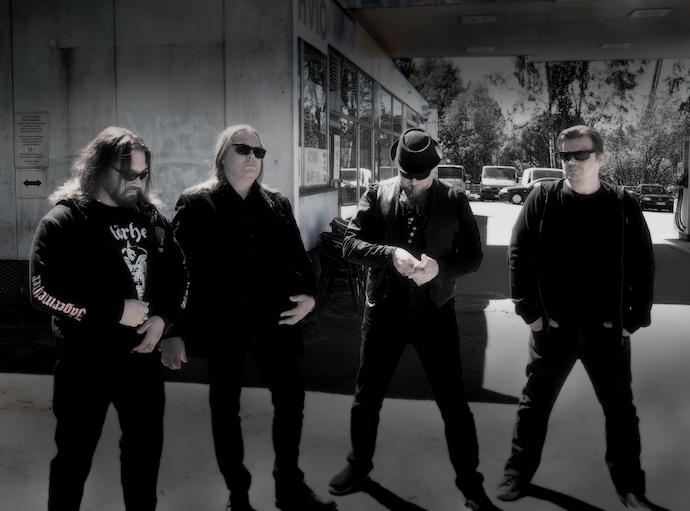 It’s said Rottendawn was started in 2010. How was the foundation laid for the band? Was the current lineup set back then?

The current and final lineup was set in 2017, or was it 2018? Anyway, before that it was just Joni and me, basically sharing ideas and trying to figure out what to do with them. Just nursing the idea of the band. Then I met Pasi and things started to get some sort of shape. Actually we had another drummer for a while but that didn’t really work out the way we wanted.  Then I bumped into Arkki, at a local home appliance store. We talked briefly and things started to happen. Arkki and me, we started Sinisthra together. We had a good start but then life happened and we went in different directions. Now he is back and it’s great to work with him again.

I’m talking about Rottendawn as a band, but how do you see it yourself? Band or studio project? I didn’t see any gig announcements. Do you want to perform Occult live?

We are a band. Most definitely. We really want to do gigs but we have been in a situation where gigs have not been possible, for several reasons. But as I said, we are looking forward to playing some gigs.

Pasi played in Unholy, Mikael remains in Impaled Nazarene, and you, as I understand, are in the gothic band Sinisthra. What about Joni? What’s his musical background?

Joni used to be a singer in a band called Legacy back in the day. For years he had other interests along with music and didn’t have the time he felt he needed to be active, but he never did quit playing guitar and writing up ideas, so here we are.

Make, so three men have doom, black, and gothic backgrounds, and one might expect from Rottedawn an amalgam of these genres. Yet Occult represents solid death doom material in a classic vein and with a modern approach. Do all the members offer ideas on equal terms or do you have a mastermind behind it?

First of all, Sinisthra has nothing to do with that goth scene. Just wanted to make that clear.  Anyway, everybody in the band does offer ideas and we are equal in that sense. Naturally, Occult is more biased on ideas that came from Joni and me. The future material will contain more material from everyone. Arkki is a good and seasoned composer and has great ideas. And it goes without saying, Pasi sure knows how to summon a good song.

Well, you don’t need to be a PhD to get that Rottendawn’s texts deal with things obscure and wicked. But there’s one song with Finnish lyrics ‘Et voi taas kuollakaan’, so… what’s it all about? How much of the “Occult” is in these songs?

Roughly translated it’s “You can’t just die again”, and as far as I understand any of it, it’s about the situation where one does want to get out of it all, but there is nowhere to go.. What can you do?  You just can’t curl up and die again. Can you?  By the way, I’m glad you didn’t ask about the title track — nobody really knows what that’s about. 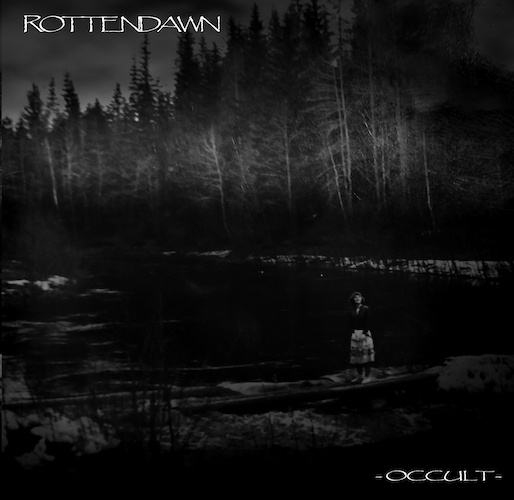 Make, how do you see the connection of the album’s artwork with the songs’ lyrics?

That girl in the photo is my mother. The picture was taken back in early ’60s.  This bloody photo has always made me feel uneasy, creepy as hell. I thought it would go well with this album and decided to finally use it. When I asked if it’s ok to use the picture, she told me what that photo is about. That river bank is a murder scene. The dead body of a young girl was found right there where she stands. The case remains unsolved. It became a popular thing for kids to go there and have a photo of yourself made. Bizarre.

Occult shows some modest diversity considering the compositions. For example, the blackened start of ‘The Final Lament’ or the breathtaking melodic solo in ‘Burn ’til Burial’. How did you shape the songs? Did you have a plan before entering the studio?

We didn’t really have a plan, we just started to record. Actually we had only 1 or 2 songs completeted when we started to record. We just went head first and started to experiment. Surely we had lots of tested ideas and a basic sketch for almost every song, but basically we just went with the flow.  We also had some basic ideas of the sound we were after.

First we ditched all the click tracks and refused to edit or fix the  drum tracks, or anything else for that matter, just to make it “breathe” and sound natural. We wanted it to sound like there are actual humans who play music together and not quantize everything perfectly on a grid. 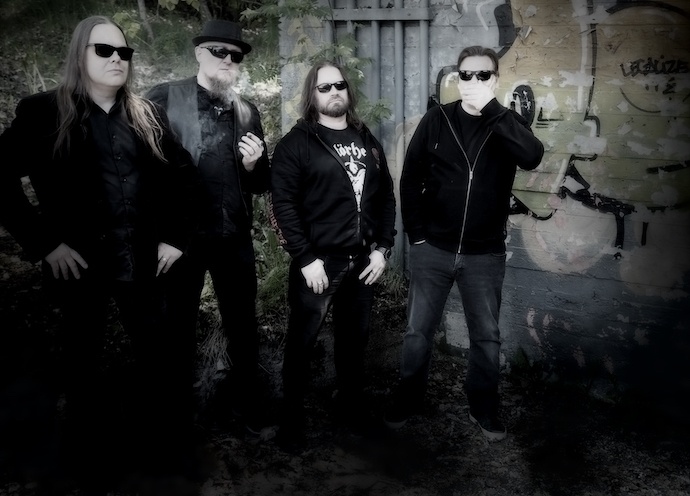 By the way, where and in what conditions did you record the album?

It’s recorded in our rehearsal room. In very strange conditions indeed. We desided to go totally DIY. We built a small studio in our rehearsal space, very modest. Just the gear we absolutely needed.  It was fun and it was pure hell.

What’s your next step as Rottendawn? Do you plan to strike while the iron is hot or will you just wait for an inspiration before your next visit to the studio?

We have a couple of songs ready and we are sharing ideas for more to come. This time our intention is to have the songs more “ready” before rushing into the studio, but we’ll see… So I’d say we’ll continue making music and do some gigs in the future if someone wants to have us. Festivals, take that as an offer!