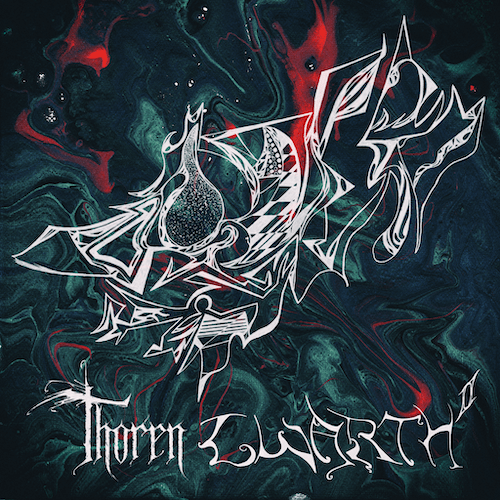 Hold onto your heads. You might want to use both hands, and possibly tether it to your torso with bungee cords too — because otherwise the song we’re about to present could spin it clean off and spiral it up into the stratosphere like one of these things, except moving about 10 times faster.

“Egladhrim” has no vocals, and once you hear it the reason is obvious: A normal human voice couldn’t possibly keep up with the rocketing pace of the music, nor contort vowels or syllables in a way that would match the blinding exuberance and mercurial morphing of the music. It’s difficult enough to imagine that human beings are performing the instruments — easier to imagine the sudden appearance overhead of an alien hive swarm furiously constructing a devilishly intricate device that, when ready, will burn a hole straight through the planet.

But we’re assured that the music is indeed the creation of humans, despite all outward evidence, and they’ve chosen the name Thoren — a name that will surely be familiar to many of you as a result of their first two albums, Brennenburg (2016) and Gwarth I (2018). Their latest full-length, which is home to this track we’re premiering today, is Gwarth II, and it will be released by Drylands Records on February 7th.

As on the last album, Thoren‘s core members Anthony Lipari (guitarist and main songwriter) and Joseph Paquette (bass) are again joined on the new one by a pair of über-talented drummers, Alex Cohen (ex-Pyrrhon, ex-Imperial Triumphant, and a live performer with Malignancy) and Kenny Grohowski (Imperial Triumphant, Secret Chief 3). The drummers trade off among the tracks, and it’s Alex Cohen‘s performance you’ll hear on “Egladhrim“.

The song really is an extraordinary head-spinner. The virtuosity of the performances, across the board, is eye-popping, as are the too-many-to-count twists and turns, which are executed with surgical precision. It’s a non-stop thrill-ride, and creates so much sensory overload that it takes way more than one listen to un-pack everything that happens.

But in addition to the nova-like energy and the impressiveness of the technical execution, the song stands out because of how well-connected everything is by recurring motifs — highly accelerated scissoring riffs, brutally bludgeoning grooves, shrieks and swirls of delirious dissonance, moodily noodling bass patterns, and bursts of explosive drum mania. These things flash by like speeding bullets, but the listener’s brain recognizes them when they reappear, even if you can’t hold onto them for more than a second or two at a time.

What a wild and glorious ride this is! And it’s just one excerpt from a persistently wild and glorious album, which doesn’t wear out its welcome despite how brazenly the music challenges the listener’s ability to keep up and make sense of what’s happening, and to hold on to a semblance of sanity.

Pre-order via the link below, and also check out the previously released opening track “Gwarth“, along with today’s premiere.