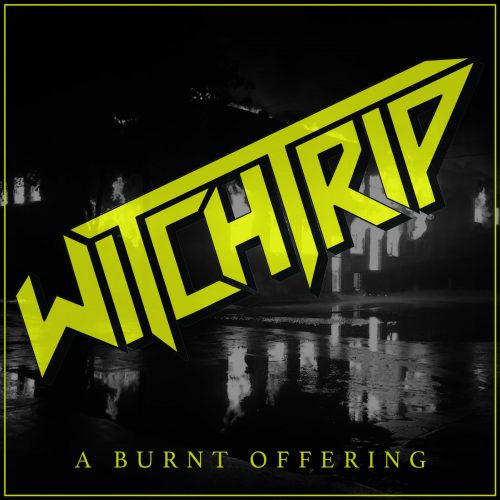 During the early morning hours of July 23, 2019, a fiery inferno engulfed and consumed a warehouse on Jarvis Avenue in Winnipeg, Canada. By the time the sun rose that day, according to this report, there was nothing left of the building but some skeletal exterior walls. The flames devastated more than the structure itself. The three-story warehouse had been home to the work of some of the city’s most distinguished artists, and it also housed the jam space of Witchtrip, a metal band whose membership significantly overlaps with Occvlt Hand and whose debut EP (Cosmic Cauldron) we premiered in 2018. Lost in that conflagration were thousands of dollars of the band’s instruments, gear, band merchandise, and other possessions, all of it uninsured.

Sometimes even disasters like that one have a silver lining, and in this instance it spurred Witchtrip to record a new two-track EP, their first music to be released since Cosmic Cauldron, as a means of trying to raise money to replace what they lost. Fittingly, and perhaps with a rueful smile, Witchtrip named the EP A Burnt Offering, and we’re premiering it today in advance of its official release on February 1st. 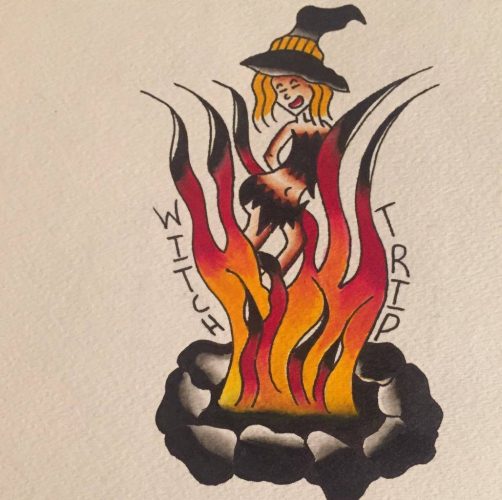 When we premiered the band’s first EP, we characterized the songs as “heavy, dark, and powerfully addictive” — “massive, lumbering monsters, deploying the kind of rumbling, chugging riffs and skull-cracking drum rhythms that produce reflexive head movement”. If you were looking for a genre label, you might have contemplated a variant of stoner doom, but that certainly wasn’t an exact fit — and it’s not a tight fit for these two new songs either.

“Ragnar’ Roll” is a big, skull-thumping, hard-rocking beast, with riffing that pulses with sinister intent and writhes with reptilian menace. The vocals, as before, are the kind of flesh-eating venom that wouldn’t be out of place in a black metal band. The music has the kind of rhythmic momentum that’s capable not just of getting your head banging but of bending you back and forth at the waist.

“The Holy Crow” is also anchored by lead-weighted bass lines and booming drumwork, but initially proceeds at a slower pace, with a gloomier atmosphere. But it accelerates as the drumming becomes more vibrant, the guitar sends off flares of extravagant yet eerie melody, and the vocals erupt in scalding savagery. There’s a rapidly scissoring quality to some of the riffing, but also a woozy, narcotic quality to the music. When the band settle back into a slower cadence, the music grows more ominous and occult, and seems to slowly slither like a big demon python.

Even though recovery from a disaster may have been the prime motivation for these two hellishly good new songs, we’re damned happy to have them, and to share them with you — and hope for more soon.

Witchtrip extend their thanks to local Winnipeg recording engineer Jordan Voth, who graciously offered to record A Burnt Offering to help the band raise funds toward acquiring new gear. If you like what you hear, show these lads some support with your money by acquiring the new EP. And if you’re in the vicinity of Winnipeg, turn out for Witchtrip‘s show tomorrow night (January 25th) at the Windsor with Votov, Kratom, and Inhumed.