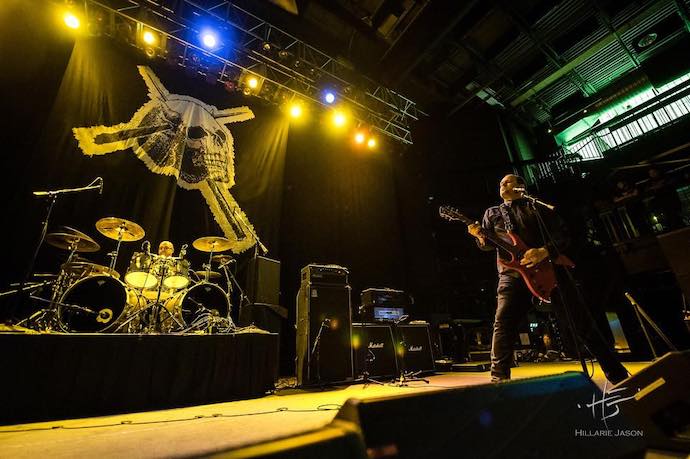 (Comrade Aleks decided to embalm himself in the fluids of true death, interviewing Ghoat of Encoffination, whose latest monstrous album was released last year by Selfmadegod Records.)

Encoffination have provided their post-mortem practices between locations in Atlanta and San Diego for about 12 years. Ghoat (guitars, bass, vocals) and Elektrokutioner (drums) were involved in a crazy number of extreme metal band, and even their approach to death-doom reflects a brutal, macabre, and uncompromising approach.

I appreciate the album titles they have used — Ritual Ascension Beyond Flesh (2010), O’ Hell, Shine in Thy Whited Sepulchres (2011), III – Hear Me, O’ Death (Sing Thou Wretched Choirs) (2014), and now We Proclaim Your Death, O’ Lord (2019). Everything and more was released by Selfmadegod Records… Here’s a fleeting glimpse into the sepulchral world of Encoffination, with Ghoat.

Hi Ghoat! Encoffination’s career  isn’t that long but seems to be really saturated, according to the band’s discography. So let’s run through it, okay? You founded the band with Elektrokutioner in 2008, and since then it has remained a duo. Was it your plan from the start to perform such bloody death-doom with only two people in the band?

Yes. He and I wanted it to be simple. Just heavy guitars, drums, and vocals. 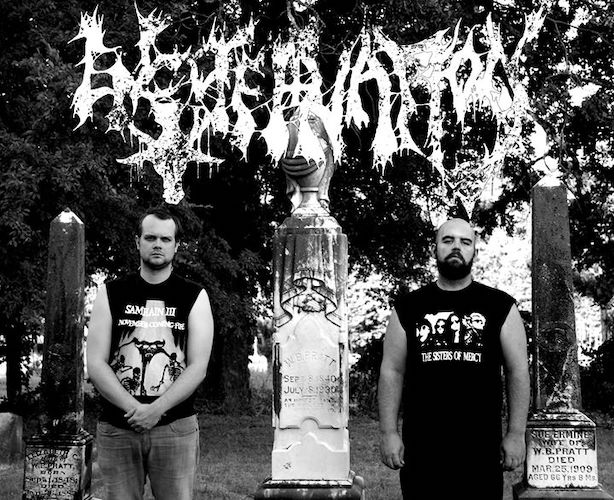 Two years passed after the founding, and Encoffination recorded the Temples Descend Below The Earth EP. Did you feel it was time to set a direction for the band’s future releases with this recording? How serious were you in working on this material?

From the beginning the band started just as an outlet for heavy, slow doom riffs that did not fit in our other bands. Those two songs were actually recorded at our very first rehearsal.

Ritual Ascension Beyond Flesh was born the same year (2010). What do you remember of this recording session?

We recorded the first songs (on Temples Descend…) together in our rehearsal space, but we did the album by long distance. The drums were recorded first and sent to me, and the guitars were added next. We recorded in our own home studios alone.

Encoffination is a very productive band, so it could cost a lot to record everything in a real studio. How often have you recorded in studios? Or do you work only in home studios? How are they equipped?

We only work in our own home studios. We do everything ourselves. Both are simple, with multitrack recorders that go into our computers for mixing.

There are a lot of death metal bands in the US, and I bet that death metal fans were more into your stuff than most of the doomheads. How do you determine your belonging? Is it about death, or doom? Do you care?

I have always considered us a death metal band foremost. It ultimately does not matter, I guess, but I prefer being death metal, just slower.

Did Ritual Ascension Beyond Flesh draw people’s attention to Encoffination back then? Did you get the feedback you expected?

Yes, the feedback was good and quite unexpected. I guess at the time we were doing something pretty obscure, mixing death metal with slow and oppressive doom.

Another EP, Seventh Temple of Laodicean Scripture, appeared in 2010, and then the Amen EP, a split with Grave Upheaval, and the full-length album O’ Hell, Shine in Thy Whited Sepulchres, which saw the light of day in 2011. Do you feel you kept a good balance of quality and quantity?

I would like to think so. I like to be very deliberate in what Encoffination releases, and not just out stuff that’s half-assed. 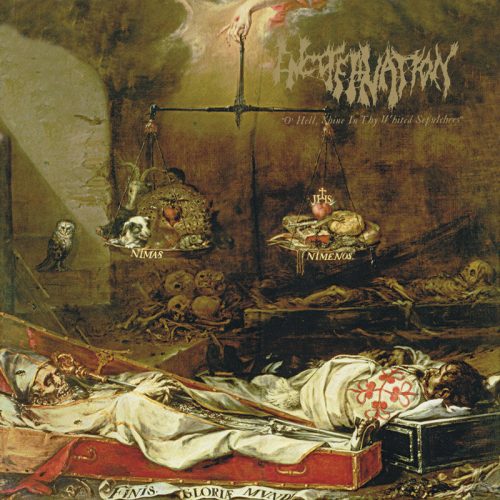 How do you see the strong and weak sides of O’ Hell, Shine In Thy Whited Sepulchres? Did you feel you get good recognition with this release?

I feel like this release was a huge step forward with our songwriting and balance. Yes, I was very pleased with how it was welcomed. I think it really put us in front of more people.

You run a lot of bands at the same time, and all of them perform in different extreme metal genres. It seems you work on it in a 24/7 regime. How do you manage to live that way? How do you find time for family?

It’s hard at times, but in the last few years music has taken a backseat to my day-job and family life, absolutely. The only two bands that really demand a lot of attention are Encoffination and Father Befouled, and I balance them in what little spare time I can manage.

All of your bands deal with all sorts of macabre themes in their lyrics. What drives you to approach themes like these?

I have always been attracted to the morbid and morose. Themes of death and destruction are all around us everyday, you just have to notice it.

Do you ever feel a creative crisis or suffer from lack of ideas? I believe it’s hard to write such lyrics without self-repeating.

No, when the time is right, the ideas will present themselves. I do not try and force them out. I see inspiration in all kinds of places, sometimes from where I will least expect it. I keep notes around when something pops in my head so I can write it down and not forget it.

You also do artworks for bands playing different sorts of extreme metal, and you’re pretty productive here too. Do you offer your original works or do you usually discuss with the bands what kind of images they want to see on their albums?

I tend to work from my own ideas and psyche, and if they like it, good. I am not an artist in the classical sense (I do not typically draw or paint), I prefer to make collage and image-manipulation artworks, and sometimes it is hard to meet someone’s expectations or requests.

You tend to poetic titles, and the name of third album, III – Hear Me, O’ Death (Sing Thou Wretched Choirs), isn’t an exception. What role does the band’s image play in its life?

Encoffination revolves purely around the worship and illumination of death. 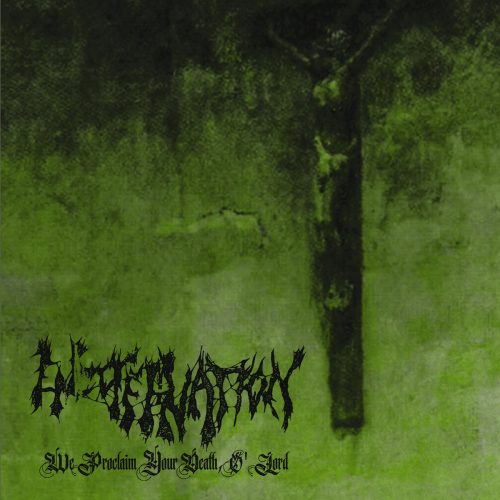 There were five years between  III – Hear Me, O’ Death (Sing Thou Wretched Choirs) and We Proclaim Your Death, O’ Lord. What slowed you down?

Did you see this material as the next level for you, considering the songwriting and sound producing?

I want Encoffination to progress, but only inside our own bubble. To see expanding and evolving as the same idea.

Taking into account your business with other bands, how do you organise touring schedules? And how regularly do you play with Encoffination?

Touring is very hard because of my personal life. We do not play much. A few times a year at most. We did a short European tour last year. I would rather play important, memorable gigs rather than just play all the time for no reason. I do not do music to make money or support myself, it is purely for the love of the sound.

Encoffination – Crypt Of His Communal Devourment

How do you see the band’s prospects in the American scene? And where do you have more support — in the US or in the Old World?

That’s hard to say. But I will say that our visit to Europe last year was amazing. The support there was phenomenal.

You tightly collaborate with the Polish label Selfmadegod Records. How did you build your relationships with them?

They approached us at the very beginning based on hearing our first 7” and we have been with them ever since. SMG is great, I have no intention of ever going elsewhere.

Encoffination’s most up-to-date album, We Proclaim Your Death, O’ Lord, was released in May 2019. Do you see this album as the most precise embodiment of your vision for Encoffination?

I would say so. I wanted it to reflect a little more of our live sound. Heavy, slow, nasty… not as much texture. On record there are multiple guitars, bass, and keys, but live it is just two of us. So I wanted it to balance that out.

How would you compare this album with the debut? How far are you now from Ritual Ascension Beyond Flesh?

I would say it is definitely a vast difference. There was not a lot of thought put into those first songs. That record is murky and abysmal, which I like, but we have evolved past that.

How would you sum up Encoffination’s ultimate message?