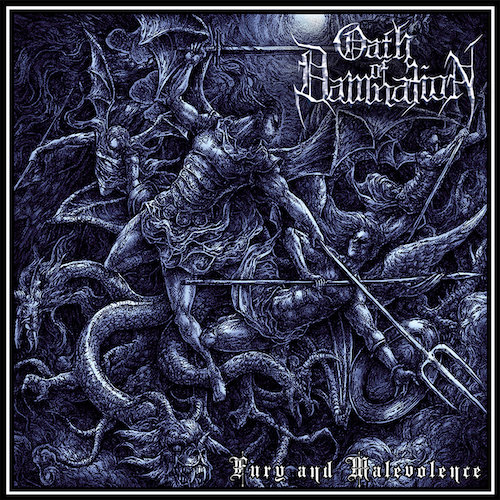 On March 13th the Australian blackened death metal devastators Oath of Damnation will return to the battlefield with their second album, the well-named Fury and Malevolence. Gore House Productions will be the bearer of these seven tracks of unchained ferocity and pitch-black darkness, and we’re in the fortunate position of presenting the first publicly revealed track from the album today through a lyric video.

Entitled “I Curse Thee, O Lord!“, it’s the song that ends the album. As the band tell us, and as you’ll discover through the video, the track delivers “unrelenting savagery paired with a twist on the classical biblical tale of Abraham commanded by his god to sacrifice unto him, his son, Isaac. Unlike in the classic tale, here, no angels come to stay his hand. Press play and destroy!” 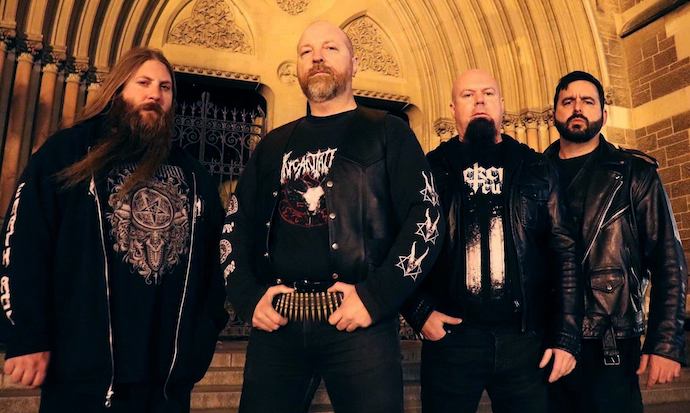 As promised, “I Curse Thee, O Lord!” does indeed destroy. But it’s a vibrantly dynamic affair that’s packed with changing moods, changing tempos, changing vocals, and a multitude of instrumental techniques, all integrated to create fear and ferocity, and terrible grandeur.

Suitably introduced (given its subject matter) by booming chords, neck-snapping snare drums, turbocharged double-bass, and the shine of celestial keyboards overhead, the song soon erupts in an all-out assault of obliterating blast-beats, vicious, hornet-swarm riffing, and blood-freezing demonic shrieking. That display of savage cruelty transforms into beserker frenzies, thanks to electrifying displays of insectile fretwork and fast-galloping percussion.

The song’s grandiose opening segment reappears, but the band also continually engage in further adrenaline-fueled escapades of head-spinning guitar work, while also administering brutalizing jackhammer blows to the listener’s cranium and introducing deep, macabre bellows and horrid roars in tandem with those terrifying shrieks. And as if all that weren’t exciting enough, the song includes a spectacular guitar solo.

For just one song, it’s an eye-popping thrill-ride, both eerily majestic and utterly hellish, both atmospheric and barbaric. And there are a lot more thrills awaiting you in this album’s remaining well-told tales of darkness, horror, and ancient mythologies. 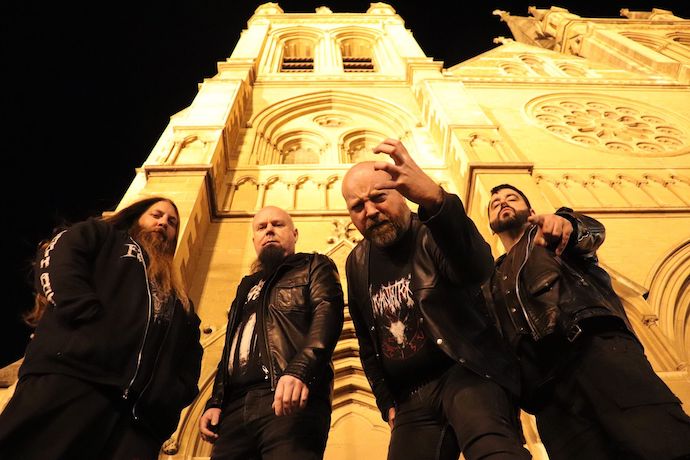 The eye-catching cover art for Fury and Malevolence, which is used to excellent effect in the lyric video, was created by Jenglot Hitam. The album was recorded, mixed, and mastered by Andy Kite (Hidden Intent, Meth Leppard, Splatterpuss) at Against the Grain Studio in Adelaide, Australia.

Gore House Productions will release the album on CD, cassette tape, and digitally, and recommends it for fans of early Dimmu Borgir, Old Man’s Child, Graveworm, and more. It’s available for pre-order now: