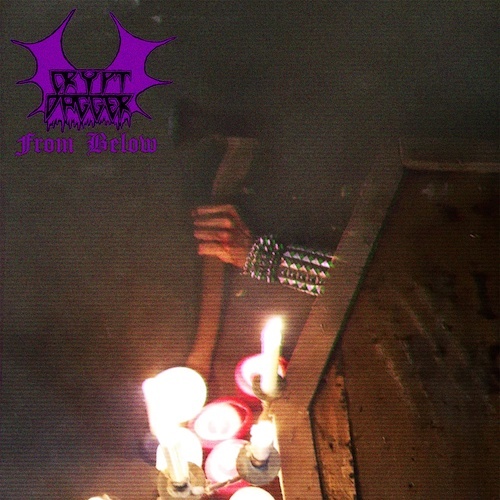 It didn’t take long for Germany’s Crypt Dagger to rip their way into the consciousness of certain segments of the underground (the crevices inhabited by denizens who like their music blasphemous, belligerent, and brazen). They detonated a two-song demo last year and then soon followed that with the four-track EP Tales of Torment, which one publicist has aptly characterized as “filth-banging, black-as-pitch SPEED METAL with a heavy debt to punk, as well as such surprising influences as Devo, The Mummies, and early B-52s“.

Wasting no time in building on the nasty impressions made by that EP, Crypt Dagger have brewed up a new eight-song inferno entitled From Below, which will be released by Dying Victims Productions on March 27th. It includes those four tracks from Tales of Torment plus three brand new onslaughts, and a cover of Dead Moon‘s “5440 or Fight”, adding up to 24 minutes of mayhem.

Today we’re premiering a lyric video for one of the new songs, the one that indelicately opens the new release: “The God Fukk You“. 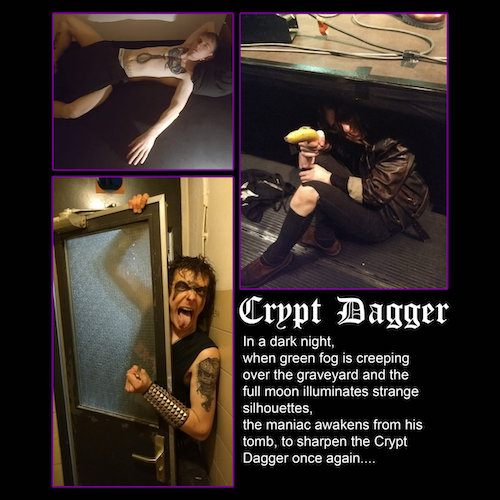 Crypt Dagger don’t mince words on this new song, and those words are delivered in a raw and rude red-throated howl that would unmistakably channel a fuck-you attitude even if vocalist/guitarist Poser Disposer didn’t actually yell “FUCK YOU”. With an ominous and devilish intro fashioned from symphonic strings and horns, and moaning bass notes, the song is then book-ended by ghastly, groaning chords and a dismal, dirgelike rhythm. But in between those gruesome graveyard maneuverings, the trio deliver adrenaline-fueled hellfire, a racing and ripping, punk-fueled attack that finds that sweet spot where speed metal and thrash intersect with first-wave black metal. It gets the blood boiling and the head moving in a hurry.

Dying Victims Productions will release From Below on 12” vinyl (two different versions) and digital formats. For more details about these offerings and to place your orders, check the following links.

P.S. We’re including a stream of the previously released track “Devastation” along with the video for “The God Fukk You“.