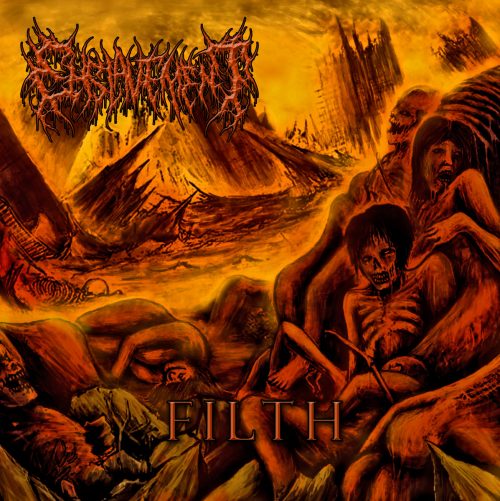 (Here’s another one of Andy Synn‘s tripartite review columns devoted to recent releases by bands from the Emerald Isles.)

I’m sure I had some sort of cool, edgy, non sequitur of an intro in mind when I first started thinking about this column… but burn my eyes if I can remember what it was.

So let’s just get right down to it, shall we?

Here are three fine-fettered examples of “the Best of British” that I think you’ll all enjoy, two of which are actually only just being released today! 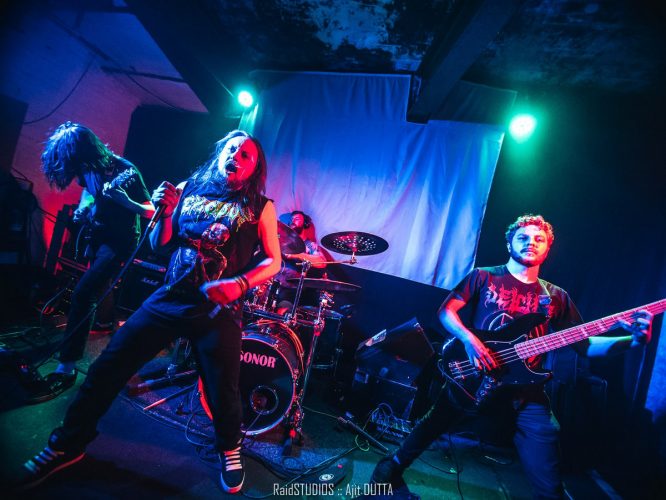 Funny story, I was actually meant to play a show with these guys last year at the Brighton stop on our tour with Hour of Penance, but sadly they were forced to pull out at the last minute.

Still, this nine-track slab of brutality goes some way towards making up for that unfortunate turn of events.

For ease of reference, think bands like Blood Red Throne, Suffocation, and Disentomb, and you’re going to be in the right sort of ballpark (and right sort of mind-frame) to properly enjoy this album.

And while I’m not saying that Enslavement are quite on the same level as those bands just yet, they’re clearly well on their way and demonstrate an impressive knack for staying unrelentingly heavy while also keeping things dynamic enough to prevent the listener from becoming stupefied by brutality (which, guys, if you’re reading this, you’re welcome to use as a future song title).

Simply put, there’s not a bad track on this album, although some certainly stand out a little more than others. These heavyweight highlights include riff-tastic second track “Lesion”, impressively intense (yet still surprisingly hooky) first single “Extermination” (which, if you don’t mind me saying, probably should have been the album opener), and the discord-drenched chugathon of “Sculpted from Filth” (which might just be my favourite track)… although, the more I think about it, the entire middle section of the album, including the frantic “Penitent” (another contender for “best track on the album”) and the oddly anthemic “Seduce, Sedate, Eviscerate”, is just one steady string of killer cuts.

Of course, the caveat of this is that the climactic pairing of “Human Osteoclast” and “Faecal Matter Consumption” is a little bit of a let-down in comparison to the stellar run of sonic nastiness which preceded it, but all this really means is that the band are the victims of their own success.

Mark my words, if they keep this up, and really double-down on what makes the middle part of the album so great, I could see Enslavement becoming a firm fan-favourite, not just here in the UK, but in the wider world of Death Metal. 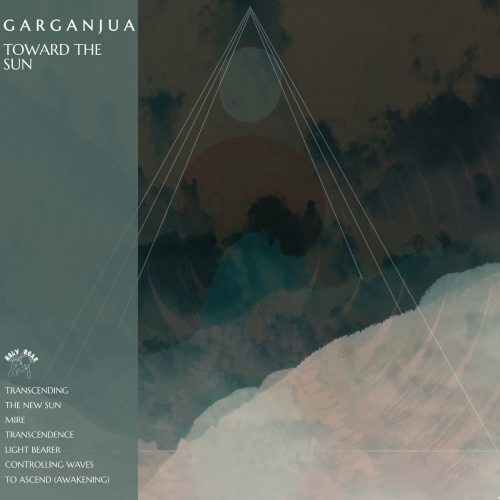 This is far from the first time I’ve written about Garganjua here at NCS. As a matter of fact I’ve covered both of their previous albums in pretty glowing detail. So it was an absolute no-brainer for me to pick out their recently-released third record, Toward the Sun, which came out just last month on much-beloved UK label Holy Roar.

One of the first things you’ll notice (once slightly pretentious, but undeniably effective intro track “Transcending” is through setting the scene) is that this time around the band’s doomier tendencies have evolved to embrace a more pensive, Post-Metal-esque approach.

It’s a subtle, but notable, shift in style, not to mention a very smart move by the Leicester quartet, as it allows them to neatly sidestep any potential issues of creative repetition or diminishing returns by exploring a new, albeit complementary, direction while still staying true to their roots.

That last part in particular will be especially important to the band’s long-time listeners, as while there’s undeniably a greater emphasis on mood and atmosphere (and crystal-clear, clean-sung melody) this time around, the band haven’t lost their love of “the riff”, nor their ability to switch on the heaviness when the moment calls for it, whether it’s the red-line intensity and snarling venom that rears its head during the second half of “Mire”, or the light and shade interplay of melodic melancholy and gravel-throated grit which makes up the majority of the fantastic “Light Bearer”.

The album’s best tracks, however, are the ones which perhaps sound the least like their previous work. “The New Sun”, for example, is just under nine minutes of proggy, doom-tinged Post-Metal magic which reminds me of the very best moments from Dvne’s outstanding Asheran, while sublime closer “To Ascend (Awakening)” strongly recalls the fluid musical and emotional dynamics of last year’s underrated (and similarly Devin Townsend-esque) Kindred Spirits by Arctic Sleep.

Now, anyone who knows me will know how highly I regard both these artists/albums, and should rightly conclude that I don’t make these comparisons lightly. Both these tracks (and the album as a whole, really) possess a richness and a resonance that’s hard to find and even harder to achieve.

But… I can’t deny that they do also make me think of other artists before they make me think Garganjua. It’s certainly a conundrum, and one which may take some time to fully work itself out.

That being said, I can see why a lot of people have (perhaps a little pre-emptively) been declaring this their “album of the year”. It’s a gorgeous, engrossing piece of work from start to finish. And while my own reactions may have been a little more tempered and reserved, I honestly wouldn’t be surprised (or at all disappointed) if this does make an appearance on quite a few End of the Year lists come December. 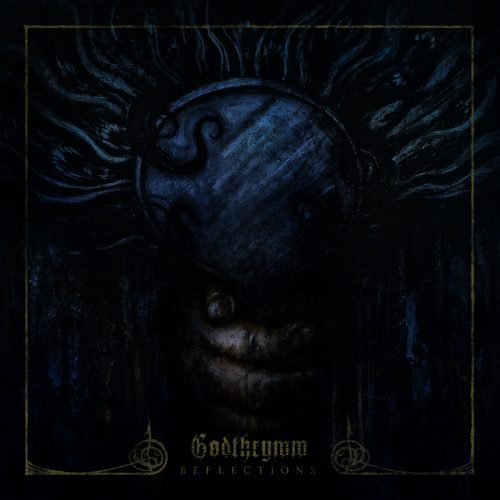 To say that Reflections is a highly anticipated release would be something of an understatement. After all, it’s not every album whose creators can say they’ve played a pivotal role in some of the British Doom scene’s most seminal bands, which means there’s an awful lot riding on this record to prove itself worthy of being part of such a weighty legacy.

Eschewing both the gothic glamour of My Dying Bride and the proggy proclivities of Anathema in favour of a grittier, more guitar-focussed approach which strongly resembles the early work of Paradise Lost (amusingly enough the one member of “the Peaceville Three” that no-one from Godthrymm has actually been part of), Reflections gets off to a solid, though not wholly remarkable start, with “Monsters Lurk Herein”.

And while this track serves its purpose well enough by immediately laying out most (if not all) of the band’s cards – the rough-and-ready, slow-and-steady riffing style, the mournful, melancholy lead melodies, the gruff, semi-melodic vocals (which are a dead-ringer for Draconian Times-era Nick Holmes) – if the rest of this album had continued in this vein you wouldn’t be reading about it right now, as a whole record of similar-sounding material wouldn’t have been enough to pique my interest.

Thankfully on track three, “The Sea As My Grave”, the band really cut loose, and never look back.

From the dread-inducing dynamics, eerie, minimalist melodies, and dramatic, dirge-like riffs, to the more varied and expressive vocals, everything about “…My Grave” just feels more focussed, more intense, and more creatively inspired. And the good times don’t stop there.

The epicly morbid “We Are the Dead”, for example, gives me exactly what I wanted (but only occasionally received) from last year’s sophomore Crypt Sermon album – namely massive riffs, massive hooks, and massive melodies not afraid of a bit of melodramatic excess – while “The Light of You” is a groove-driven Doom classic in the making, showcasing some of the heaviest riffing and most striking vocals on the entire record.

Speaking of vocals, while it’s undeniable that singer Hamish Glencross sounds a lot like Paradise Lost frontman Nick Holmes, that’s not the be-all and end-all of his abilities, and on tracks like the aforementioned “The Light of You” and the even more brilliant “The Grand Reclamation” (which is definitely in the running for the title of “best song” on the album) he delivers an impressively anguished and cathartic performance that goes above and beyond mere imitation.

I’ll grant you, the ending of this record is a little bit weaker (though, arguably, stronger than its beginning), but this middle section really highlights just how great Godthrymm can be when firing on all cylinders, and is practically worth the price of admission on its own.

So while Reflections may not be quite as spellbinding overall as those legendary albums with which it shares a common kinship, it shouldn’t be discounted either. In fact, at its very best, it’s fully capable of standing right alongside them.