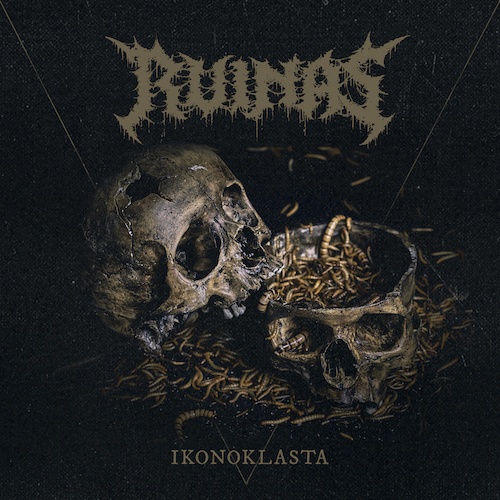 “Grinding Death Metal, sometimes dismal, sometimes punkish, sometimes sludgy, sometimes with a fuck off attitude….” That is how Spikerot Records describes the music on Ikonoklasta, the new album by the Spanish death/grind duo Ruinas, while also drawing comparisons to such bands as Rotten Sound, Incantation, Wolfpack, and John Carpenter.

While you’re trying to wrap your mind around that combination of references, we’ll tell you that Ruinas is the union of Rober, a member of the deceased Death/Grind legends Machetazo, and Angel, both of them hailing from the remote Spanish region of Galicia. We’ll also tell you that the band have a fascination with worms, spiders, rats and skulls, and a bleak view of humanity’s future. As you’ll discover from the song we’re premiering today from Ikonoklasta, their music is also far, far away from paint-by-numbers death/grind, and delivers dramatic emotional power (while also kicking a listener’s blood stream into a torrent). 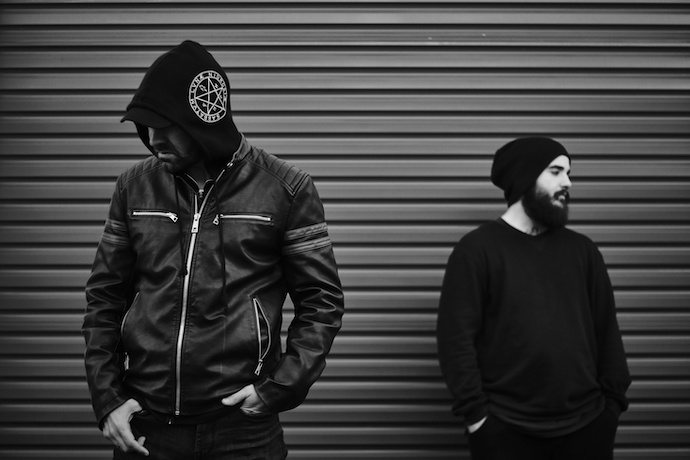 It makes sense to share this comment from Ruinas about the concepts underlying the music, because it adds depth to the song we’re presenting — “Fauces de Saturno“:

“The human being has long since reached its evolutionary climax as a species. Everything is already a visceral plummeting since then, while we continue autosuggesting ourselves with the naive idea that the world belongs to us. Ineffable, indisputable and inevitable, the degradation of our species is served on a silver platter. That’s the root of concepts around which the album ‘Ikonoklasta‘ revolves. The healing. The remedy. The cure.”

As for the music of this new song, it proves to be intensely affecting on multiple levels. It immediately envelops the senses in an attack of brutally battering drums, pulse-punching bass, and wild, grim, riffing that seems to channel sensations of tragic grandeur. The vocals (in the band’s native tongue) are absolutely raw and scorching in their fury. Periodically, the drumming erupts in blistering fusillades and the guitars become a seething mass of cruel savagery. But the drumming also slows to a more measured and methodical pace, as the vocalist howls and wails like a wounded wolf, and tremolo’d chords rise and fall, generating sounds of despair and soul-splintering grief. As the final heavy notes reverberate, the pinging tones of something like a child’s music box ring out, as if that has become the final peculiar remnant of a civilization destroyed.

Ikonoklasta will be released on March 20th by Spikerot Records. It was recorded and mixed by Brais Landeira at The Ocean Studios in Ferrol, Galicia (Spain), and it was mastered by none other than Pig Destroyer’s Scott Hull at Visceral Sound Studios in Maryland. The album will be available on digipak CD, black vinyl, colored vinyl, and digitally. To get more info about these editions and ro pre-order, check the links below — and also be sure to check out the stream of the album’s title track, which we’re including along with today’s premiere.