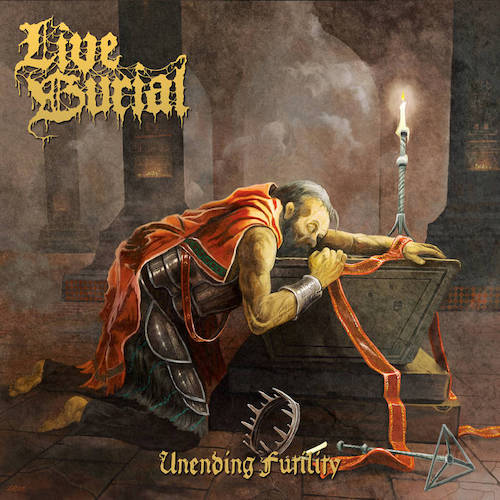 The UK death metal band Live Burial (whose five-man line-up shares members with Horrified, Plague Rider, and Rat Faced Bastard) demonstrated a lot of versatility over the course of their two early short releases in 2013 and 2014, and their 2016 debut album Forced Back To Life, prompting the people at Metal-Archives to characterize their music as “Death/Doom Metal (early)” and “Death/Thrash Metal (later)”. But after those people hear the band’s new album they will be left scratching their heads and wondering how to update that genre description. Maybe they’ll just sigh and write “Death Metal”, and leave it at that. It definitely won’t do to sum them up as “Death/Thrash” any longer.

The band’s new album, Unending Futility, displays a multitude of interests, most of them rooted in the early days of such bands as Asphyx, Morgoth, Death, Cancer, and Bolt Thrower (with doses of rampant grind-inspired savagery in the mix). But rather than a patch-work quilt of styles, Live Burial‘s songwriting produces dynamic songs that are cohesive, integrating their influences with remarkable assurance and gruesome style.

The first advance track revealed from the album in advance of its April 3rd release by Transcending Obscurity Records was “Condemned To the Boats“, which proved to be a roiling and rapacious gore-splattering assault that descended into gloomy depths of oppressive horror. The song we’re presenting today, on the other hand, is even darker and more horrifying, while also revealing an even more elaborate sense of dynamics in the (very impressive) songwriting. 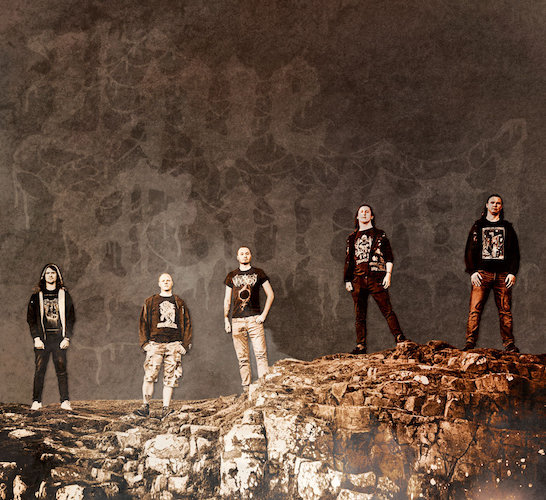 As this newest song’s title suggests, “The Crypt of Slumbering Madness” is both sepulchral and insane — an expertly guided journey through a house of horrors. In the opening, an eerie lead rings out and swirls high above a heavy, grimy riff that’s both dismal and imperious in its sound, and Lee Anderson ‘s prominent bubbling bass (whose performance surfaces repeatedly in fascinating ways). Those corrosive and oppressive main ingredients are joined by vocals that scorch and roar and an array of skull-cracking drum rhythms.

The heavy guitars periodically hammer in mounting fury, segmenting the long groaning reverberations, and near the middle the band shift into a higher gear, creating a sensation of frenzied chaos, the drums pummeling, the bass becoming feverish, the massed guitar sound becoming vicious and seething. Closer to the end, the band leap into another high-energy surge, with the guitars creating a sensation of savage chaos. With vocalist Jamie Brown tearing himself inside-out with wild tormented screams, the song concludes in apocalyptic fashion as drummer Matt Henderson relentlessly hammers and guitarists Rob Hindmarsh and Richard Codling join together to create a harrowing blizzard of sound that seems to channel both desperation and devastation

This new album also includes guest vocals on “Cemetery Fog” by Kari Kankanpaa (Sepulchral Curse, Solothus) and an acoustic guitar performance on “Winds of Solace” by Dan Rochester (Vacivus, Cruciamentum), and the cover art was created by Luke Oram (Slugdge). Transcending Obscurity will release it in a variety of formats, which you can learn more about via the pre-order link below.