(Andy Synn reviews the new album by Finland’s Black Royal, which was released by Suicide Records on February 14th.)

Maybe it’s just me (I don’t think it is, but you never know) but it seems like the last several years have seen quite a lot of bands, both old and new, turning back to the “old school” for inspiration.

And while there are lots of speculative, pseudo-psychological reasons for why this might be so (there’s certainly something to be said for the idea that during unsettling or uncertain times we’re more likely to cling to what’s familiar), I honestly think that the best explanation for this recent “old school” resurgence is that quite a lot of bands have simply grown dissatisfied with what more modern trends have to offer them (and, in turn, demand from them).

Of course, this isn’t necessarily anything all that new. Metal has, after all, often been quite an insular scene, with a large fixation on its own history, and practically every year sees the emergence of yet another wave of “retro” groups trying to recapture the spirit and the sound of Metal’s “golden age”… mostly without really adding anything to it.

But, of late, I’ve really taken note of how many bands have been trying to do more than just imitate the classics by taking and twisting them into fresh new shapes, repurposing clichéd ideas for new purposes, and by mixing and matching “timeless” elements in ways which would once have been unthinkable.

I’m sure we can all think of lots of current/recent examples of this (Chapel of Disease immediately spring to mind). But the one I want to bring your attention to today is the brilliant second album from Finnish riffmongers Black Royal. 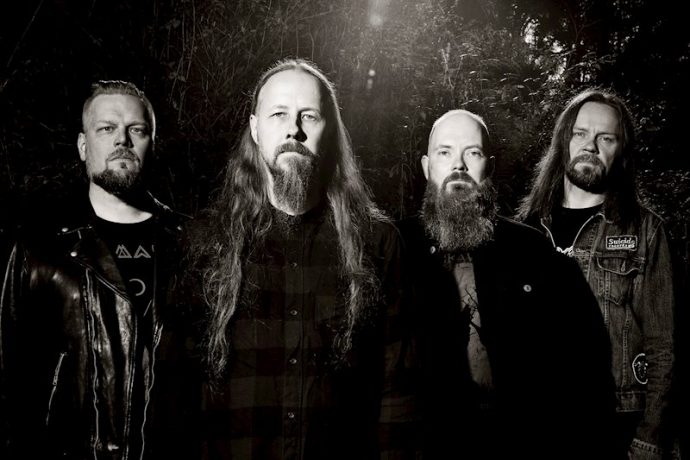 To make a long story short, Firebride sounds like the result of some mad time travel experiment where some rapscallion (possibly in a stolen/borrowed Delorean) got together members of early Entombed and Black Sabbath and gave them access to modern day amps and recording equipment.

By which I mean it’s a hefty slab of Old School Swedish Death Metal heaviness meets Classic British Doom Metal groove that somehow manages to put a fresh (not to mention furious) spin on the traditional Death/Doom dynamic.

Some of you are undoubtedly picturing early My Dying Bride, etc, while others are probably thinking of the altogether nastier style of Asphyx et al.

The sheer swagger of Black Royal, however, situates the band more on the Stoner side of the Doom spectrum (which isn’t that surprising really, considering that Sababth themselves were partial to the occasional mind-altering substance), and suggests that there’s a lot of fertile ground still left to explore at this particular nexus between Stoner/Doom and Death Metal.

That being said, when compared with the band’s 2018 debut album, Lightbringer, their latest output arguably has even less of a Stoner vibe… although perhaps it would be more accurate to say that they haven’t so much decreased this particular aspect of their sound as much as they’ve ramped up the Death Metal side of things considerably! 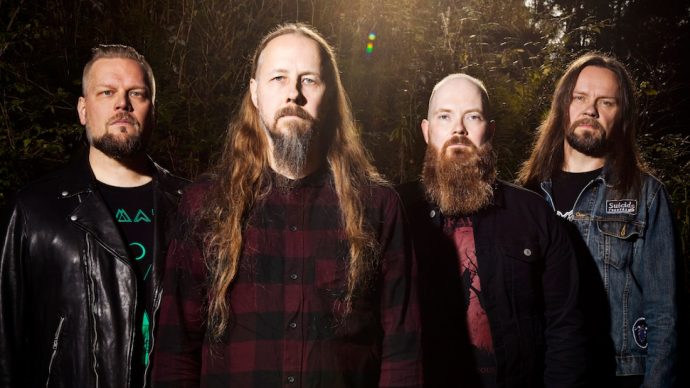 This is immediately obvious once the teasing introductory bars of opener “Coven “ are out of the way, as the massive, distortion heavy guitars (and bass) and harsh, gravelly vocals find Black Royal channelling the infernal spirit of Entombed and Dismember for all their worth.

Of course, the song’s lurching, heaving rhythms and moody melodies maintain a devilishly doomy aura throughout, ensuring that BR never fall into the mire of overt OSDM worship, while the plethora of absolutely massive hooks mean that you’re unlikely to get this track out of your head once you’ve heard it (the line “Please forgive me Satan, for I have not sinned” is especially catchy).

Actually, the more I think about it, the more obvious it becomes that, for all its buzz-saw riffery and doomy delirium, Firebride is all about the hooks.

Whether it’s the chunky chugging riffs and stomping chorus of “Hail Yourself”, the grimly majestic, monumentally groovy “Pagan Saviour” (an obvious choice for the album’s first single, as well as possibly the best track here), or the brooding bombast of “All Them Witches”, every track here is tailor-made for massive volume and multiple replay value.

And while it’s the brutal simplicity of this album which makes it so instantly infectious and easy to pick up, don’t go thinking that Black Royal are dumbed-down or low-brow. In fact this Finnish foursome are as cunning as they are crushing, sneaking in a wealth of melody and atmosphere (as well as some striking Satanic imagery) over the course of the album’s thirty-eight minutes (and change).

A buddy of mine even pointed out that there’s an almost Behemoth-like sense of grandeur to some of these tracks which, while not perhaps a comparison I would have made on my own, is something I can definitely see now that he’s mentioned it (not that Nergal and co. would ever be ballsy enough to take these guys out on tour now that they’re so busy chasing the mainstream money-train).

I could go even further with my effusive praise for this album – heck, I’ve not even mentioned “The Reverend” (think Wolverine Blues only with more actual Blues), the frankly humongous title-track, or the deathly, doomy magnificence of “For the Dead Travel Fast”) – but I don’t want to blow things out of proportion any more than I already have.

Suffice it to say that while Firebride may not be pushing Metal into exciting new waters as-yet-untapped by mortal man, Black Royal have somehow managed to find new depths in this pairing of timeless sounds, and could well, with the right push, be onto something really big here.