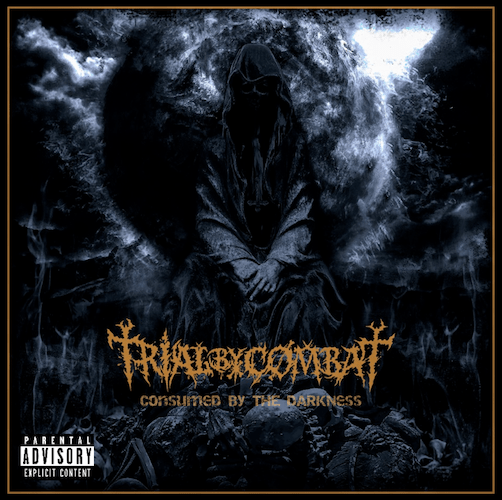 A couple of sleazy harassing dudes fall for the bait and pay the ultimate price — one gets off easy with a bullet to the head, while the other experiences exsanguination by a thousand vicious cuts. Sound exciting? That may depend on how well you react to maniacal torture and abundant blood spatter, which the video we’re presenting delivers in especially vivid fashion (thanks to the filmwork of Mike Sloat). But regardless of your taste for violence and gore, the song accompanied by the video is undeniably a full-throttle thrill ride.

The band in question, Trial By Combat, clearly know how to kick a listener’s pulse rate into high gear, using a hard-grooving, hard-charging amalgam of death/thrash and hardcore as their high-octane fuel. That they’re so good at this isn’t a big surprise, given that this California group from Santa Rosa and Sacramento have been honing their craft for more than 13 years, participating in two Vans Warped tours and sharing stages with such bands as Soulfly, Black Dahlia Murder, Tyr, Hatchet, Aenimus, and many others.

What’s perhaps more surprising is that only now are the band planning the release of their first full-length, after releasing three EPs. But based on the song we’re premiering today — “Exsanguination Excite” — the wait seems well worth it. 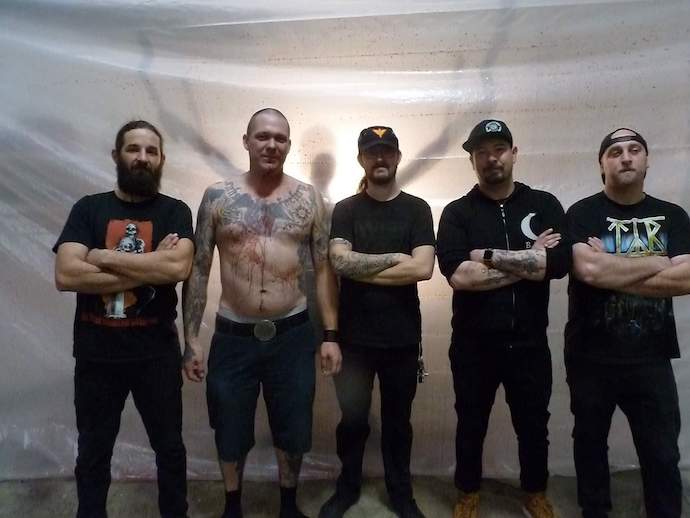 Once the song gets in gear during the blood-splashed video, the adrenaline starts flowing immediately, thanks to an electrifying, fast-pulsing riff and a neck-snapping snare beat. The darting and swirling fretwork of Aaron Dudley and Jesse Palmer continues to fly unabated as bassist Jesse Grossmann supercharges the rhythmic drive and drummer Nathan Garlick kicks the song into a gallop. You’ll also discover that the track includes some damned potent, skull-busting grooves, and that Dashiel McKenzie‘s wild howls and ferocious growls channel fury with genuine blood-thirsty conviction.

But full-bore mayhem isn’t the only thing the song delivers. The band ease back on the throttle to make way for fanfares of grand melodic chords, and Palmer also sets off fireworks with a spectacular fret-melter of a solo, not long before the band shift into a roof-collapsing breakdown that’s as dismal and desolate as the fate of that last man bleeding out on the slab.

“Exsanguination Excite” will appear on Trial By Combat‘s debut album Consumed By the Darkness, which is projected for release in May of this year. It will soon become available for pre-order on the group’s Bandcamp page. To find out when that happens, follow Trial By Combat on Facebook: