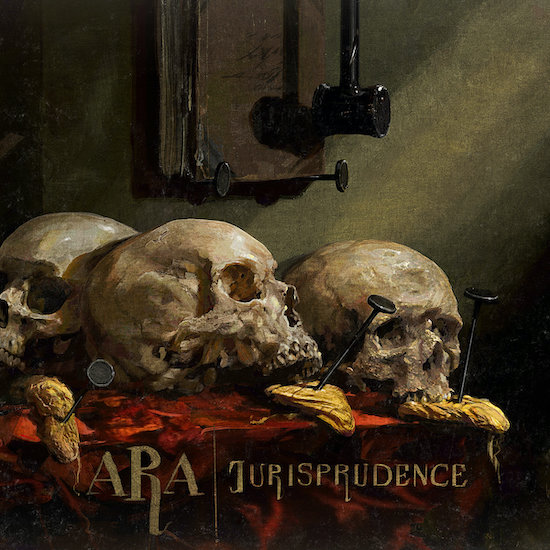 A long five years (and change) have passed since the Wisconsin death metal band Ara released their debut album, Devourer of Worlds. That proved to be a serious eye-opener and jaw-dropper, an approach to technical death metal that our review likened to an amalgam of such bands as Anata, Gorguts, and Necrophagist, presenting complexity, dissonance, and brutality, and achieving “a fine balance between beating you down and freaking you out”.

Five years on, and now we welcome the return of Ara, most of whose members also share roster spots in the sludge metal/post-rock band Northless. Their sophomore album Jurisprudence is now set for release on May 15th, and today it’s our pleasure to present a premiere stream of the title track. 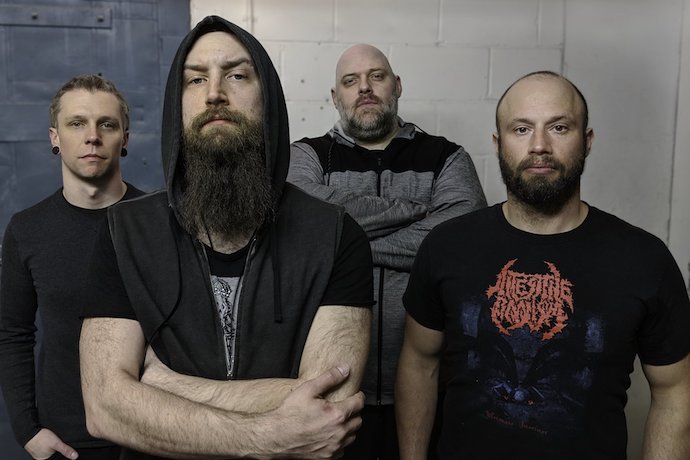 The ingredients highlighted in our review of the band’s debut full-length are still very much present, but the compositions are even more inventive yet even more well-integrated, and the execution seems even sharper. The title track provides riveting proof of those advances.

The intricacy and technical flourishes within the track are immediately evident. The fretwork is jittery and jolting, swirling and swarming, and all that mind-bending mayhem is punctuated by percussive bursts that provide a facsimile of automatic weapon fire, and by big groaning chords and punishing pile-driver grooves. Tendrils of eerie melody slither through the mind-warping and body-mangling ruination delivered by the song, and the howling, growling vocals are raw and savage.

The song spawns images of a mechanized warzone, perhaps one in which alien forces have brought off-planet technologies to bear along with the ravages of brutish beasts, and a bit of sorcery as well. Yet the allusion to alien armaments isn’t meant to detract from the very human emotions that also course through this ravaging track. And that’s  a factor that Ara have themselves commented upon:

“This is easily our most cohesive material to date while at the same time most challenging, and great care was given to preserve songwriting integrity while still confronting the limitations of the genre. We purposely dialed back some of the otherworldly elements of the last record and focused on an organic approach rooted in a more terrestrial soundscape. This enabled us to regain a relationship with more conceivable elements of tragedy and horror while still expanding on human revulsion to them and existence in general.”

In addition to the striking power of the music, Jurisprudence benefits from the remarkable talents of Berlin artist Eliran Kantor, whose painting graces its cover. About that artwork and its ties to the music, we’ll share the comment of Ara guitarist Jerry Hauppa:

“As for the cover, I found myself intrigued by dead languages, and what causes a language and tradition to die. I came across an African language called ǁXegwi that died when its last remaining speaker was murdered, and I thought about what a tragedy that is to have something passed for generations be taken way in such a violent means, but then I thought about a fantasy scenario where maybe the last speaker was murdered because the language had to be killed. Maybe there was something evil in that language where it couldn’t be uttered by someone without consequence and there was a positive motive to ending it. So being inspired by that idea I came up with the visuals for the artwork and the severed tongues as a warning to those who decide to trespass linguistically into forbidden grounds. The lyrical concepts for this are explored in ‘Etymologicide’ but the album title Jurisprudence reflects the idea of forbidding a cursed language as written law with a visual warning to those who betray it.”

As noted above, Jurisprudence will be released on May 15th, and it’s available for pre-order now. In addition to today’s premiere we’re also including a stream of the album’s first single, “Cytokine Storm“.