Today we’re beginning the roll-out of one track from the split by each of these four bands — one per day from now through the end of this week. By then we fully expect you’ll be salivating over this release, though honestly, it shouldn’t take more than today’s song from Nucleus to get the slobber flowing. 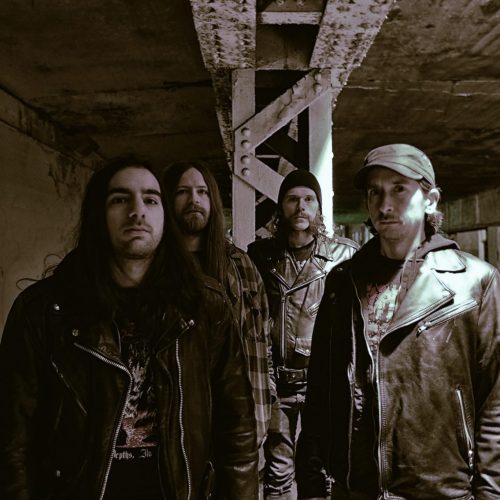 This Chicago-based, sci-fi-themed band should need no introduction to connoisseurs of death metal, especially in the aftermath of their 2019 album, Entity. As our own Andy Synn wrote in his review, that album married “the meaty, malevolent riffosity of Morbid Angel to the proggy, proto-brutalism of Death” and did so “in a way that’s so vibrant, so visceral, and so thrillingly vital, that, even now, it still sounds as fresh as when Azagthoth and Schuldiner first set finger to fretboard”.

But as Andy also wrote, Nucleus are far more than just the sum of those influences (and others). “Each of the eight tracks presented here… walks, runs, and gallops along a fine line between chaos and control, familiarity and innovation, in a way that refuses to be boxed in or confined by convention”. The songs are “technically adept and subtly unorthodox without being overly flashy or dizzyingly dissonant, such that the warped leads and warp-speed riffs which form the meat and marrow of this album retain a sense of sinister unpredictability which, nevertheless, never threatens to interfere with the band’s explosive, rocket-propelled momentum”.

All those qualities are spectacularly on display in the track we’re premiering today off the new split.

“Replicant” is a chameleon-like monster, ever-changing yet cohesive, capable of inflicting body-mauling carnage while simultaneously flipping your brain upside-down and sideways, but held together by an iron-hard skeleton of compulsive grooves.

It’s an extravaganza of screeching strings and blaring chords, of pile-driving rhythms and racing ravages, of obliterating percussion and mauling riffage, as well as freakishly darting bass notes and guitar acrobatics that include rapidly slithering tonalities and fret-leaping angularity. All that discordance and destructiveness is coupled with rapidly veering drumwork executed with astonishing speed and a level of inventiveness that matches the mad genius of the guys behind the stringed instruments. Thanks as well to the monstrous, enraged growls, the music is utterly barbaric as well as tech-tastic. When the pure mind-mutilating mayhem briefly abates, and the music slogs and groans, it’s only to set the stage for a bout of crazed soloing.

The whole thrill-ride is absolutely electrifying, and a great reminder of what a high level these dudes are operating on. And you’ll be happy to know that the split includes a second Nucleus track (“Nexus“) that delivers a further dose of malicious marvels.

Unspeakable Axe Records will release the split on CD and digital, with 4-panel art by the famed Mark Riddick. Pre-orders are available now via the link below, and we’ll also mention that in April Nucleus will be embarking on a North American tour with none other than Rippikoulu and Chthe’ilist. For details about that, be sure to visit the Nucleus FB page. And check back with us each remaining day this week for more premieres from the split.