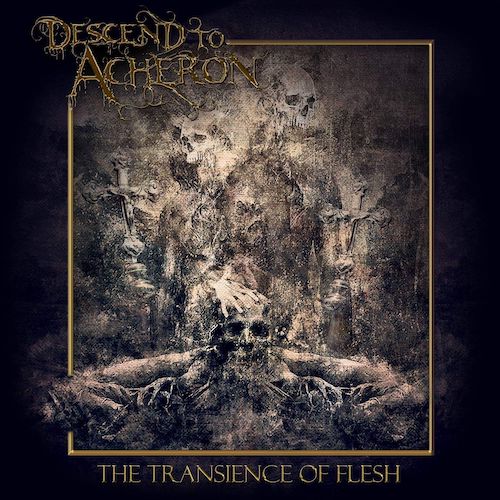 Tirades within extreme metal against the victimization of the poor by religious figures aren’t new, but the song by Australia’s Descent To Acheron that we’re about to premiere through a lyric video is an especially fierce discharge of disgust and rage. In this track, “Your Suffering Is A Gift“, their subject is Mother Theresa, who was canonized by the Catholic Church but who has also been condemned for promoting “a cult of suffering” that glorified illness instead of treating it.

But in addition to venting fury with supercharged power and blazing speed, the song is an especially riveting experience because it turns out to be so surprisingly multi-faceted — and it provides a great introduction to this Adelaide band’s crushing debut EP, The Transience of Flesh. 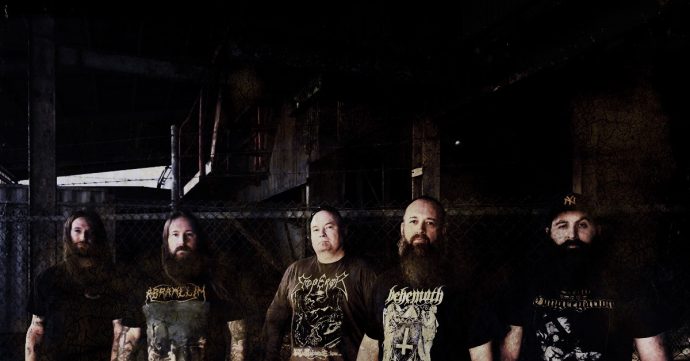 Although The Transience of Flesh is Descend To Acheron‘s debut EP, the members aren’t newcomers, having performed with many other hard-hitting bands over the years. In this new formation, they take their cues from the likes of Suffocation, Behemoth, and The Amenta (among others), creating technically impressive death metal with a bit of blackening in the mix, and a taste for melodic flourishes that make the music even more memorable. In addition, Dave Haley (Psycroptic, King, Ruins, The Amenta) performed as session drummer on the record.

“Your Suffering Is A Gift” is a prime example of the band’s hybrid of inspirations. It’s a fast-paced, bludgeoning and battering gauntlet of sound. Furiously flying on the back of Haley‘s bullet-spitting drums, the band blaze away with fleet-fingered riffing that’s fast-twitching, maniacally vicious, and also emotionally bleak and bruising. The ferocity of the music is further amplified by the barbarity of the vocals, which range from guttural roaring to flesh-stripping shrieks.

This would all be very well and good, but it turns out that there’s more to the song than high-voltage electricity and mauling brutality. Just past the mid-point a fireburst of a guitar solo fluidly leads the song into a surprising and mesmerizing diversion, in which the music becomes mystical and a haunting female voice soars over the mist. It’s an entrancing experience that somehow fits, despite how dramatically different it is from the high-tech savagery surrounding it.

In addition, The Transience of Flesh includes guest vocal performances by Pahl ‘Doomsayer’ Hodgson (Beyond Mortal Dreams, Oath Of Damnation) and Lia-maria Marsiglia.

The EP was recorded, mixed and mastered at vocalist Andy Kite’s Against The Grain Studio. The lyric video was made by Rebecca Bogert at Against The Grain. And the song will be available for free download on Bandcamp. For more info about the release of the EP, follow the band on Facebook.