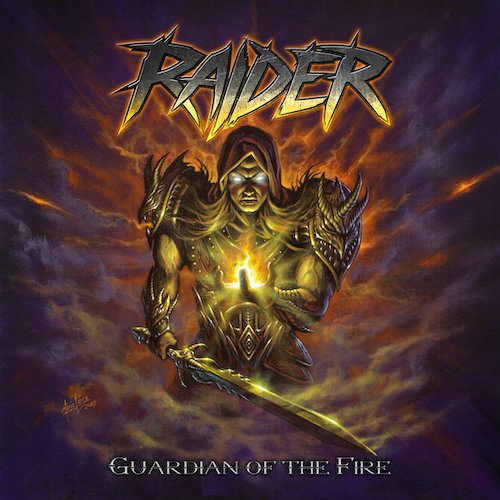 Straight out of Waterloo, Ontario comes the ferocious death/thrashing band Raider, who in very short order have established themselves as a force to be reckoned with, with nitroglycerine in their veins, demons in their heads, and the kind of machine precision in their execution that only makes their mayhem more electrifying.

They popped a lot of eyes wide open with their 2018 demo, Urge to Kill, and opened more eyes when they followed that with festival appearances at Hamilton Deathfest, Guelph Deathfest, and Kitchener Metalfest. What they’ve now done, however, is even more explosive. We’re talking about their debut album, Guardian of the Fire, which will be released on March 20th. The singles released so far from the album have already generated a lot of excitement, but now we’ve got the full thrill-ride for you as we premiere a stream of the entire record. 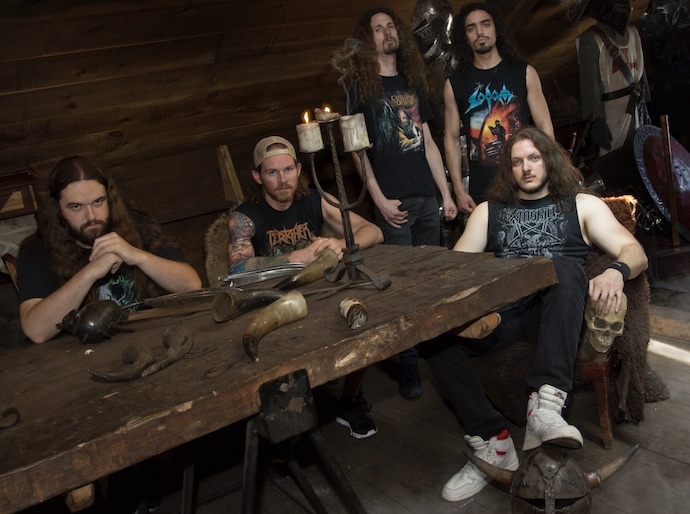 “Bound By No Fate” provides a terrific launching pad for the album, delivering a turbocharged assault of bludgeoning drums, high-speed hellfire riffing that wildly pulses and savagely slashes, and absolutely ferocious vocals that maniacally veer from carnivorous roaring to maniacal shrieking. Yet while the music is screaming mayhem, it also shifts gears into a poisonously seething sensation that’s cruel and grim, accented by a pair of eerie wailing guitar solos over a jackhammering groove and capped a final spine-tingling scream.

One thing becomes immediately clear from that rocketing opener — the band are formidably talented in their ability to discharge plundering rhythmic grooves, electrifying riff storms, and absolutely unhinged vocal terrors. And Raider continue proving that over and over again, splicing together head-hammering, pulse-pounding rhythmic propulsion and fast-twitching, flame-throwing fretwork. They pack the album with opportunities for a headbanger to revel in sore-neck syndrome, and to bounce off mental walls in mosh-making frenzies — and yeah, you’ll have to do that in your head, because who knows when we’ll actually have mosh pits again?

The songs are also jam-packed with superior guitar soloing, some of them incendiary in their fret-melting extravagance, some of them as creepy as wraiths breathing down your neck. And while Raider’s comfort zone is clearly in the fast lane, blasting other vehicles out of the way with hell-for-leather speed, they do pick their moments to inject moments of start-stop, spine-jolting groove and to ease up on the throttle, usually for the purpose of more mercilessly hammering your neck into submission or enhancing the feeling of sinister menace.

And along those lines, the guitar instrumental that opens the title track creates an ominous, supernatural sensation that helps make that song one of the album’s many highlights, and the intro to “Ravenous Hydra” seems like a visit to a cemetery where spirits of the dead are rising from rotten earth.

One thing that never really changes, however, is the sheer unbridled savagery that lives in the music like some barely caged ravenous beast, though the band create that feeling while at the same time executing their mission with technically razor-sharp, tightly integrated skill. And the production job gives the music a truly powerhouse sound that provides clarity without diminishing the music’s blood-rushing, skull-busting force.

So, get ready for a mind-bending thrill-ride and then hit play on our full stream below.

Guardian of the Fire is recommended for fans of Exmortus, Annihilator, Skeletonwitch, Deicide, and Carcass, and it features cover art by Mario Lopez. It’s available for pre-order now. and with that, we’ll leave you with the band’s own welcome to what you’re about to hear: