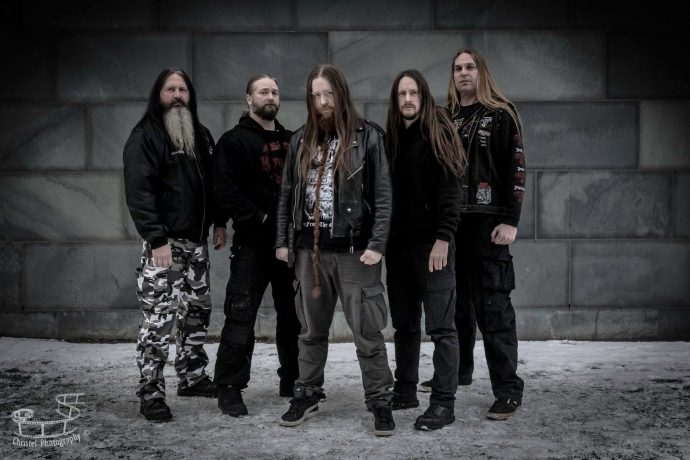 (DGR turned in a double-review, but in his own inimitable fashion he wrote so many words about each of the two albums that your humble editor decided to split it in two, and the second review will be posted a bit later today.)

In today’s case it’s weird that these two albums feel like catching up a bit, since these two projects share a vocalist whom we’ve written about numerous times before and both of them are right in that wheelhouse described above. One is more modern and melody-focused despite its overall insistence on how world-ending it paints its protagonists in the songs, and the other is flavored with apocalyptic flair but with the chainsaw guitar aimed at a more old-school crowd. And thus we find ourselves catching up with Berzerker Legion and a crew more familiar to our site’s readers, Wombbath. 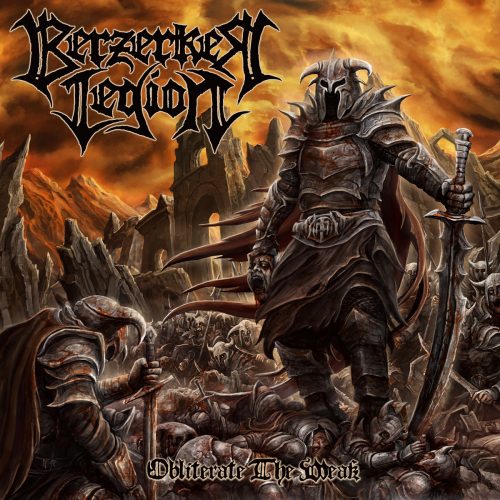 Berzerker Legion is the newer project of these two. Their late-January release of Obliterate The Weak via Listenable Records marks the group’s first full-length debut. Prior to that was only the preview single “Of Blood And Ash”, which also finds itself in the track-list here.

The roster of Berzerker Legion is impressive enough on its own, with members involved in a handful of notable projects like Dark Funeral and Asphyx, as well as Sanctification and picking up live duties for Hypocrisy among the stringed section. There’s also drummer James Stewart of Bloodshot Dawn and Vader continuing to make drumming look so criminally easy that it’s almost disheartening to watch, and ever-prolific death metal vocalist Jonny Pettersson providing a healthy growl over the legion’s gallop.

An all-star cast like that could whip out some solid death metal by reflex alone, but Obliterate The Weak manages to surprise anyway by embracing its thematic warrior mythos and playing it up tenfold so that the songs become the sort of death-metal battle anthems meant to circle-headbang along with, and in some ways quietly does so better than some of the more well-known death metal hordes of the scene.

After the two-minute intro of “Rise Of The Berzerkers”, Obliterate The Weak lays out its entire blueprint within its first three songs. The opening salvo of “A World In Despair”, “I Am The Legion”, and the previously mentioned “Of Blood And Ash” all effectively demonstrate the songwriting moods that Obliterate The Weak rotates between for the nearly forty-five minutes it asks of you. Two of those are also some of the longer songs on the disc, where most of the tracklisting hovers pretty steadily between four-and-a-half and five-minute songs, with the title track splitting the difference at four-forty-five. The one real epic-length track is the groover “The King Of All Masters” at six-and-a-half minutes.

While the numbers don’t tell you much from just reading them, after listening to the opening few tracks they should provide a better idea of the sort of dense block of pit-riffing that is being provided by Berzerker Legion here. You’ll figure out real fast if those first few songs work for you, and if they do you’ll be along for every martial thump and hammering double-kick segment to follow.

When a song like “World In Despair” opens with a thrash-leaning drum segment and an almost melodeath guitar assault early on, you can see why the Berzerker Legion crew have drawn a few comparisons to Amon Amarth and their branch of the death metal tree. But “I Am The Legion” is a little more death-metal-heavy — with vocalist Jonny Pettersson dominating the song with a massive roar to match the song’s ‘monster rumbling through the wasteland’ style of songwriting, and the occasional backing symphonic bit just to make “I Am The Legion” seem even larger than it is.

“Of Blood And Ash” picks up where “I Am The Legion” left off. It is another massive song but one whose ambitions are a little less epic and a little more tribal warlord, post-victory. Combining the three together makes for an already dense block of music after the intro track, but they’re also a pretty good idea of what Obliterate The Weak has in store as a whole. It is a disc of massive songs, led by some glorious guitar work and a vocalist happy to be at the front of the charge while the rhythm section gets to fall into the battering ram archetype and does so expertly.

There are still a couple of late-album surprises to be found, even after the heavy focus on the first few segments of the disc. Since so much of Berzerker Legion‘s debut is colored by the album having a very clear series of moods — so much so that songs could be paired together — a slower track like “The King Of All Masters” with its glorious lead guitars during the chorus and constant stomp helps to break things up. It’s a six-and-a-half-minute battle hymn for shield beating, though in Berzerker Legion‘s case they have made pretty clear that this is the army of hell on the march.

“The King Of All Masters” lies in between a pair of faster songs: “The Falling Dawn” and “Upon The Throne Of Mortem”. “The Falling Dawn” has one of the better opening segments in Obliterate The Weak, as its main guitar gallop makes its first appearance almost immediately, the sudden lurch being the musical equivalent of being launched out of a cannon right on to the front lines. “The Falling Dawn” as a whole is a massive battle anthem — like many of the songs on the album — but pretending that it isn’t one of the more headbanging-worthy songs would be a foolish act.

“Upon The Throne Of Mortem” is the third song of this arbitrary triptych and has the responsibility for working people back into the last couple of faster songs. It does so by becoming a gigantic near-four-minute circle pit punctuated by a huge guitar chug during its chorus. It’s not often that you get to say a segment feels like it was written for a drummer to drive the band, but each time they shift gears from high-speed to a big caveman segment in this track you can feel the drums getting a little punchier. 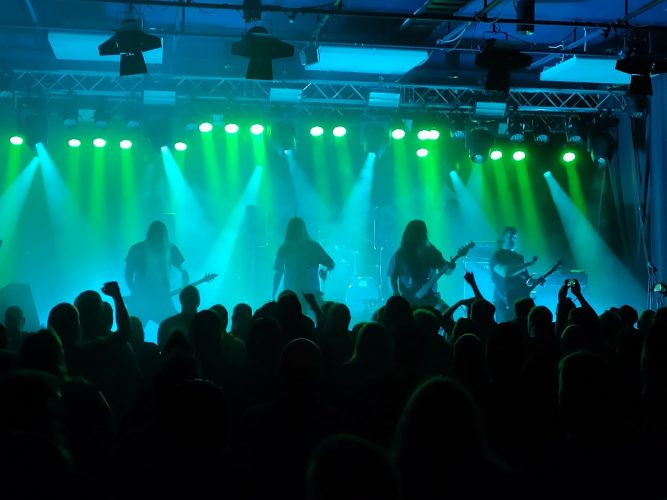 The blueprint from which Obliterate The Weak was built is battle-forged and easily recognizable, but when it’s done this well it’s hard to deny. The record is nearly forty-five minutes of constant headbanging anthems. The band cast themselves as a figurative army of hell early on and use that as the driving force to write ten death-metal battle songs. It isn’t the sort of disc that pushes boundaries but it is one in which every element is so well-executed that picking apart each particular piece is fun. You can recognize why certain parts of the album keep lighting up the pleasure centers of your brain and can discern exactly how they’re doing it, but damnit they’re so good at it that having the songs pop up even randomly is a blast.

The band-members’ combined resumes may overshadow the disc as something of a stealth death-metal supergroup, but Berzerker Legion have managed to pull off an impressively fun debut album with Obliterate The Weak.