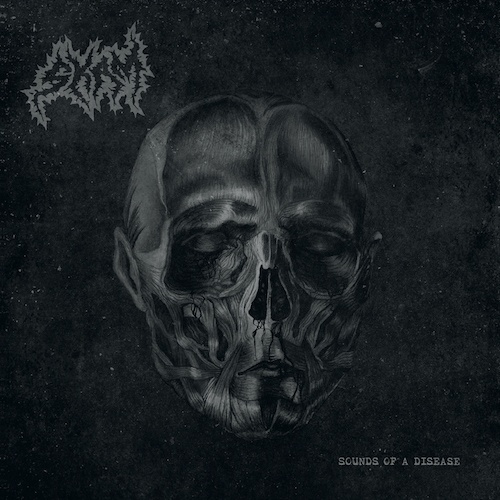 This is not a scam. It is Skam, a one-man Swedish band whose name (we’re told) means “great dishonor, shame, or humiliation”. It is (we’re further told) “an act of catharsis through music” whose “main purpose is the releasing of stress while lamenting the world’s declining mental health and the obscene amount of suicides caused by it”.

This is not idle talk, because the band and their label Redefining Darkness Records are making digital copies of Skam‘s album Sounds Of A Disease available for $1.00 “as a means of therapy for those who may benefit from it”. And upon the album’s April 3rd release date the digital version will be free.

The characterization of the music as “an act of catharsis” isn’t idle talk either. As a means of exorcising your own demons, this amalgamation of grindcore and death metal (with influences from d-beat punk) is absolutely explosive, as you’ll discover through today’s premiere of a track called “Shit Out of Luck“.

This new song erupts from the starting gate with a pairing of immediately eye-popping sensations — thunderous bombast riffing and melodically crazed fanfares (with the feeling of a mad orchestra performing in a frenzy while the asylum burns), undergirded by percussive bursts of snare-drum and double-bass. That unhinged grandiosity grabs attention damned fast, and once Skam has fixed us in place like a pinned butterfly the song then hurls us into a violent firestorm of blasting drums, maniacally whipping riffage, and wild demonic shrieking.

The track rushes like a rocket, its destructive hurtling barrage laced with tremendous jackhammering grooves and further spurts of fretwork freakishness, including a reprise of those berserker fanfares from the opening, and further expulsions of lunatic vocal hostility.

Within the menace and mayhem of the current times, many of us may indeed be feeling shit out of luck, but this furious, nerve-firing, pulse-pounding track — whose vibe Skam describes as “extreme aggression with a neoclassical detour” — seems capable of turning those feelings around almost single-handedly. It seems to scream, “Fuck it all, I’m going to survive!”

Sounds of A Disease was written, performed, recorded and produced by the band’s alter ego, M, with backing vocals by Adrian Selmani and Elin Hjalmarsson and hurdy-gurdy by ‘Professor Loop’. Further credits: Mastering by John Bart Van Der Wal at Hewwetover Studio; artwork by Valeria Metsker at Blood Art; and logo by Patrik Tegnander at Chainsaw Design.

Please also listen to the previously released track, “When Liquid Is the New Solid“, which we’ve also included below. It’s also hellaciously wonderful — though maybe even more frightening and fragmenting than the track we’re debuting.