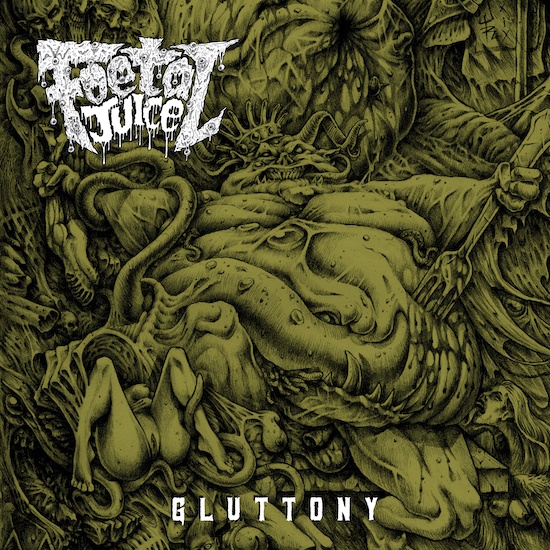 Derek Carley fuckin’ practices what he preaches! In this video for a song called “Gluttony” he stuffs his gullet with kebabs while howling like a rabid demon at his rabid audience — and then self-eviscerates, spewing gore across all the greedy faces and then feeding their ravenous hungers with his own intestines. Deeeelicious!

It’s a hilariously grotesque film, with a little surprise at the end which proves that gluttony survives even death. And speaking of death, the song itself is a berserker blast of electrifying death-grind, vicious and wild and… eviscerating. 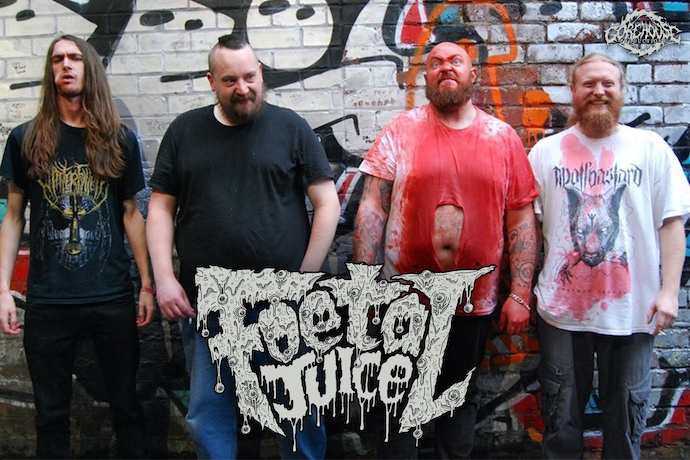 “Gluttony” is the title track of these Manchester mutants’ second album, which will be available June 12 via Gore House Productions. As the band explain, “it’s a lot faster, heavier and much more aggressive, both musically and lyrically, than anything we have previously written”. And while the album’s title could be taken simply for one of those seven deadly sins, it stands as a metaphor for something more expansively diseased and disgusting. Again from the band:

“Lyrically this is about us and the rest of society being spoilt, greedy, selfish, and not worrying about the gluttonous consequences that come with it. We dramatised the idea of Gluttony into a comical horror film, but the general idea is still the same. The kebab in our video is the Holy Grail, and even when consumed, the people want a portion after being teased by the dangling strips of flesh.”

In the music for the title track, Foetal Juice immediately step on the gas, racing ahead in a blaze of blaring and hammering riffs while the rhythm section batters and brawls. The fretwork generates maniacal screeching pulsations, bursts of scissoring savagery, and ejections of cruel grinding mutilation. In line with the turbocharged instrumental mayhem, Derek Carley roars and screams like a man possessed, but the band manage to thread head-busting grooves throughout the course of this crazed feeding frenzy of sound. Deeelicious!

For those who might be encountering Foetal Juice and their twisted black humor for the first time, let us also share with you a few words from the band’s bio: “Since 2005, the Manchester-based quartet has been hard at work in the Extreme Metal Underground scene. FOETAL JUICE is a band with a passion for the gory and perverted side of life, introducing black humor and pure horror with subject matter including strange sects of nuns who piss in the font and eat their own shit as a form of worship, and creepy barflies that wait till women leave then furiously sniff their seats to inhale the sweet pheromones.”

In addition to frontman Carley, Foetal Juice is rounded out (get it?) by guitarist Ryan Whittaker, bassist Lewis Bridges, and drummer Robert Harris.

Pre-orders for Gluttony will open up soon, so keep an eye on these locations to learn when that happens: