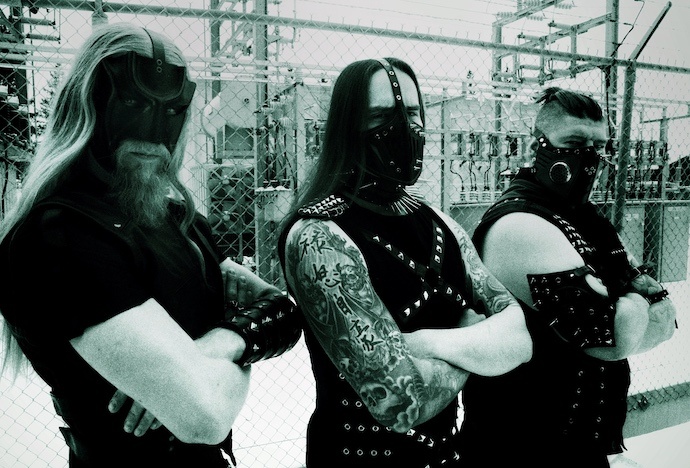 A dozen years into their career, the masked marauders in Black Pestilence from Calgary, Canada, will be discharging their sixth studio album on May 1st, and it’s a scorcher — a high-flying, hard-hitting, blood-lusting hybrid of black metal, punk, and noise that floods the system with adrenaline.

To help spread the word about the new album, the title of which is Hail the Flesh, today we’re premiering an official video for “Spurn All Gods“, a track that’s fast and filthy, feral and ferocious, and a non-stop thrill-ride in both sight and sound. 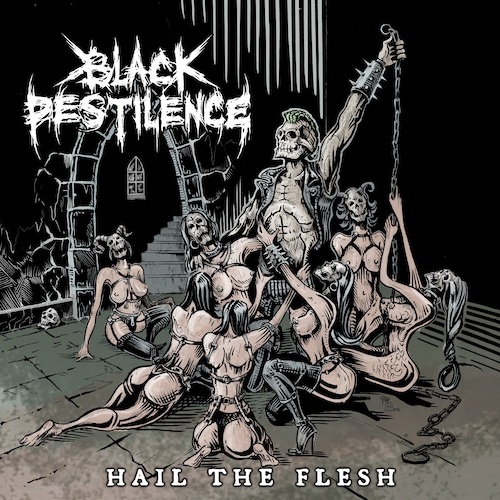 Band founder, bassist, and vocalist Valax tells us that Hail The Flesh is “fast, and chaotic”, and that lyrically it’s about “glorifying the carnal lifestyle and celebrating Earthly pleasures and indulgences” — inspired by Satanism, “but not on a theistic level, just true, carnal, humanistic Satanism” (though some of the lyrics also deal with social issues).

The song featured in today’s video is savagely defiant. It’s a rampaging surge of punk rhythms and blazing blast-beats, of bone-mangling and insidiously seductive bass, of screaming leads and scorching vocal barbarism, and of riffing that segues from thrashing and slashing to searing tremolo’d writhing.

The song is absolutely electrifying, packed with physically compulsive rhythms, hook-laden melodic accents, and a genuinely carnal vitality. But at well-chosen moments the band slow things up a bit and turn the music in more bleak and bruising directions before jamming the pedal to the metal again.

The video does a great job capturing the balls-to-the-wall energy of both the song and the band’s performance of it, and credit for that goes to Erik Labossiere, who filmed, directed, and edited it at Wikked Twist Media.

Hail the Flesh is recommended for for fans of Toxic Holocaust, Impaled Nazarene, Municipal Waste, Midnight, and Cradle of Filth. It will be released on May 1st and will be available on Bandcamp and Spotify — but “Spurn the Gods” is available for download right now as a digital single.