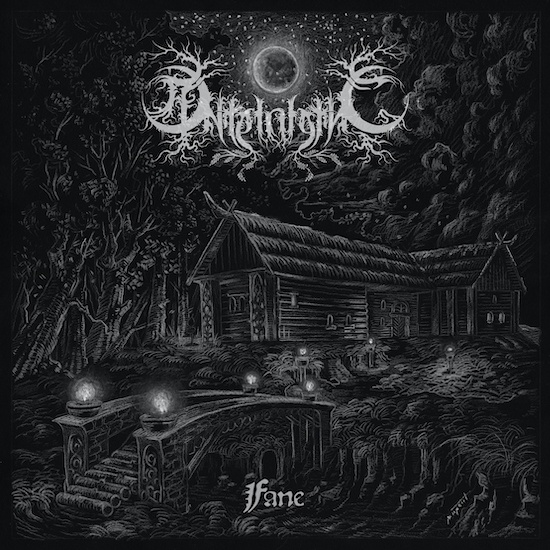 Fane is the forthcoming debut album of the British black metal band Ante-Inferno. In its inspirations and conceptions, it embraces a dark view of ancient and perilous mysteries hidden within the natural (and supernatural) world, its title representing a place where those eternal secrets persist:

“The Fane is a house of secrets, a house of stories, a vault of the treasured knowledge that mankind has forgotten; it is a chalice of truth in an age of lies. It stands within the great forest that covers this land from coast to windswept coast, its glades and glorious canopy unseen by blinded eyes. The way to its door is written between the notes of the old songs and behind the lines of the tales that reverberate with the honesty of the ages. Behind its many doors are many pathways and many are the eyes that watch from the shadows that gather around its blazing hearth. It teems with restless ghosts and creatures whose thirst for blood is as endless as the Fane itself. It is all your world is not – the eternal centre of what was and will forever be.”

In its music, the album is incredibly intense, but intense in different ways. To quote from the advance press materials, because this passage is spot-on, it combines “aching atmosphere and rabid ferocity, icy grandeur and raging flames against a midnight sky”.

No one song completely reveals all the sensations created by the album, whose songs flow into each other and represent steps along a winding path. But the song we’re presenting today through a stunning video — “Oath” — is certainly a compelling example of the album’s achievements. 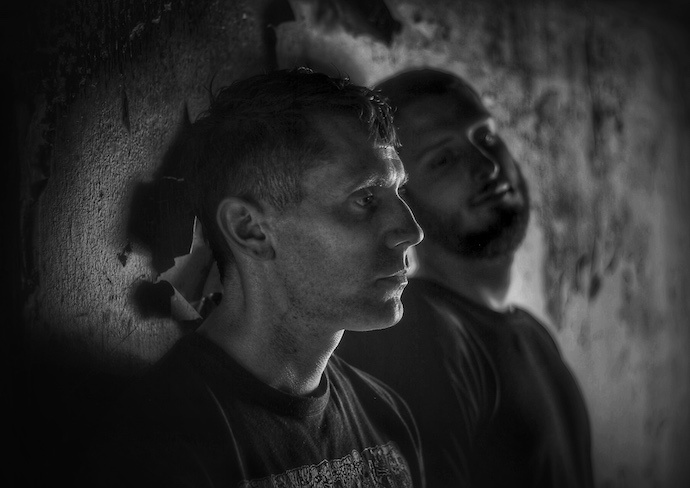 Ante-Inferno and filmmaker Jacob Lucas made a big gamble. The sweeping vistas in the video, both verdant and barren, are so strikingly magnificent and dramatic that they risked overwhelming the music. If the song had not been able to stand tall with the film, if the music had not been on par with the stunning power of what we see, the contrast could have been a jarring mistake, revealing whatever flaws or failed ambitions might have been inherent in the sound.

But, as it turns out, Ante-Inferno and Lucas judged correctly. The video beautifully suits the song, and the song authentically honors the soul-stirring and frightening  impact of the panoramas because the song itself stirs the soul — and also fractures it.

“Oath” proceeds in phases, and the imagery matches those phases. For the first three-plus minutes, the music is a wild and glorious whirl, a storming upheaval driven by neck-popping snare beats, rapidly hurtling bass notes, and a vibrant, skirling melody. As the vocalist screams his heart out, the music sweeps high overhead in ravishing fashion as the drummer delivers bursts of blasting, but the melody also undergoes variation, revealing shades of darkness and betraying timbres of longing and melancholy.

In its next phase, as the natural vistas gradually become more daunting and hostile, the song’s racing pace suddenly drops, as does the mood. The more measured rhythms becomes traumatic blows, the distorted chords channel a grim and beleaguered feeling, and the trilling guitar seems to wail and weep. There is still grandeur in the music, but it is a tragic and distraught grandeur, penetrating into the dark core of haunting natural wonders.

In the final phase, when the song surges again, harsh roars make their entrance, the rhythm section create the sounds of a rushing avalanche, and the reprise of one of the song’s central riffs is incredibly dramatic, flowing across the rampant tumult of the drums and bass in a way that now seems heart-breaking.

But that is simply our interpretation of the sounds and the emotions they evoke. Ante-Inferno shared with us these comments about the song:

‘Oath’ is a study of the macabre world that lies beyond the civilised universe that we inhabit. It is a reminder that, no matter how much concrete, glass, plastic and detritus we fill our earth with, there is a darkness that lives on at the very fringes of the realm we know and understand.

“The song and video further our investigation into subversive forms of worship, and the fear and corrupting influence of what can neither be seen nor touched – but sensed, always – in the unfettered wildness of the natural world that we seek, and fail, to control.”

Fane will be released on May 1st by UKEM Records, and they recommend it for fans of Forefather, Winterfylleth, Drudkh, and Nefarious.

The album is available for pre-order now on marble colour LP and digi-pack CD.