With 18 years of continuous work and five studio albums behind them, the Colombian band Vitam Et Mortem are now returning with their sixth full-length, which is set for release on April 13th by Satanath Records (Russia) and Exhumed Records (Ecuador). Entitled El Río De La Muerte (River of Death), it is a conceptual work that functions as an exercise in historical memory — focusing on the armed conflict that has scourged Colombia for the past 60 years. In doing so, the album makes a comparison between the Magdalena River in Colombia and the Acheron river of Greek mythology, one of the five rivers of the underworld, known as “the river of woe”.

The band’s significant years of work and ever-evolving musical explorations have resulted in a truly fascinating listening experience, and an unusual stylistic amalgam that intertwines elements of black and death metal, ritual and folk influences, and the union of ravaging brutality and mesmerizing melody. As a great example of these achievements, we present today a lyric video for a song called “Los cuerpos en el río” (“The corpses in the river”). 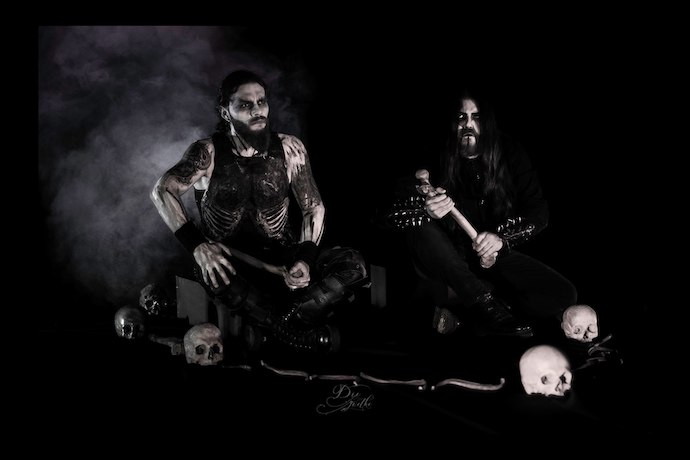 Mindful of the context of the current viral pandemic, the band have introduced the song to us (and to you) in this way: “War and violence are, without any doubts, one of the greatest plagues in human history, Colombia has suffered them during 60 long years, this pestilent outbreak has been here since our grandparents generation ripping apart the lives of thousands of people and still goes on”.

The intensity of those sentiments is reflected in the music, which seems to betray both violence and endless sorrow, translated through sound in gripping and memorable fashion.

The overture to the song seizes attention immediately, and although it is in some obvious ways very different from what follows, it is also integrally related. The gleaming guitar melody is a seductive spell, spiraling like a spectral incantation, and the sorrow-shaded singing and measured drum rhythm that join in have an ethnic folk influence. What follows is a ravaging attack of blasting drums, viciously assaulting riffs, and harsh roaring vocals. That magical opening melody, shining yet vaporous, strange yet soulful, continually reappears, yet as the song surges it now seems laden with menace as well as mystery.

The flickering leads heat the wildness of the sound, and the song also has a grim stalking aspect, while shining keyboard layers add an element of eerie majesty. The music whirls and blazes in spasms of violence — but it’s that central riff which closes the music alone (and by this time it has extended its tendrils so deeply into the brain that it doesn’t disappear just because the song ends). 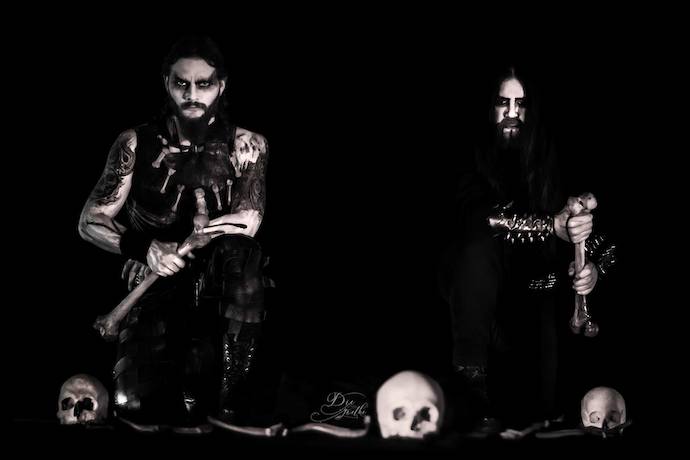 El Río De La Muerte was mixed and mastered in Stockholm by Jari Lindholm and under the executive production of Gustavo Adolfo Valderrama (Vancouver, Canada), and it includes a cover of Masacre‘s “Ritos de muerte”.

Satanath Records and Exhumed Records will release the new album (with cover art by Carlos Jácome Artworks) in a pit-art jewel-case CD edition limited to 500 copies, with a 12-page booklet. It’s available for pre-order at Satanath‘s Bandcamp page, where you can also check out the previously released track “Barquero de los muertos” (which has been made available as a free download).