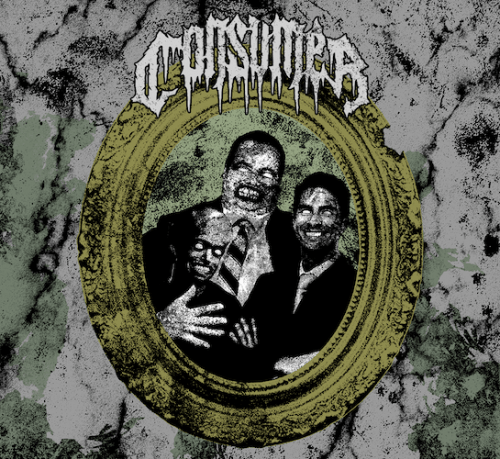 The Italian band Consumer make no pretense at all about what they’ve done on their self-titled debut EP. They confess that it is “ugly music”: “In this record we’ve put not only our musical influences, but the life-related ones as well. Its deformities and its horrors, its disharmonies and its incommunicability. We’re three different people who are united by the fact of being constantly disoriented in this world. We try to contain the problem with almost unplayable breakdowns, feedbacks and screams.”

There’s much more to the music than unplayable breakdowns, feedbacks, and screams, but what it all adds up to is mutilating punishment — maniacally destructive at times, noxious and diseased at others, and completely oppressive and hopeless at still other times. The impact is often electrifying, but just as often it threatens to beat you senseless and choke you lifeless. 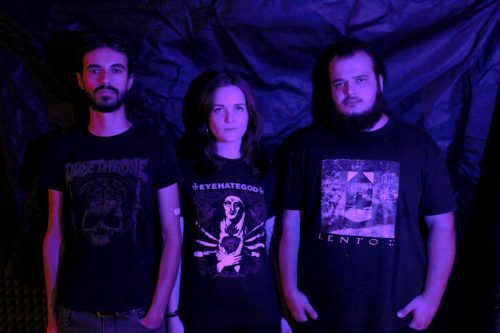 Consumer wield their genre implements of sludge, black, and death metal as a bullhorn for rage and despair and as weapons of revenge. They put a lot of effort into this EP, but you get the sense that they did it mainly as catharsis for themselves, without paying much heed to your own welfare — though maybe it will also prove to be a tonic for what ails you too.

The members of the band — vocalist/bassisit Martino Razza, guitarist Federica Sapuppo, and drummer Francesco Ciccio Paladino — were active in other underground bands in Italy before they united in Consumer. They brought the influences of some of those other groups with them, but also seem to have coalesced around a particular strategy of ruination, one that depends on monster riffs, frightening vocals, and drumming that’s capable of both bludgeoning brutishness and eye-popping athleticism.

Although there are only three tracks on the EP, they are long ones, with two of them topping eight minutes. In the opener, “Pray//Void“, corrosive radioactive chords, methodically pounding drums, and monstrous bellows and roars quickly create a feeling of doom and degradation. This gnarled beast gradually comes to life with jolting bass, bursts of rapid-fire snare, and teeth-gnashing riffage, and then takes off in a flurry of blast-beats and winding, warped, gruesomely buzzing fretwork. The vocals become screams, and the spiraling guitar creates a poisonous feeling.

The song sets up a head-moving momentum as it approaches the mid-point but then suddenly devolves into sonic calamity, the drum blows slowing, the guitar generating sounds of choking miasma and pestilent decay. When the bass guitar comes in, growling, it’s a relief, and that presages a gradual acceleration into a mad frenzy of furious blasting and crazed riffing — and then a staggering lurch in which those vile guitar tones gouge at your guts and the drumming snaps at your neck.

The jackhammering riff and boisterous drum escapades that open “Witchslayer” quickly slow into a plague-bearing trudge, once again creating a cold and oppressive feeling as the vocals descend into cavernous guttural growls and flare into tortured shrieks. But without warning, mayhem ensues in a Vesuvius-like eruption of frantic drumming and warped, blaring guitar. The rhythm section seem intent on maniacally fracturing and then grinding all the bones in the listener’s body that haven’t yet cracked, while the abrasive riffing has the feeling of something inhuman, something beyond reason.

But here again, the band quickly fall into a tar pit, heaving forward rather than rampaging, the resonance of those grotesque guitar emanation steeped in illness and misery. But the band are still devoted to methodically hammering the listener into submission. And again without warning, everything surges into madness with off-the-hook drum acrobatics, lunatic chords, and that frightening combination of belly-deep roars and scalding screams.

Sadistic and brutal, the rhythm of “Solicitous” segues from pile-driving spinal trauma into racing mayhem, while the riffing creates a match in the creation of bruising and eviscerating sound. Once again, the electrifying drum progressions threaten to steal the show, but the effect of the song as a whole is ruinous, crawling like some dying mutant beast expelling noxious aromas of suppurating decay and then unexpectedly exploding in torrents of extravagant drumming, wild guitar ravaging and that by-now-familiar combine of deep bellows and skin-splitting screams. Mind-mutilating in both its crushing heaviness and its harrowing frenzies, the song shows no mercy at all, right down to the screeching feedback that laces the closing minute 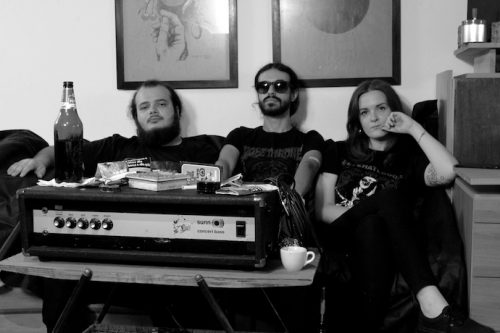 Consumer was been recorded and mixed by Giacomo Iannaci at Morning View Studio in Catania, Italy. The ghastly cover art was created by Gore Occulto Artworks.

The EP will be released on April 3rd by a big crowd of labels — Fresh Outbreak Records, Mother Ship, Impeto Records, Boned Factory, and Nut Records. For info on how to get it, check those links — and this one:

One Response to “AN NCS PREMIERE AND REVIEW: CONSUMER (SELF-TITLED EP)”